And, just like that, I've finished The Broken Earth Trilogy! The Stone Sky is the third and final entry, and it pulls off an admirable job bringing things to a satisfying conclusion. There's an interesting telescoping effect throughout the series: as we read more, we learn more about what's happening in The Stillness as the story moves forward in time; but we're also learning more about the history of the world, how things got to be this way and why. This isn't just world-building: the protagonists' only chance of making things better rests on understanding what led up to this point. For the most part we're learning things at the same time that they are, keeping a nice sense of mystery and tension through the novel. 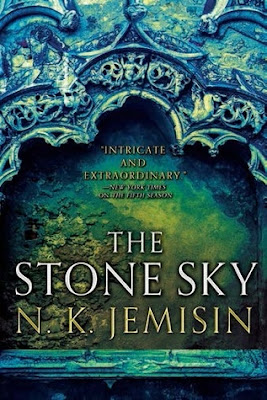 Way back while reading the first book, I was wondering whether The Stillness was a post-apocalyptic version of our Earth. Now that the series is wrapped up, I feel fairly confident that it is not. There are definitely similarities: the geological formation of the planet is similar, as are the lifeforms, the core and mantle and crust, and a single satellite in orbit; but we go, like, forty thousands years into the past of the Stillness, and never learn of anything that's clearly from our own timeline. It seems to be a fantasy world, not our own. Which isn't to say that it has nothing to say about us! But I don't think it's a direct tie-in along the lines of, say, Planet of the Apes.

The main argument I had earlier on for the planets being the same was the similar-but-not-identical language, with words like "Comm" and "Quad" that seemed like possible descendants of English. There is interesting use of language and words throughout the series, and I think I'm missing some of their significance. I was surprised early in the second book to learn of a town named Found Moon, shortly after Essun heard about the Moon for the first time. I kept wondering why it was named that, and am still wondering at the end of the third book. It seems like it can't possibly be a coincidence.

We do have a slightly clearer picture of what's up with the Guardians, though. While it isn't ever explicitly spelled out, my personal read on it is that most of the Guardians were dedicated to preserving the status quo: controlling orogenes, using them to quell most Seasons, and just surviving through the Seasons that still occur. The three Guardians in Found Moon were taken over by Father Earth and working for him; I'm not sure exactly what their mission was, but I'm guessing they were training the orogenes to turn them into weapons and eventually destroy humanity. Schaffa was then turned to a third direction, as a result of a confluence of influences: vague memories of pre-Shattering life, regret over his cumulative actions as a Guardian, and a sense of protection towards Nassun. I think he ended up with the same goals as Hoa, seeking to heal the wounds of the past, make peace with the Earth and help orogenes live in peace with stills.

As for the majority of the Guardians, my hunch is that they were somehow connected to the surviving humans on the moon who were struck by the exploding angry rock. Perhaps during that 100-year period between the failed launch and the Shattering they learned how to modify the influence of the Earth's iron shards, while keeping its power to prolong their lives and have superhuman abilities

It's interesting to think that there might have been factions even during that century, as humanity decided how best to prepare for the catastrophe. Perhaps Guardians and Lorists represented two different factions, with the Guardians as cold pragmatists and the Lorists as hopeful optimists. The Guardians' near-immortality kept their mission more or less on track through the millennia, while the Lorists' shorter and more fraught lifespans eventually stripped away much of the meaning behind their traditions.

Learning about the corruption of stonelore was really fascinating: some knowledge was just lost or forgotten, but some of it was deliberately repressed, like the Third Tablet (I think) that the Sanzed modified in order to justify their cruel treatment of orogenes. That ties in with an ongoing interest of mine about how hard it is to remain to a principle or a project across centuries, let alone millennia.

One specific piece of stonelore that we learn near the start of the first book is gates should be built out of stone instead of metal. At the time that had struck me as odd; metal is more malleable and less brittle than stone. By the end of the third book, we learn the true, forgotten reason behind that verse: it is because metal serves Father Earth, and cannot be trusted, because it could attack the inhabitants at any time. That said, it's odd to me that geologically they can trust stone: both stone and metal come from the earth, after all. I wonder if there are chemical properties of iron that make it more dangerous than stone. In real life iron is vastly more conductive, and perhaps in the world of the Stillness that means it's easier for Father Earth to control.

And man, Father Earth is terrifying! It's a trip to realize that he/it really is a sentient entity and not just a folkloric idea. Learning about what happens to dead people after they are buried in the ground is shocking and horrifying. It seems like a literal depiction of hell.

But, what Father Earth does to the souls of the dead has strong parallels to what Syl Anagist did to the Niess. Humanity did it to itself long before the Earth did. It really clarifies why Alabaster was so adamant that he not be buried after death.

Heh, I feel like I've written way too much about the backstory and nothing about the actual plot! It was really cool. I was curious how the Essun/Nassun dynamic would be resolved, it ended up being pretty sad, but in a way that felt very earned and kind of cathartic. After all of their history I would have had a hard time swallowing a happy reconciliation. I loved the focus on community, which often gets ignored or shortchanged in fantasy novels. Knowing that Castrima will survive and be able to model positive relations between orogenes and stills gives a huge amount of hope to the end of the book, despite the loss of a major character.

All in all, a really great series from a new (to me) author! I hadn't heard of N. K. Jemisin before, but it looks like she's written a lot of other stuff, and I'm very tempted to check more of it out. At least in this series, she really nicely threaded the needle between worldbuilding, character development, strong themes, clever twists, and excellent writing, feeding many different parts of my brain. I can't ask for more!