So, another great birthday gift I got was the long-awaited Cyberpunk 2077! Like many other cyberpunk nerds, I'd been eagerly anticipating this game for nearly a decade, then was scared off by the harsh reception at launch, and am now dipping my toe in after half a year of patches. 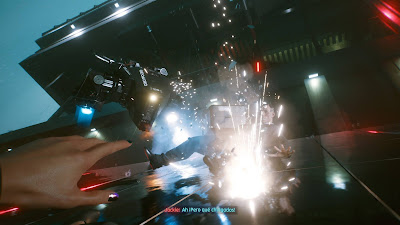 I'm still really early in - maybe ten hours of gameplay, Level 6 for my character, and I just passed the main title screen. I'll definitely have more updates later, but wanted to capture some initial impressions.

In summary: it's messy and has some frustrating bits, but is also a lot of fun and very stylish. The gameplay feels a lot like Grand Theft Auto, merged with RPG-style inventory management and character progression like The Witcher. Stealth feels like Metal Gear, and hacking is sort of its own thing.

Character creation is really cool. It's based around presets rather than sliders, which seems to be the current trend. As has been much-discussed, you can even customize your character's genitalia. All this fits in really nicely with existing cyberpunk themes and style. The game is also pretty trans- and genderqueer-friendly, letting you mix and match various sex characteristics. 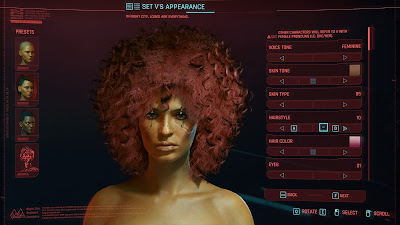 What I've seen so far of Night City looks great. It's big and comprehensible, with a really bustling street scene. 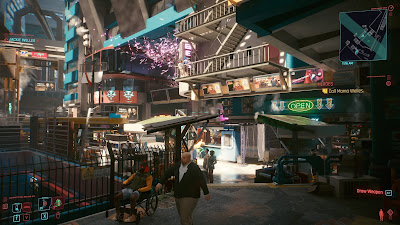 In-game artwork is pretty amazing, particularly the advertising campaigns you see all over town. They tend to be extremely raunchy but also pretty funny. 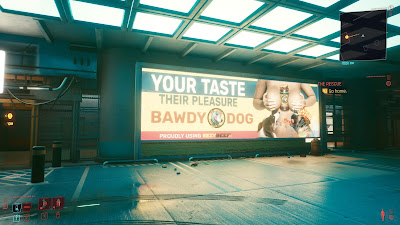 I love the character designs. Most NPCs seem to be procedurally generated, and they look ridiculous, but fortunately ridiculous is exactly what this game needs. Major NPCs are more bespoke and are just oozing with character and charm. 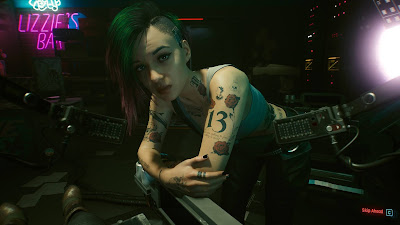 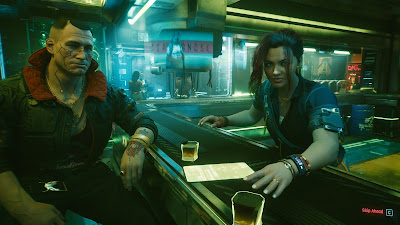 I've been delighted by the music and club scene. Cyberpunk 2077 is a welcome throwback to the Rocker-style cyberpunk attitude of the genre's inception of the 1980s and 1990s, where every major fixer meet goes down in a dimly-lit and crowded nightclub while loud music pounds in the background. I've deeply missed this aesthetic in more modern cyberpunk, and am thrilled to see it again. 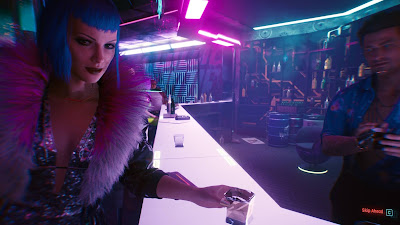 Overall performance seems to be great, on my modern but not top-notch gaming rig. I haven't run into any bugs or major glitches, barring a few minor items detailed below.

The main plot has been good so far. It's surprised me at a few beats and definitely has me curious to learn more.

I'm not as deeply versed in Cyberpunk (2020) lore as I am Shadowrun lore, but from what I can see the game seems to be true to it, and includes tons of great little call-outs in the various texts you read over the course of the game, fansites, and emails. This game is set in the 2070s but is very aware of its past in the (fictional) 2020s, which adds a lot to the depth of the world. 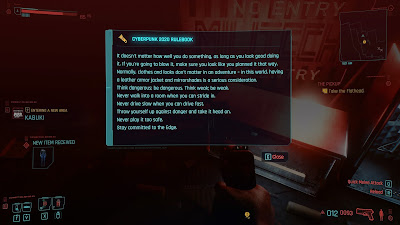 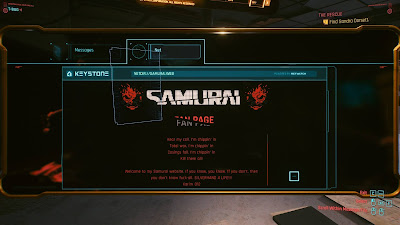 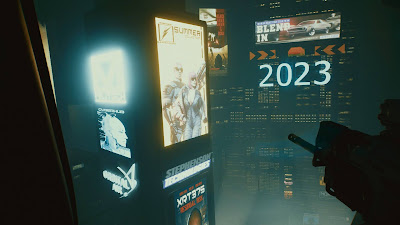 For as long as the tutorials are, there's a lot of stuff that the game doesn't seem to ever explain. I keep seeing symbols in dialogue options and I have no idea what they mean. And I'm pretty sure the game showed before how to duck back into a car while firing from the passenger window, but I've forgotten how and that information is nowhere to be found in the keybinding menu. 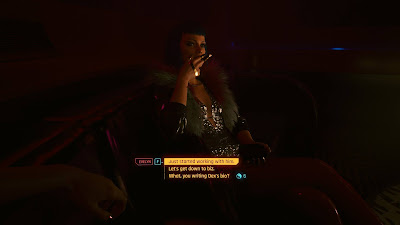 I'm still on the fence about the perspective. As a player, I definitely prefer third-person over first-person. That said, first person does match this particular game's lore and setting extremely well: you are constantly getting retinal popups on your HUD, and the game makes good, extensive use of the fact that a computer is sitting between your cybereyes and your brain, leading to lots of awesome visual effects. It isn't necessarily fun, but it's stylish as hell. 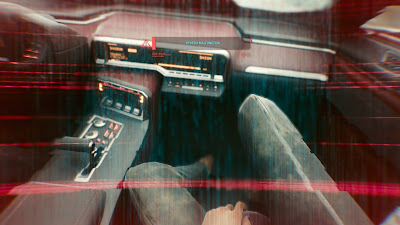 Driving a car with a keyboard and mouse sucks. Or maybe I just suck at it. Those controls are great for the rest of the game, but I kind of want to plug in a controller just so driving sucks less. I'm not sure yet just how much of the game is driving, though.

Progression is pretty interesting. You gain overall XP, which gives both Attribute points (to raise Body, Intelligence, etc.) and Skill points (which typically unlock unique abilities). You can also raise your Traits, like Stealth and Breach Protocol, by using those traits. So Traits work more like, say, Elder Scrolls stats: the more you use them, they higher they get. From what I can see, though, you can just spam the same abilities over and over again (like running Ping on an enemy) and keep leveling up your skill. It isn't necessarily bad, just odd.

I'm still early in, but so far, it seems like the most common type of side-quest is helping the Night City Police Department catch criminals. And maybe this is just me, but for me, helping out the cops doesn't seem like the most punk thing to do? More broadly, the aesthetics of the game are generally very solid, but you get occasional notes like this that makes it seem like they're missing the point. 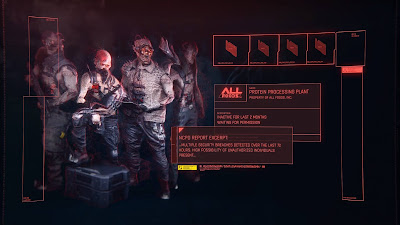 Have I mentioned recently how much I loathe inventory management in RPGs? I feel like half of my game time is spent picking up soda cans and discarded rifles, then finding out that my encumbrance is too high and spending time sorting through my inventory and selling stuff I don't want to keep. I hate it.

The general NPC situation is pretty dire. They all look cool, hustling and bustling around, but almost immediately you realize that there is a very very finite number of voice-recorded lines, and you'll hear the same one-liners any time you talk to anyone. It reminds me a lot of Morrowind, but with even less personality. I don't know why the game even bothers letting you talk to randos if they're this thin and recycled.

You can customize your character in a lot of different ways, and the main mission segments give a lot of freedom in how to progress: charge in guns blazing (quick!), try to sneak through and use silent non-lethal takedowns (endless reloads!) or hack your way through (confusing and slow!). But then it will drop you into a non-skippable combat sequence, where your 0-Firearms character needs to shoot down a half-dozen military drones while under nonstop heavy fire, with the game abruptly ending if you get hit too many times. This game doesn't remind me much about Deus Ex so far, but this one particular element is straight out of Human Revolution and Mankind Divided.

Probably my biggest gripe so far at ten hours in is the complete lack of roleplaying. In dialogue, you get one option to continue the conversation, and maybe several other side-questions you can choose to ask before continuing. That's it. I haven't seen a single branching conversation or quest objective yet. This was particularly galling in an early encounter when some heavies were trying to get my PC to give up some data. I totally get that the plot requires me to surrender that data, but it didn't fit with my conception of my character at all to roll over. But I had no choice. Which, the more I think about it, probably shouldn't surprise me, since The Witcher also didn't have much in the way of choices, with at most getting to choose between Geralt being a sarcastic asshole and being a mean asshole. But you don't even get the "sarcastic or mean" choice in Cyberpunk 2077. Given how thoroughly you can customize every aspect of your character, it feels really weird to get no say at all in their personality or values.

That's it for now! I had more lows listed than highs, but I am still having a great time.