As I've previously mentioned, once I decide that I really like an author, I take pains to learn as little as possible about any of their books before I start reading them. That's now the case for China Mieville as well. I picked up Embassytown with literally no idea what it was about, and about one or two pages in I went, "Oh, huh, I guess this is a science fiction novel!" 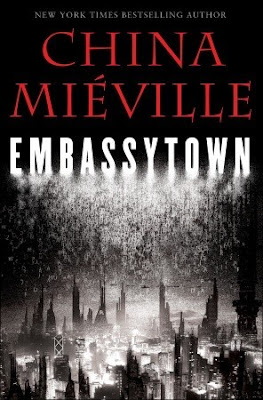 I tend to associate China more with the "weird fiction" of his Bas-Lag books, but I shouldn't have been surprised that he'd do something different, after the awesome detective fiction of The City & The City and the history writing of October. I guess that the Bas-Lag books do sort of nod at steampunk a bit, but Embassytown is a much more classic science fiction setting, complete with interstellar travel, alien species, androids and more.

Of course, he makes all of these things his own. I think China's single best ability in his fiction is his skill at inventing something indescribable and then attempting to describe it. In Embassytown, the biggest example of this is probably the "immer", the sort of underlying reality through which people travel between stars. The narrator Avice tries to explain the immer to her husband and to us, trying out various metaphors and realizing that they all come woefully short. There are certain things that she can say with confidence, like that the immer is older than our universe (and in fact has supported at least two universes before ours), and that it's dangerous, and that the time to travel between two points via the immer does not correspond to how distant those points are in regular state. But when it comes to the feeling of the immer, the way it works on you, the way you work at it, she can gesture at it but never really explain it. It reminds me a bit of HP Lovecraft, but I think that China is better: he actually attempts to describe the indescribable instead of merely stating that they're indescribable.

He's also really good at slowly revealing information. He'll introduce a thing, and let it be a mystery for many chapters. The narrator and the characters will wonder about it, find evidence, draw closer, and eventually reveal the mystery. From then on he doesn't belabor the mystery, since it's over, and becomes accepted reality. But the journey is great, and China gets a lot of high-stakes mileage out of it instead of just introducing it and immediately pushing the story forwards. (I'm thinking in particular about the slow reveal about exactly what effect EzRa is having on the Ariekei.)

And the worldbuilding itself is also really great, maybe not quite as dense as the Bas-Lag books but very well-done and intriguing. Over the course of the novel we hear about the Terran diaspora, the Brennan empire of established planets and far-flung planets, relations with the indigene. Most of the focus is on Embassytown and the planet it resides on. "Biorigging" is a fun concept, a novelty even within the novel, of engineering items out of living, often sentient matter (like portable "batteries" that follow the Ariekei to help provide more energy when needed; even weapons that can detect threats and fire projectiles).

The most interesting stuff, though, is with the Ariekei themselves. Due to an evolutionary quirk, they have two mouths (one apparently a feeding apparatus, the other originally a specialized organ for sounding alarm). They speak simultaneously out of both mouths, which is rendered in the book with two pieces of dialog vertically placed on top of each other with a line separating them. As the early settlers eventually realized, the language (or rather the Language) was even more unique, in that it wasn't really a language at all. Language gives symbols and markers by which we denote things and concepts in the world. The Language, though expressed audibly, is really just a manifestation of thinking, almost a form of vocal telepathy, with each individual automatically expressing the true thoughts inside their mind. It's a very odd and cool concept, and much of the novel deals with how the humans are responding to that dynamic, for their own advantage and/or for greater cooperation.

Looking back over Embassytown, it seems to be a novel about language, metaphor and meaning, which is a really fun and ballsy theme for a novel. It's really twisty, with some things repeated nonsensically throughout the whole book ("The girl who was hurt in a dark place and ate what was given to her"), and a great progression of revelations about how things work. Some are things we learn early and the Ariekei learn much later, some are things the narrator learns early and tells us about later, some are things we all learn together.

Some early stuff ties together really satisfyingly later in the book, like Bren and lying and Scile. A few other things seem to be red herrings. Ehrsul feels like a potentially significant character in the first half of the book, but never really does anything over the course of the novel. And while the immer stuff is some of the most fun writing, it doesn't turn out to have much of anything to do with the main events. But, I suppose you could draw some thematic connections back to the central language/Language concern of the novel. Ehrsul's existence poses an existential question about thinking, which in turn connects to the possibility of relating between fundamentally different beings. (Perhaps Ehrsul is communicating with humans in a way similar to how humans communicated with the Hosts, taking advantage of a fundamental misunderstanding. It's interesting how some people, like Scile and Ez, instantly dismiss Ehrsul, which seems similar to the Ariekei's dismissal of non-ambassador Terrans. And I wonder if and when the New Language people will speak with Ehrsul. And I wonder why she isn't interested in speaking with them.)

Embassytown is pretty different from the other China Mieville novels I've read, but one similarity is that I'm left with a sense of awe at all of the incredibly creative stuff that he invented for this book, and then presumably abandoned. A lot of authors would happily make entire careers out of exploring Bas-Lag or the Immer, while China does the work to create this vast and rich universe, and then gets one (great!) book out of it and moves on to the next thing. I do really like how these worlds continue to linger in my mind after the book is over, and it is exciting to think that I may encounter yet another new world from him in the future.