The Spirit of Science Fiction is yet another enjoyable entry in Roberto Bolaño's repertoire. This one kind of reminded me of The Savage Detectives, although it's much shorter and with a far smaller cast of characters. It's set in Mexico City, primarily focusing on poets and the writers and artists and others who they associate with. The narrative is kind of loose and impressionistic, a collection of vignettes and fragments that orbit around a few key characters and concerns, leaving the reader to infer meaning. 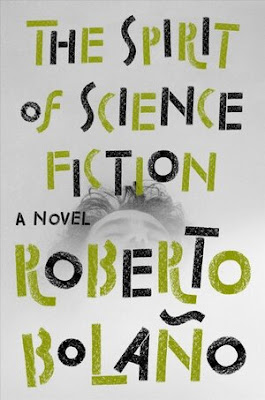 This is yet another book of Roberto's, along with "Distant Star", with a title that sounds like it could be science-fiction but is definitely not. This title refers to the passion of Jan Schrella, a young Chilean author. Jan loves science fiction, but even more he seems to love the science fiction community: the constellation of authors, conferences, journals and magazines. Several of the "chapters" in this book consist of letters that Jan writes to his favorite science fiction authors, like Ursula K. LeGuin and James Tiptree. Those letters are pretty fascinating: lecturing, hectoring, condescending, pleading, bragging. Sometimes it seems like Jan is just writing for the sake of writing, with the act of communicating across the border more important than what he has to say. Other times he's passionately trying to convince the author to not just write, but to use their platform and power to take action that will help the impoverished poor, the dispossessed, outsiders.

We read these letters but don't get much insight into their writing. For a while I thought that they were sardonic, a cheeky avant-garde prank. Based on Jan's later conversations about science fiction, though, I now think that they're the opposite: deadly earnest, the kind of painfully embarrassing hauteur that only a seventeen-year-old-boy can write. Bolaño may be engaged in a sort of self-flagellation here, as the final letter from "Jan" is signed Roberto Bolaño.

I do love those letters. One of Bolaño's many gifts is how many novels he can write without conventional narration, instead stitching together other forms like encyclopedias or police reports or newsreel footage. Besides these letters, we also hear fragments from the poets' lovers, describing their nights and mornings together from another perspective, or sit in on poetry readings in airless university classrooms. These are intermixed with more traditional scenes, describing the exciting sprawling night at a house party and the intense feelings welling up in the narrator's chest.

There are a lot of feelings in this novel, and another thing I like is how few of them reconcile. Remo spends an evening listening to the poetry of an autodidactic motorcycle mechanic, filled with great unease and distress; we never really learn why he feels that way, but it's a genuine reaction that he can't articulate.

It's kind of funny to see the same tics continue to pop up in multiple of these books: yet again, we have  sisters who are both poets, one a virgin and one very much not, light and dark. I think this is maybe the fourth book with a similar pair of characters. I'm a little curious if they're based on a very influential acquaintance in Roberto's life, or just an idea that he really liked and kept returning to.

Apparently this was one of Bolaño's earlier books, and it doesn't yet have the audacity of The Savage Detectives or 2666, but you can definitely see him exploring concepts that he'll return to later. His skills are already in fine form, and I really enjoyed reading this wistful, curious, eager little novel.