Never Gonna Give You Up

I wasn't sure what to expect from Kazuo Ishiguro's "Never Let Me Go". It was a gift from my brother, and I haven't read anything from the author before. It turned out to be a really lovely book: intriguingly written, with a very natural style, a slow burn of discovery and revelation, and a heavy blanket of melancholy feelings resting over the whole thing. 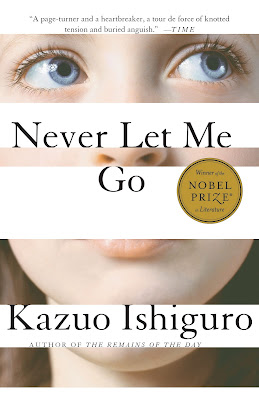 The narration is probably my favorite aspect of the novel. It's told in the first person as a sort of ambling reminiscence. It feels a lot like how real conversations go: the narrator will start telling a story, then explain why that story is important, then go back to describe something that happened earlier and how that led to the current story, then mention how all of this contributed to some later event. It sounds messy, but it's easy to follow, and I never found myself lost. The description mostly progresses chronologically forward in time, but with a lot of whorls and eddies along the way, and as the narration draws closer to the presence, reminiscing itself becomes important to the story: how two people bond by recounting a shared experience from their childhood, or how irritation will flare when one person claims not to remember doing something before.

The heart of the novel is the relationship between Kath, Ruth and Tommy. Kath and Ruth in particular feel especially real and relatable: they have a very intense friendship and rivalry full of bitter, hurt feelings and pride, interspersed with genuine affection. Ruth definitely comes off poorly as a whole: she gains and betrays confidences, can be very deceitful while carefully avoiding outright lies, and is powerfully controlled by jealousy. Kath in contrast seems perhaps overly naive and sometimes hold grudges, but overall is far more likeable. (That said, I do wonder what this story would look like told from Ruth's perspective.)

As a reader, it's pretty obvious from early on how Kath and Tommy feel about each other, but it goes unsaid for almost the entire length of the novel. That seems to reflect their own experiences as well, with Kath in particular maybe being afraid to even admit to herself how she felt.

It takes a very long time to learn exactly what the situation is with the students at Hailsham; while the tone of the book is very literary and slice-of-life, it is ultimately kind of a science-fiction book, with the exact nature of the sci-fi unclear for a long while. Part of this slow burn is the classic spec fic trick of everyone in the world taking something for granted so they never explicitly describe it, and we as readers only gradually infer it through the context. But the dawning revelation also matches the students' experience, where they only gradually and belatedly realize how the world works and what their role in it is.

The book as a whole is very odd to place in time. There are clones in this world, which is definitely futuristic; but the world also uses phonographs and cassette tapes, which are not. The novel was published in 2005, so CDs were already dominant by then and digital music was starting, neither of which were ever mentioned in the book. There are some references to decades, like a photo from "the 50s" and research done in "the 70s", and near the end there's talk about how things changed after "the war". The main thing I'm wondering is whether those references are to, say, the 1950s or the 2050s? If the former, then we're probably in an alternate timeline; I imagine this being something like HBO's Watchmen series, imagining what the world would look like in the presence if research in the past had focused on biological rather than digital topics, resulting in some areas being more advanced and other areas less so. If the latter, then this might be a byproduct of the system around Donors and Carers: deliberately keeping them away from connections to the modern world, and instead creating a kind of Potemkin country for them to experience growing up in.

This was a good read: poignant, thoughtful, affecting. While technically sci-fi it doesn't really feel like a sci-fi novel at all, just using it as a simple and devastating background that heightens the experiences of these young, hopeful children as they grow up in a challenging world.