Yep, I'm continuing to devour any and all of Thomas Piketty's books. I recently put two of his new ones on hold at the library; I need to wait a while longer for A Brief History of Inequality, but I almost immediately received Time For Socialism. 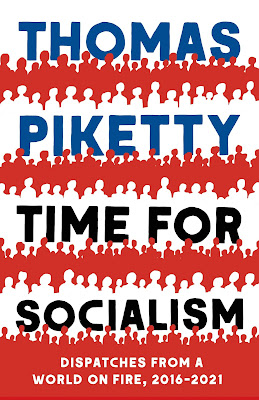 Unlike his other books that I've read, which I'd describe as tomes written from an academic background but oriented towards the general public, TFS is a compilation of monthly columns that Piketty wrote for Le Monde during the eventful years of 2016-2021. The book is subtitled "Dispatches from a World on Fire", which I'd say is a fairly accurate description of a period starting with Brexit and Trump and ending with COVID-19 and Black Lives Matter, all set against the ongoing explosion of economic inequality and rising ethno-nationalism that Piketty has worked against for decades.

Being newspaper columns, these pieces are shorter, though interestingly of rather variable length. Piketty is generally responding to major events of the last week or two, but contextualizing them in terms of broader trends, most notably the disaffection of poorer people with globalization. Like his major works, though, he makes excellent use of charts and graphs, plotting out how schisms have evolved over time or who benefits from certain policies. A lot of this is rather familiar, especially for those who have read Capital & Ideology, and some ideas are repeated across multiple columns, but it is helpful to have another set of concrete examples to refer to.

One cool thing about these columns is that they were written explicitly for French people living in France, unlike his books that are aimed at a broader audience. As a result, he spends a decent amount of time getting into the micro of France's particular issues. One example is the reform of their pension system; apparently, for decades it's been a very balkanized system, with different schemes based on whether someone worked in the public sector or the private sector or a non-profit or as a homemaker, etc. Of course, today most people will hold many jobs throughout their life, possibly across multiple sectors, and as a result nobody really understands what to expect from their retirement: the system as a whole is well-funded, but completely opaque. Piketty critique's Macron's vague proposal for modernization, and also makes a forceful push towards greater equity: both by requiring higher-income people to fund the system (as in the US, French people don't need to pay in anything after exceeding a certain annual income), and also by considering life expectancies and social class (poorer people tend to have shorter lives, so they spend fewer years in retirement, so even if they received the same monthly payments as wealthy people, their total payments over their life will be a transfer to the state, while a long-living wealthy manager will receive more than he paid in). Anyways, that's one of those hyper-local things that is unique to France, but also a nice concrete example that can be inspiring for finding similar inequities in our own systems.

As with "Capital & Ideology", Piketty's big fear is the political-economic realignment underway, with far-right parties courting lower classes with a mix of ethno-nationalism and promises of financial support, while left-wing parties are increasingly associated with the cultural and economic elites. You can tell that he has a healthy amount of disdain for Macron, who has exacerbated the dynamics by giving a massive tax cut to the wealthiest French citizens while proclaiming the virtues of globalism. Still, Piketty is always solution-oriented, and many of his columns contain concrete proposals for policy actions that could increase equality and lower the risk of reactionary revolt.

Along with France's interior concerns, Piketty also pays a lot of attention to Europe. He sees the formation and evolution of the European Union and its market as kind of the original sin that led us to the predicament we're in now: back in the 80s, international treaties liberalized the flow of money and people across borders, but did not set in place any kind of overarching budgets or accountability. This led to what he variously calls "fiscal dumping" or a "race to the bottom": since a billionaire can transfer his assets to any country with the click of a button, nations are heavily incentivized to slash rates as low as possible to persuade the wealthy to keep their wealth inside their borders.

That isn't at all to say that Piketty wants to abolish the EU; rather the opposite, he sees transnational cooperation as being essential to ensure equity and to tackle existential crises like climate change. But he believes that we badly need accountability along with freedom, with visibility into the flows of wealth and enforcement to pursue bad actors.

To that end, he champions several concrete proposals to reform the EU. One big item he frequently mentions is the Manifesto for the Democratization of Europe. This envisions a shift somewhat like the United States' shift from the Articles of Confederation to the Constitution. In the current status quo, a tiny nation like Luxembourg can singlehandedly veto any reform supported by 99.9% of Europe's population. Piketty dreams of a new Europe with a representative assembly that is accountable to its constituents and empowered to create meaningful change, a powerful antidote from today's status quo where "Europe" makes decisions behind closed doors by unelected bureaucrats and national politicians can deflect any blame onto Brussels.

And, while Piketty is primarily focused on the eastern side of the Atlantic, he also behaves as an America-whisperer at times, seeking to explain our chaotic movements of the last six years in terms of long-term trends in the Western world, particularly where we are following in the movement of the  Belle Époque or where our history of racial conflict presages the rising racism in France. He recounts across several columns the seemingly bizarre reversal of the Republican and Democratic parties from the Civil War to the 1960s, explaining the incremental steps taken along the way and how they reflected the evolving cleavages in the electorate. He points excitedly to America's extremely high marginal tax rate in the middle of the 20th century and how it coincided with our greatest period of economic growth, giving the lie to the idea that lower taxes unleash growth. He makes a very persuasive argument that America's world-leading investment in education starting in the 1800s led the way for our dominant economic position in the 1900s. Anyways, it's interesting to see ourselves used as an example for other countries, much like it's interesting to see France used as an example for us.

All in all, another great little book from the author of great big books!