Strike! is probably my favorite non-fiction book that I've read in the past five years, and maybe my favorite history book that I've ever read. I find myself regularly thinking about it in many contexts: understanding current labor struggles, imagining alternate systems of power, recognizing the hidden history of particular American geographies.

I've been meaning for a while to read other books by the author, Jeremy Brecher. While he seems to be best-known for that particular book on the history of labor in America, he seems to have very broad interests along generally left-aligned social policies; in particular, he has written more extensively about globalization and climate change than about labor. Of course, all of these issues intertwine, and it's likely for the best that he doesn't overly specialize in one particular area. 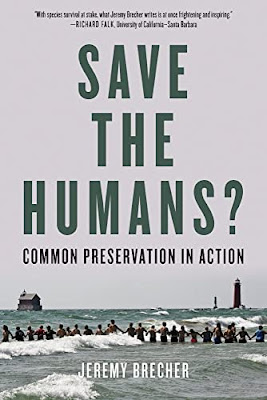 I decided to pick up Save The Humans?, mostly because it's one of the most recent books he's written. It ended up being an interesting and compelling read; not as visceral as Strike!, but very cogent and relevant.

The structure caught me a little off guard. Rather than a straight polemic, it's more of a polemic wrapped in a memoir. He loosely spins out his biography, being born to New Deal parents on the eve of World War II, through his involvement in "the 60s" (which he notes ran roughly from 1965-1975), the process of writing Strike! and his journalism and professional work since then. Along the way he describes his budding political consciousness, from early activism against nuclear warfare through racial justice and economic justice, then a grounds-eye view of the birth and devastation of financial globalization and the flight of blue-collar jobs to other countries, culminating in the death sentence that climate change poses to us.

Strike! had a powerful message, but one that you had to infer. Save The Humans? is more explicit in its messaging, and Brecher is careful to lay out possible courses of action along with his analysis of the problems we face. Fundamentally, we as a species are wired to make decisions based on the benefit to ourselves or to those closest to us: our family, tribe or nation. In the past this has been beneficial, in a bleak Darwinian struggle for resources. Today, though, the problems we face can't be solved by individuals acting in their own self-interest; in fact, that very tendency has caused and continues to exacerbate our problems. If a rival nation is stockpiling nuclear weapons, then our instinct is to stockpile those weapons ourselves. If a river is already dirty because someone else is dumping waste in there, we feel entitled to dump our own waste as well. While in the past these tendencies caused small harms, today they lead to enormous, species-threatening harms that could result in a catastrophic end to human existence on Earth. In order to break out of this spiral, Brecher thinks we need to fundamentally shift our mindsets from individual action and benefit towards collective action and benefit: when faced with a decision, not picking the choice that leads to the greatest outcome for ourselves personally or for our family or nation, but the best outcome for the human race and our planet.

Brecher never uses the phrase "game theory" in the book, but I often found myself thinking of the Prisoner's Dilemma. We can have a great number of people who are all acting with the most rational interest, and end with the worst possible outcome for everyone. The classic Prisoner's Dilemma tends to suggest that the solution is the creation of a higher power or authority that can override self-interest. Brecher suggests a kind of bifurcated approach that combines bottom-up and top-down activism and enforcement. He's a passionate believer in democracy and individual action, with moral authority flowing from small communities of people, but he recognizes that these small communities have little chance of standing against the large bureaucratic global powers that largely run the world today: corporations and governments. He envisions new transnational organizations, authorized through groups like the UN General Assembly, that take their direction from small-scale and wide-spread activism but that have sufficient power to compel major actors to behave. He sees encouraging examples from the past century, including moral crusades like those of Ghandi and MLK, divestments and boycotts against South Africa, broad alarms against nuclear proliferation, and even sees retroactively encouraging outcomes from the peace movement against the Vietnam war.

While not as exciting a book as Strike!, I did thoroughly enjoy Save The Humans?. In retrospect it's kind of a summary and updating of all the various books Brecher has written over the years, and I think a reader could get more detail and inspiration by checking out his earlier books, but this one does a fantastic job at showing how all these topics are inextricably connected and how action taken in one sphere can help all the others as well. It can be hard to avoid doom-and-gloom feelings when contemplating climate change, and Brecher doesn't sugarcoat the problems we face, but does offer much encouragement in providing a vision for how we could meet and overcome these challenges.