I was impressed by Parable of the Sower, and finally got around to reading the sequel, Parable of the Talents. It picks up chronologically after the first one ends, but tweaks the format a little bit, bringing in additional voices and commentary to open up the story a bit more. It's just as dystopic as the first novel, and somehow even more bleak, but in an earned fashion that feels grounded in real problems and points the way towards possible solutions, rather than wallowing in grimdark fantasies. 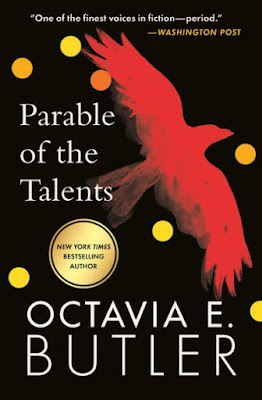 Like the first book, the story is mostly conveyed through Lauren Olamina's journal entries, each dated and written shortly after the events she describes. Also like the first book, these are usually prefaced by a verse from Earthseed: The Book of the Living. By this point in her life Olamina has published the book and has a full conception of this new religion, so it's much less about her figuring things out or expressing them and more about convincing others.

The book as a whole, though, is not written by Olamina, but rather by her daughter Larkin. Larkin introduces each section, glosses the background of events, and often provides bitter commentary. Larkin is not a fan of her mother, or of Earthseed: she faithfully reports the facts of Lauren's life, but makes it clear that she does not approve of her choices. While most of the actual words are Lauren's, Larkin also brings in some short passages from her father Bankole and her uncle Marc, providing brief first-person insights from these important people.

I think of both Parable books as staying balanced between the macro and the micro. On the macro scale, Butler was writing thirty years ago about problems that plague us today: global climate change, warming weather patterns, rising sea levels, a coarsening of American society, deep mutual suspicion between police and civilians, sagging American exceptionalism and a call for jingoistic renewal, accelerating gaps between rich and poor, dominance of wealthy and powerful corporations, a political system that seems strung between inefficacy and cruelty, increasing drug abuse, public health pandemics. On the micro level, she's writing about the particular experiences of Olamina, the community she was born into, and the community she creates around herself: the struggle to get food in an increasingly arid biome, walking a freeway with other desperate refugees, deciding whether to find safety in anonymity or popularity.

One seemingly macro element is the 1932 presidential election. One candidate is the dull, frumpy, old-fashioned vice president who seems to promise more of the same, when nobody is happy with the same. The other candidate, Andrew Steel Jarret, is a fascistic demagogue who promises to "make America great again" by returning to its core values and excluding anyone who doesn't belong. There are some obvious parallels to Trump, but as the book continues it's clear that Butler intended Jarret as much more of a theocratic Inquisition-like figure: Jarret is the founder of Christian America, which actually reminds me much more of the Leviticans of Ameristan in Neal Stephenson's "Fall". This is a perverse nationalistic religion that takes Christ off the cross and hands him an AK-47, ready to slay anyone who doesn't follow him.

Like in our own timeline, the presidential election seems remote to many characters in this book: they feel the outcome won't affect them, and vote based on vibes or to express their protest of the system as a whole. Nobody thought it was possible, but Jarret wins, and casts a huge shadow over the rest of the book despite never actually appearing.

He has a big influence in his direct actions, most spectacularly by declaring war against the seceding state of Alaska and its ally Canada. Ironically, this has almost no effect on Olamina's precious community of Acorn. But his election also has a huge indirect impact on the culture as a whole, emboldening religious zealots to take actions that would have been unthinkable before.

Much of the middle section of the book takes place after "Jarret's Crusaders", a paramilitary wing of "Christian America", seize control of Acorn and turn it into "Camp Christian", a brutal re-education camp. It supposedly exists to rehabilitate the cultists, petty thieves, homosexuals and other undesirables, turning them into reliable patriotic Christian Americans. In practice, nobody is ever declared rehabilitated. It is just a brutal torture prison for slaves. Everyone is made to wear a high-tech slave collar, causing immense pain if they try to escape or merely at the whim of their tormentors. There are cruel beatings, senseless executions, and countless rapes of the women. This is all terrible, but made even more sickening by the faux piousness of the "teachers", who are typically married and living respectable lives in public, while somehow justifying their terrible acts to themselves.

Prior to Camp Christian, Olamina was pursuing an ambition of promoting Earthseed by making Acorn into a sort of model community: self-sufficient, but friendly and helpful to its neighbors, able to offer safety from the gangs and criminals roaming the land, and able to teach children to read and write and the precepts of Earthseed. She has a vague sense that, beyond a certain point, Acorn will grow too big, and will be able to divide into more communities, gradually spreading the word.

Instead, Lauren spends 17 months in living hell. Her husband is murdered at the start, her daughter snatched away, and over the term many more of her friends are killed. They eventually manage to get free and take their vengeance: not due to any great plan or action on their part, but the stupidity of their captors and the help of a natural disaster. After this experience, Olamina is understandably opposed to restarting Acorn or otherwise providing a permanent target to Jarret's Crusaders. There's a diaspora, where the surviving members of Earthseed split into small groups and fan out through northern California, Oregon and Washington, taking on false identities and seeking to avoid attention.

In the end, Olamina rediscovers her passion for proselytizing. She begins to reach out, one-on-one with strangers in towns she is passing through, spending days with people to get to know them and share verses of Earthseed. We then fast-forward several decades to when Earthseed is a thriving and influential faith. I would have enjoyed reading more about this transition - it would have been a lot more fun than Camp Christian! - but we get the general gist of it. Olamina eventually makes contact with some bright, wealthy and bored childless people who are intrigued by Earthseed and start giving her the resources to scale up her mission. They help her put her book online, fly across the country to meet other people, and organize larger lectures for her. Over time Earthseed becomes a cross-cutting community: still very active with direct service to the poor and illiterate people of America, but supported by many prominent businesspeople, lawyers, politicians, entertainers and other influential people.

It's interesting to think of these books as science fiction. From early in the first book, Lauren has been talking about how mankind's destiny is to spread among the stars. I imagined that we might be reading a lot about space ships and stuff. Instead, the contents of the books are mostly a dirty-regressed Earth: there are a few technological advances, but mostly people are walking instead of driving, reading paper books instead of browsing the Internet, listening to radio instead of watching TV. In this book, Olamina expresses why that interstellar Destiny is so important. Throughout history, mankind has constantly fought stupid, pointless and wasteful wars against itself: wars between tribes, between religions, between nations. This causes so much needless suffering and has held back our advancement. Because of this, Olamina believes it's critical to make people passionate about a shared, common goal: something that will unite them and overcome our biological instinct for conflict.

It's a cool idea, and at least in this book, seems successful. Stuff still isn't great by the 2080s, but it seems like the worst days of the Pox are in the past and society is healing, at least partly thanks to Earthseed. The book ends with the first (ugly!) spaceships lifting off, joining generation ships that will undertake incredibly lengthy voyages towards the Destiny. Olamina herself won't be able to join them, but she seems to take comfort in seeing her vision fulfilled.

So the macro level ends up much better than where it started, but on the micro level, things are pretty sad. Lauren and her brother Marc are badly estranged: Marc became a minister in the church of Christian America, finds Larkin, and lies to both her and Lauren to keep them apart. Larkin and Lauren finally meet near the end of the book, but too much time has passed. Lauren is (understandably!) bitter and angry at Marc; Larkin is put off by Lauren's intensity, and feels an unfair-but-understandable sense of abandonment. Despite Marc lying to her, he's the only family Larkin has known, and a more important relationship to her than her own mother.

This is definitely not a feel-good book! But it is a good book. Hard to read and not offering a lot of comfort, but with a seething sense of anger at injustice that feels really compelling. It's wild to see how foresighted Octavia Butler was when writing this book nearly 30 years ago, in a much different world before 9/11 or An Inconvenient Truth or Citizens United. Dystopias by definition aren't fun, but they can be very valuable warnings to us, and this one is definitely worth heeding.