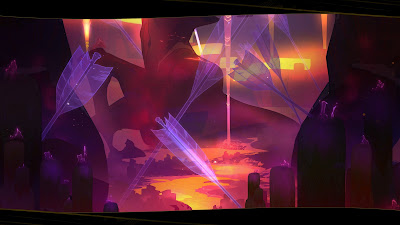 I enjoyed it a lot. Let's do a quick run-down.


The characters. I really loved how varied they were, how distinct their voices were, their relations with one another.  You naturally make favorites along the way, which adds to the tension of some choices you have to make, but all of them are appealing in their own way. 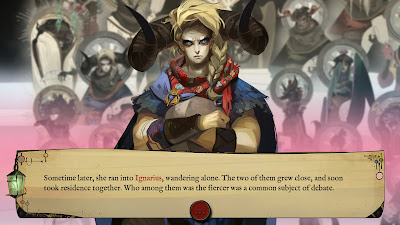 Reactivity. It's really pretty astonishing how many permutations the game can go through, based on who stays and who leaves, and everything is coherent and makes sense. This is expressed in some really remarkable ways, too, with my favorite probably being how the lyrics of the final song that plays over the credits change to reflect what happened in your game. 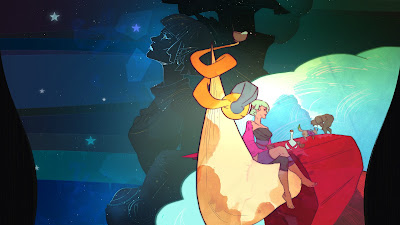 Character creation. Unlike Bastion and Transistor, which had defined and detailed protagonists, Pyre lets you create your own Reader. You can select your gender, your background, your motivations. This is done in a really natural dialogue-driven way as the game unfolds, not on a standalone screen prior to the start. There aren't any visual changes associated with it, but the game honors your selections and it subtly affects the later dialogue. 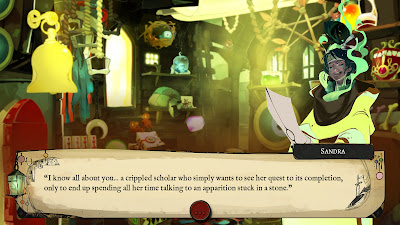 Romance. Okay, "Romance" is way too strong a word for what this game has; "emotional connections" might be better. There's nothing near the depth or intensity you'd find in a BioWare game or similar. But the range of feelings and relations are really remarkable. As is my wont, I pursued a "Romance All The Things" path, clicking every dialogue option available to express interest in my fellow exiles. And... it's complicated! Jodariel acknowledges your interest and gently makes it clear that she does not reciprocate. Sandra becomes increasingly standoffish as you show interest, and in my case our relationship culminated in a really interesting state that kind of reminded me of my beloved Digital: A Love Story. 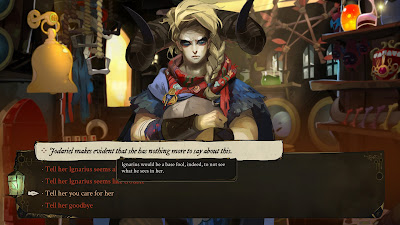 Music. I almost forgot to include this, just because I now take it for granted with a Supergiant game! It's really wonderful. As with Transistor, the vocals are especially well-done, both on their own terms and how they're presented in-game, with every voice tied to a specific character. 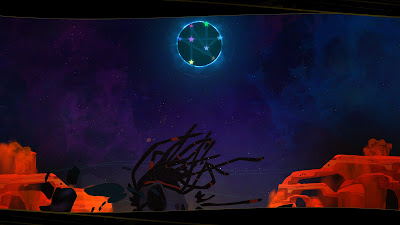 Art. Again, it's Supergiant so I'm not surprised that it's wonderful. It's a real treat to see how they change and evolve from game to game; the high tech Art Deco of Transistor looks nothing like the storybook cartoonish drawings here, except that they both look fantastic. 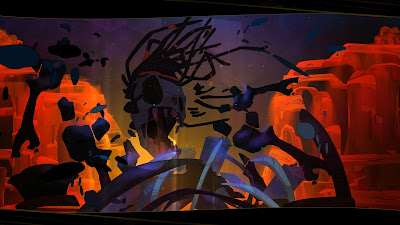 Environments. Particularly within the Blackwagon, I was amazed at the sheer quantity of interactable items that you automatically collect over the course of the game and how great they all looked together. 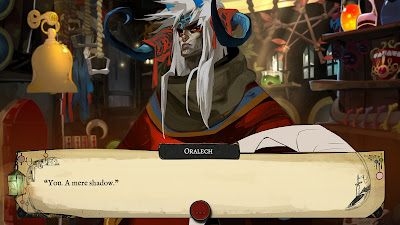 
Non-failing defeat. The game really emphasizes that losing a match does not end the game, and that the story will continue, with different consequences, if you lose a regular or liberation Rite. I really appreciate all the work that must have gone into that, but I'm hard-wired to win all my battles in RPGs, so I would invariably reload as soon as my opponents won a match. That's on me! Not the game! But it still wasn't fun. 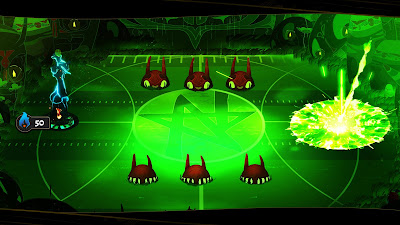 Themes. More specifically, my confusion over whether the game really has any themes; it probably does, but at the end of the game I was left uncertain whether we were meant to believe that the Rites were valuable, whether it was a noble tradition or not. There's constant talk of the enlightenment one receives from participating in them, and I'm not sure how to square that with the talk of injustice in exiling in the first place. 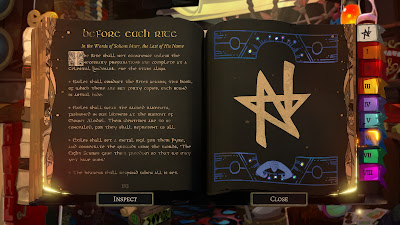 Talismans. On the one hand, they were really cool, with unique abilities that can drastically change your strategies, or just linearly boost your primary statistics. On the other hand, it felt incredibly limiting to just have a single slot, and I only used a tiny fraction of them over the game. 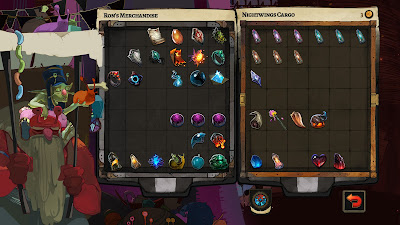 Economy. The gameplay is a basketball sports game, but everything else about it feels like an RPG, and that includes the frustrating economy. I found myself falling into the trap I do in every RPG: hoarding too many items, not spending money, saving consumables for "later" and never using them. That's on me, for the most part, but I have a particularly fierce love for the rare RPGs that get economies right, and this game didn't rise to that. 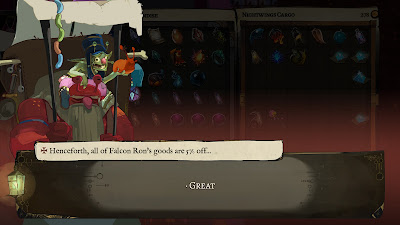 
Gameplay. I was kind of surprised at how much I was enjoying the Rites early on, but I became less enthusiastic as the game progressed. It's always frustrating when you're trying to do something and it isn't happening; in my case, that was usually me angling into my opponents' pyre from the side or behind, only to run past it and get banished before I could plunge in. 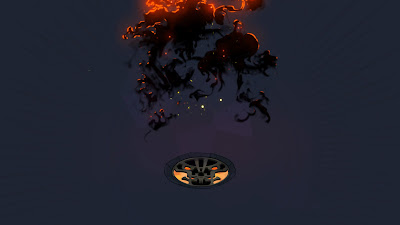 Difficulty. Closely linked to the above; I was playing the game on Normal and enjoying it a lot, and activating each Titan Star as it came online, but beyond a certain point I just stopped being able to do anything against my opponents, who can instantly pass and toss and move more quickly than I. I deactivated the stars, then dropped the difficulty to Normal. Again, this wasn't necessary - the game is designed to let you finish it if you don't win all the time - but I still selfishly resented not being great at the game. 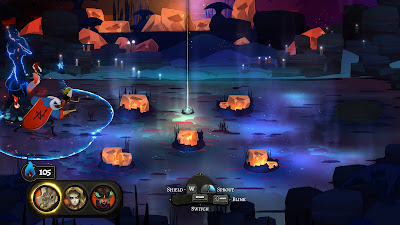 I did have a lot of fun playing this, but I doubt I'll return; it does sound like there's a lot of replay potential with the different team configurations and choices you can make, and some really major choices at the end, but the actual matches ended up feeling more like chores to me so I'll likely pass. That said, Pyre does reinforce my impression of the many, many things Supergiant does well, and I'm looking forward to playing Hades and whatever other games they have in the future. To their credit, they dramatically change each game: completely new styles, new mechanics, new stories. It's inevitable that I'd end up enjoying some more than others. Transistor remains the first in my heart, but I'm sure there are many people who will find Pyre the superior of the two games.
Posted by Christopher Charles Horatio Xavier King III, Esq. at 8:44 PM