After a very long wait, I've finally returned to The Culture novels by Iain Banks. A work colleague has long been encouraging me to read Use Of Weapons, and it also appeared on a list of recommendations from China Mieville, prompting me to return to this science fiction world. I had thought that this was the first book in the series, but now that I'm writing this post I'm realizing that it's actually the third, whoops. Fortunately The Culture is more about a universe with more-or-less independent stories, so reading out of order isn't a major problem. 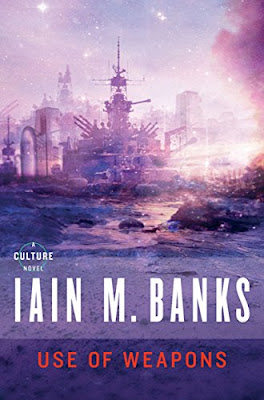 It's been so long since I read Look To Windward that I've forgotten almost all the details of that plot, but I do remember The Culture itself. It's a vast and powerful amalgamation of various humanoid and alien species, including governmental and quasi-military organizations. It is basically run by a large group of powerful artificial intelligences, which are usually loaded onto large starships, which in turn are maintained by organic citizens. The scope of the Culture spans the entire universe, which is far too vast and complex for any biological brain to track, and so they have built these machines to run things. The machines were originally built by people, and the values of the Culture are ostensibly more or less benevolent: they prize peace, prosperity, diversity, nature. But there's definitely a disconnect between the AIs and the people: the attitude of the machines tends to be indulgent, and maybe just a little patronizing, while remaining helpful. It's an odd relationship; I don't know if it's exactly symbiotic, since I suspect that by this point the AIs would be capable of just doing everything themselves; but most of what they're interested in are the messy and irrational situations caused by organic life not yet absorbed into The Culture, and so people remain a useful part of the society.

This book felt oddly difficult to read for the first half or so. Two of the main characters are special agents who change their identity from one mission to the next, which means changing their names, which makes it hard to keep people straight; it took me a while to realize that various characters were actually the same person, and which person in one scene was which person in another scene.

This is compounded by the disordered chronology, which jumps around in time from chapter to chapter. There is what I think of as the "main" storyline, which does proceed linearly, but I think that the other chapters are told in a random order, and even after finishing the book I'm not totally clear on the exact sequence of everything that has happened to Zakalwe. While reading the book I thought that the structure seemed strongly inspired by Catch-22, but to less good of a purpose: where the chaos of Catch-22 led to an eventual dramatic reveal that showed the origins of Yossarian's mental illness, the timeline of Use Of Weapons appeared to be needlessly complex for no good reason.

But, in the end, it does turn out to have a purpose, and a genuinely surprising one at that. Various threads from throughout the book, most notably Zakalwe's aversion to chairs, are finally explained, and everything that has happened before is now recast in a different light. Even my gripes with the confusing character names seem to be justified by the central assumed identity and deliberate confusion around names.

I do kind of wish that we had seem more of Sma in this book; she was such a fun character, and since her scenes were front-loaded I was kind of expecting her to be the protagonist. Her interactions with Skaffen-Amtiskaw were especially funny. And actually, despite the grimly macabre secret buried in the center of the novel, it also has some of the funnier bits I've recently read in science fiction. I think my favorite low-key joke is that one of the strongest intergalactic star cruisers is named the Just Testing, which made me giggle every time it is mentioned.

This was a fun and oddly surprising book. It felt like a slight slog for a stretch, but once everything came together it was nicely satisfying. I don't feel hugely compelled to immediate consume the remaining Culture novels, but am looking forward to picking off some more in the future.
Posted by Christopher Charles Horatio Xavier King III, Esq. at 7:39 PM