I like games, but it's somewhat rare for me to feel much anticipation for a particular game. I usually try to block out pre-release hype as much as I can, both to cut down on spoilers and to avoid disappointment from underwhelming deliveries. For the rare games that I get hyped on (your Dragon Age, your Failbetter), I'll grab it at launch and start playing almost immediately. So I don't often have a long-simmering unfulfilled urge to play something.

That exception is: Untitled Goose Game! This charming, tiny game from an indie studio burst onto my radar after it launched last year. I avoided any gameplay videos or detailed reviews, but the squeals of glee filling my social media feed made me uncharacteristically excited to try my own hand (wing?) at being a terrible goose. 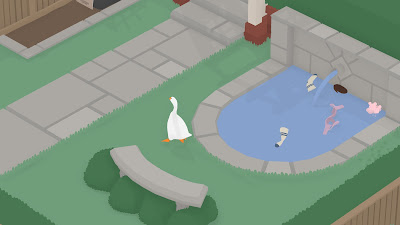 But: An obstacle! While UGG has been released on multiple platforms, on PC it launched as an Epic Games Store exclusive. For no particular reason other than my inherent orneriness, I've resisted buying any exclusive games on non-Steam platform. I actually have had the Epic Games Store installed for several months now, but just to claim the weekly free games on it, which I then swiftly never download nor play.

As is so often the case for scenarios where I want something but cannot justify purchasing it for myself, my salvation came at Christmastime, when my brother (no, my other brother) bought me the game. Conscience free, I commenced honking. 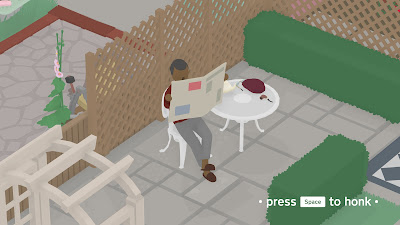 But: An obstacle! The Epic Games Store is also a launcher, like Steam; but unlike Steam, it doesn't really offer any in-game features or overlay. Most critically, it does not include a screenshot key. And UGG itself does not have an in-game screenshot key. How was I ever going to write a blog post about something if I couldn't take any screenshots of it?! 0/10 game store, would not recommend.

I'd last tangled with this issue while playing Star Wars: The Old Republic, another non-Steam game  lacking screenshot capabilities. In that case I ended up jury-rigging a ridiculous flow where I would launch from Steam into Origin, then from Origin into SWTOR, then use the Steam overlay for screenshots. The alternative I wanted to use was the NVIDIA GeForce Experience, which includes a variety of useful utilities including, yes, a screenshot button. But: An obstacle! For several years now, NVIDIA has bafflingly insisted on creating an account with them before downloading or using their software. It isn't enough to pay hundreds of dollars for their hardware, they want to track our usage data and provide marketing information and store everything in a database that will inevitably get hacked and leaked. I've grimly held the line on creating this dumb account, which means no GeForce Experience, which means no screenshots, which means unhappy Chris.

Yet again, though, I found an excuse to overcome my orneriness and do the thing I wanted to all along. As of January 1st of this year, California's Consumer Privacy Act (CCPA) has gone into effect. This gives California residents (including me!) a wide array of rights over how their personal data is collected, stored and used, somewhat analogous to what EU citizens currently enjoy with their GDPR.

On to the game! 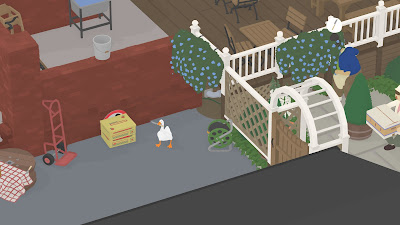 I ran into a game-breaking bug at almost the very start. There's a tutorial-ish section where you learn how to do various goosey things: run around, honk, flap your wings, grab things with your beak. You then move into the first main area, a garden, and encounter the main dynamic of the game: a mischievous sort of "to-do" list that states your goals. This included various tasks like "Enter the Garden", "Steal the Gardener's Keys", "Make the Gardener Hit His Thumb," etc. And... I couldn't do any of them. I could see the garden, locked up tight. I ran around, looking for other entrances; tried to pile up objects into a ramp leading over the wall; honked my little lungs out. Nothing.

I was determined to get through the game without consulting any walkthroughs or FAQs, but after thirty minutes of fruitless endeavor I finally admitted defeat and went online. And found that there was supposed to be a gardener character, who was just entirely missing from my game. Further investigation pointed me to an FAQ on the developer's page advising to choose the "Reset" option to put things back in their right place. Which I did, and the gardener did show up, and the rest of the game was fine. But still, that was an unfortunate start to the game. I have to wonder how many people never even got to really play the game because they ran into that bug at the very start. 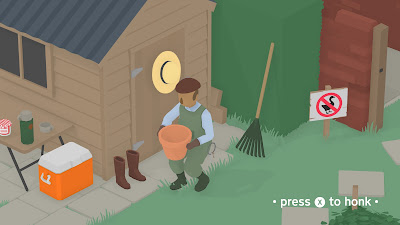 Once I could actually play the game, though, it was wonderful! It's one of the most purely fun things I've played recently, joyful and silly and clever. It's a simple game, but all of its elements pull together perfectly. The art style reminds me of my beloved Katamari Damacy, with slightly cartoony people, living in an environment of bold and pastel colors. The "dialogue" is also reminiscent of Katamari Damacy, with characters delivering lines like "?", "!" and "..."; their desires are shown in thought balloons, a la The Sims. The music is subtle and perfect: little piano figures that play to highlight pratfalls and confusion, making you feel like the star of a vaudeville play. 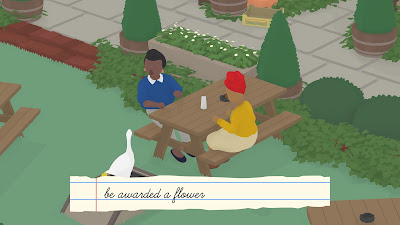 I swapped around the controls partway through the game, initially playing with mouse-and-keyboard and finishing with an xbox controller. Both are perfectly fine. The controller felt slightly better for most tasks, while I think the KBM makes it a little easier for the rare cases where you need to nudge a large round object with your beak. (I don't think the game supports rumble vibration, or at least I don't recall ever feeling that type of feedback.) 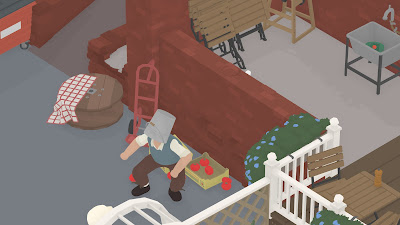 The heart of the game is its puzzles, those "To-Dos" of causing chaos. These are extremely clever and well-done. I highly recommend avoiding any walkthroughs and puzzling through them on your own, partly because it's more fun and satisfying to figure them out, but also because the actual game short already, and if you blow through the puzzles it may feel unsatisfyingly brief.

Each individual puzzle is well-crafted. Even though each goal is just a few words long ("Rake in the Lake"), it is also clear. Often the goal will be opposed by a human being who will attempt to thwart you, grabbing things away from you or chasing you off. There are usually several different ways to accomplish a goal: you might create a distraction in another area to lure away the person, or use stealthy movement to avoid being noticed, or rely on speed to outpace them and narrow openings to thwart their movement. 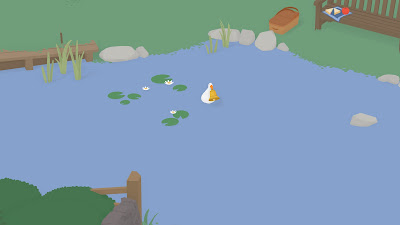 The high-level design is excellent, too. The whole game is one big map, but it's divided into a series of contiguous zones. A given zone may have, say, eight tasks. These tasks will gradually make its inhabitants more and more frustrated. Once you have accomplished seven tasks, they will start taking  anti-goose measures. This will then unlock a ninth task. Completing that ninth task will unblock the egress and allow access to the following zone. What's brilliant about this is that you don't need to 100% each area, so if there's one particular puzzle that's too confusing or that you don't have the dexterity for, it won't block your overall progress through the game. It also means that at any given time you probably have at least two challenges to work on, so if one thing you're trying to do gets too frustrating you can give it a rest and work on something else. 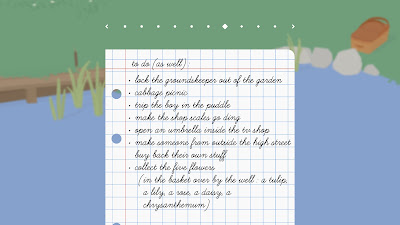 There's... not a whole lot more to write about, honestly, even in spoilerville. This game was really charming and fun, swiftly wiping away the various minor annoyances that preceded it. It was gone quickly, but provided tons of joy during its duration, and it's something I'll think of fondly for a long time to come.
Posted by Christopher Charles Horatio Xavier King III, Esq. at 9:01 PM