One of the less significant casualties of the coronavirus, but one I've been thinking about lately, is my attention span. I feel like it was weakening before and has finally been destroyed; it can be hard to even sit through an entire thirty-minute TV show episode, let alone watch a movie or read a book. My novel-reading in particular has dried up to almost nothing. I used to mostly read novels, but looking back through my post history, it's been five whole months since the last fiction book I finished, and the one before that was back in 2019. 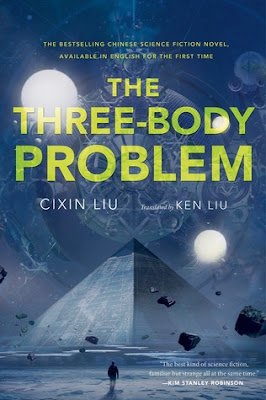 So, it was even more exciting than normal to finally pick up a book and be completely swept away by it. I've had The Three-Body Problem on my to-read list for years and years. After the local library system re-opened for (outdoor and socially-distanced) lending, I set a hold for it and eventually picked it up. Once I did start reading it, I was hooked! I had a hard time putting it down and would keep reading late into the night. I can't remember the last time a book has grabbed me that strongly.

All I knew about the book going in was that it was a Chinese science-fiction novel. It is that, ultimately, but also feels hard to categorize. It opens with a really compelling and intense historical fiction setting, morphs into a mystery novel, becomes a political thriller, and even feels like an urban fantasy for a stretch of time. But a foundational love of and fascination with science underlies it all, and by the end it's really clear that it's a science fiction book, but one different from any other one I can recall.

The story begins during the Cultural Revolution in China, which I was somewhat familiar with, but mostly in a dry, academic way. It feels very visceral here, and it was a little surprising to see a Chinese author portraying the terror and madness of the time. It reminded me slightly of the Holy Mountain chapter in David Mitchell's Ghostwritten, but with a broader perspective.

I really loved the modern-day sections, with Wang on the periphery of various movements and plots, sensing the action afoot but lacking a complete picture of what was going on. I was especially struck by the game, Three Body itself. This reminded me of the video game in Ender's Game: its origin and purpose is very different, but I'm really fascinated by both, particularly how the game shapes the player as the player shapes the game, and out-of-the-box thinking is necessary to advance.

I enjoyed the book from the start, but really got hooked once Wang started experiencing seemingly supernatural phenomena. Up until this point the novel had felt very grounded, so it was especially surprising and unnerving to see what was happening to him and his increasingly frantic and worried reactions. This part was starting to seem kind of Murakami-esque to me, as some strange and unseen world was starting to manifest in familiar surroundings.

The big difference is, that strange and unseen world is eventually shown and described. I was reminded of that famous Arthur C. Clarke phrase about sufficiently advanced technology being indistinguishable from magic. What's cool about The Three-Body Problem is that this is not merely used to hand-wave away some superpower, or trotted out as a pithy saying, but is actually demonstrated: it takes some time, but he eventually breaks down exactly what physical properties caused those phenomena to manifest, how they worked and why they were deployed.

I was a little startled by just how explicitly and thoroughly everything is explained at the end. To make another David Mitchell reference, it reminded me of the last act of The Bone Clocks, where everything that previously was mysterious is now revealed: not just facts, but systems, rules, and processes. We learn not only that the Trisolarians exist, but how they think, how their society has functioned.

Unlike Mitchell, though, Liu is writing science fiction. I don't know enough science to be able to evaluate his system, but it certainly all sounds plausible. He's already led us through real-world discoveries and real-world theories, with SETI and protons and strong nuclear forces and quantum entanglement and such. He introduces us to the discoveries that might be awaiting us in the future: higher-dimensional objects (with some interesting ethical implications!), shifting dimensionality, massless objects, and so on.

Stylistically, it felt a little odd to get such a solid block of exposition at the end of the story; but it isn't bad, just different. And there are so many differences before it too, with the shifts in perspective and time and genre, that it doesn't feel that out of place in the big picture. I tend to think of the desire to tie up all loose ends and make everything perfectly clear at the end as a distinctive characteristic of American (or Anglophone) art, in contrast to more ambiguous and open-ended stories from other cultures like Japan and Latin America. But I guess I don't have much exposure to Chinese fiction, and of course there are different people making different types of things in all cultures, so I shouldn't be surprised.

That actually ties in with an explicit point that Liu makes in his afterword, which is really fascinating. He eloquently suggests that, while historically mankind has been cruel to other people on Earth and hopeful about alien life, it should really be the opposite: we should be kind to one another and cautious about what lies outside our planet. It was cool that he ends on a note on the importance of loving one another; if it wasn't for that afterword, I think I would have walked away from the book with the impression of Liu as a misanthrope, pointing towards the cruelty of the Cultural Revolution and the disdain the ETO has towards humanity. But on further reflection it's really the opposite. He's pointing out problems that need to be fixed, not embracing their nihilism but exposing it.

Likewise, within the body of the book I thought that science in general and environmentalism in particular come off rather poorly; the ETO leaders talk about how they use environmentalism to destroy faith in human progress and depress the species from further advancement. But again, the afterword suggests that Liu's own feelings lie elsewhere, as he carefully describes (without specifically criticizing) the rise in pollution and loss of trees in his own lifetime during China's aggressive industrialization. As I interpret it, there is a dangerous instability from environmental criticism; but that should be solved by addressing the root cause and caring for our planet.

At least, that's what I think! I enjoyed this book immensely, but I think I should also write about it with humility. It isn't from my culture and it's probably doing things that I'm not aware of or can't fully appreciate. But I do love it and have enjoyed letting it fill my thoughts during the last week or so.

Since finishing it I've learned that there are actually two more books in the series, and needless to say I'm very interested in checking them out! I'm already curious whether they will continue with the diverse settings, eras, tones and styles of the first book; or if they will lock into the plot that this one kicked off and focus on how the story continues. Either way, I'm eager to see what comes next!
Posted by Christopher Charles Horatio Xavier King III, Esq. at 3:41 PM