As long-time readers of the blog may have guessed by now, I’ve been working on a new Shadowrun campaign! Nothing makes my blog posts dry up quite like spending every free waking hour hunched over a keyboard, dreaming of technology and magic running unfettered in a world much like our own.

So (drum roll) allow me to introduce the latest offering from Antumbra Enterprises, The Caldecott Caper! 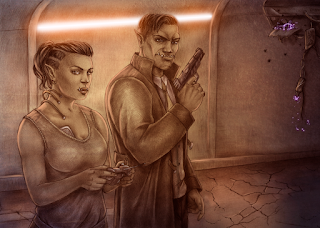 I wanted to capture some of this experience for posterity, but also want to avoid the mega-posts that marked my previous efforts, so this time around I’ll try and be a bit more disciplined, writing more posts that try to stay focused on particular topics. My tentative game plan is:

I’ll avoid rehashing any of the points made in my previous posts. For the most part my process remained the same as before… the overall pipeline feels efficient to me, and I’ve gotten better at it over time.

One major difference this time around was the timeline. A few of the ideas for The Caldecott Caper have been floating around since Corona (the third and final part of Antumbra Saga), but I didn’t start actively thinking through the plot for this campaign until Harebrained Schemes’ Kickstarter campaign in January. My tentative plan was to launch TCC shortly before the mini-campaign was released. The mini-campaign was initially scheduled for late 2015; working backwards, I figured that I should try and wrap up my own campaign before Thanksgiving.

I knew that there would be significant changes to the engine, especially for the new Matrix. Much of my pain in modding Shadowrun has been dealing with newer versions of the engine, which inevitably break things, so I decided to restructure my workflow to get as much “safe” work done as possible before Hong Kong came out, so I could focus on scripting and other high-risk tasks on the final engine.

In practice, this meant writing a ton of dialogue and building maps. For dialogue, I was going a bit out on a limb: I’ve been increasingly drawn towards reactive narratives, where the conversation can vary based on the prior actions of the player (rather than a straightforward “Prompt A always results in Response B” structure). This was a bit cumbersome to do in earlier versions of the Shadowrun engine, for technical reasons that are hard to describe here. I reasoned that the team at HBS would have had the same frustrations as me and would have come up with a solution as part of their new engine overhaul, and so I wrote my dialogue (in Google Docs as before) with tentative confidence that I could support reactivity without too much extra scaffolding. (I was delighted and relieved to find my trust rewarded with a simple change/fix that exactly matched my desired behavior.)

I was a little more leery about working on maps, just because I knew I would be missing out on most of the great new Hong Kong props. Still, I knew from experience that map-making is one of my greatest weaknesses, and so I wanted to get out in front of that work as much as possible. Among other things, this meant that I ended up polishing my maps at a much earlier stage than normal. Typically this would be one of the last things I do to my campaign before publishing: placing lights, special effects, decorations, etc. This time, I got that level of atmosphere down very early on. That ended up working out pretty well; I don’t know if I would necessarily do it in that order again, but it did give me more momentum once I was ready to start actually creating the meat of the game.

The testing was also a bit different than before, and, more broadly, I felt a bit more pressure. Antumbra was released in an environment where there were already a dozen other well-reviewed campaigns. By the time of Corona, I had a few dedicated fans, which was wonderful, but still did not feel like the spotlight was all that bright. By now, though, Antumbra Saga is the #2 most popular campaign for Dragonfall, with tens of thousands of subscribers, and I’m increasingly aware that any new campaign will get a lot of attention. Because of that, I wanted to focus a bit more on testing and polishing before releasing the game to the wild; on the flip side, I’ve learned a TON from supporting my campaigns over the last two years, and so have gotten much better at creating content to avoid problems in the first place.

Okay! This is starting to get a bit rambling, which is a good cue for me to cut off this post. Up next, I’ll share my experiences with writing dialogue!
Posted by Christopher Charles Horatio Xavier King III, Esq. at 8:03 PM No comments: