As I mentioned/threatened recently, there are two new-ish Thomas Piketty books out. A Brief History of Equality had more demand and I needed to wait a while to get my hands on it from the library, but it was worth the wait. 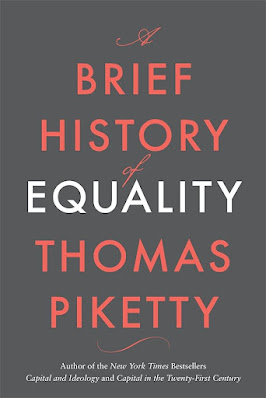 In his introduction, Piketty explicitly positions this book as a response to the widespread demand for shorter and more digestible versions of his massive tomes: there's a lot of interest in his analysis of wealth inequality, often from people without a ton of time to read. In my opinion, Capital in the Twenty-first Century and Capital & Ideology are extremely readable; but their mere sizes at over a thousands pages each are definitely daunting. Piketty wanted to give a bit of a primer to his work, covering not only those two but also his earlier "Top Incomes in France in the Twentieth Century", which I have not read.

Of course, this isn't just a heavily abridged reprint, but a new work that weaves in a lot of his arguments from elsewhere. As he notes, his own outlook on some topics has shifted over the last two decades, so he's taking this opportunity to make a more cohesive and up-to-date explanation of how he sees the state of the world.

Overall I enjoyed this book, but honestly it doesn't feel essential for people who have already read his other books. There were just a handful of things that really jumped out to me as new-ish ideas, such as a consideration (which he describes but does not necessarily advocate for) of replacing ownership with "universal wages". Very often he'll spend a few sentences or paragraphs on a topic he might have spent several pages or a chapter on in another book, such as Sweden's transition from a hyper-capitalist censitary suffrage system to an egalitarian social democracy, or how America's investment in education in the 19th century lead to our economic dominance in the 20th. I'm genuinely curious how these things would be received by someone who hasn't read his earlier books: hopefully they're still digestible and meaningful, even with less time spent on each topic.

It isn't exactly new, but I was really struck by Piketty's history-focused look at the rise of Western Capitalism and how Europe's interminable and expensive wars in the middle of the second millennium paved the way for their domination over the rest of the world in the nineteenth century. In addition to racism and exploitation, Piketty has a strong focus on colonialism, which I personally tend not to think about much but is probably particularly resonant for French people like Piketty, given the shameful history of Haiti and the recent conflicts in Algeria and Vietnam. Anyways, I think this jumped out at me because the time period Piketty focuses on is exactly the same as the time period of Europa Universalis IV, which has been my other major obsession of the past few months: starting with a fragmented, weak and warring Europe that stands in contrast to wealthy Ming and powerful Ottomans, and (most likely but depending on the player's actions) ending with empires centered in Europe spanning the globe.

Based on the introduction, I was vaguely expecting the book to be roughly 1/3 "TIiF", 1/3 "Cit21C", and 1/3 "C&I". Instead, I think it's maybe 90% C&I, 7% Cit21C and 3% TIiF. Which isn't necessarily a problem; C&I is his most recent work, most expansive and ambitious, with the broadest application and seems most exciting to him personally, so it makes sense that's where his focus would be. I was mildly disappointed that he spent so little time connecting Cit21C with C&I. When reading the latter work, I was struck by how his newly optimistic outlook completely ignored what seem to me to be the grim fundamental observation of the earlier book: r > g. I was hoping that this book would reconcile those, but it continues to ignore it, making the simpler argument that returning to mid-20th-century tax policies will result in mid-20th-century results in wealth and income equality.

That said, I do really dig Piketty's enthusiastic embrace of intersectionality. He doesn't point to social and climate justice as a reason to reform our economic system: he loudly points out that we're destroying our planet and destroying ourselves with racism, sexism and greed, and offers some tools that he thinks could help us build a more just, fair and sustainable world.

This book was translated by Steven Rendall, not Arthur Goldhammer like Piketty's doorstop books have been, and I'm mildly curious about how the translations may have differed. I absolutely loved the earlier repetition of "I will return to this point" as a sort of comforting signpost while Piketty led the way through an argument. Here those words don't appear, but we do see phrases like "We will return at length", and I'm left wondering whether it's another translation of the same phrase or some new idiom Piketty used in the original French.

Overall Piketty's voice sounds the same: clear, thoughtful, informed. There isn't a whole lot of humor in here, but occasionally something fun slips into a footnote. One unusual hint of snark comes late in the book, when he says something along the lines of "Billionaires love to spend enormous amounts of money on far-fetched schemes involving space travel or geo-engineering rather than the more mundane solutions of paying taxes and living modestly."

The question in the back of my mind while reading this book was, "Would I recommend this to someone else for their first Piketty?". My final answer is a solid "Probably". It's definitely less daunting than his much longer books, and it covers the most interesting and exciting aspects of his scholarship. There isn't a whole lot here for people who've already read his other books, and if someone is already deeply invested in economics or social class then they'd probably do better heading straight to "the big books"; but for the majority of people who don't want to carry thousands of pages with them on public transit or an airplane, this is a really good introduction to what Piketty has to offer.