You'd think that I'd take a break between major RPGs. Nope! The corpse of Cyberpunk isn't yet cold in its grave, and I've already moved on to Pathfinder: Wrath of the Righteous, the sequel to one of my favorite RPGs of the last decade. 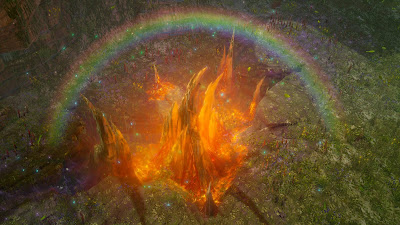 Playing it now is a bit risky. Wrath's launch has been far smoother than Cyberpunk's, but that isn't saying much, and RPGs as a whole are rather infamous for having a lot of bugs when they ship. These inevitably get patched, so usually you're better off waiting a couple of months or longer. So why start now? Well, I rarely have a clear queue that coincides with the launch of a game I'm excited about, so I wanted to take advantage of it. Also, it looks like there might be a mod scene for this game, and I'd like to finish it before trying out any potential upcoming mods.

Overall it's been a pretty smooth experience for me so far, at ~50 (update: 100+!) hours in or so. I think I've had to reload once or twice due to a bug, and had a few combat glitches (actions getting canceled, enemies falling infinitely down into pits), but nothing enraging yet. 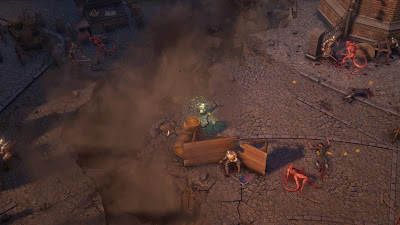 Wrath builds on Kingmaker in almost every way: more game modes, more classes, more features. I'm having a blast with my PC: Beonea, a halfling cavalier who belongs to the Order of the Paw. She's basically a three-foot-tall knight in shining armor who rides around on the back of a dog, charging at enemies and trampling them underfoot (er, underpaw). It's pretty awesome. 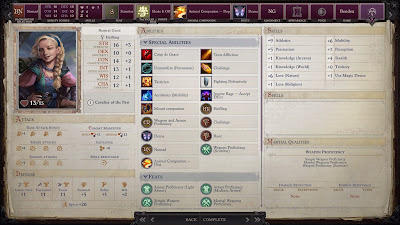 Some random technical and strategy thoughts before getting into story stuff:

Like Kingmaker, time is a factor in this game, but not to quite as big an extent. BUT, the one time that time is important is early in the game after the prologue, where you have a few days before a particular event happens, and you might get locked out of recruiting certain party members or unlocking certain paths if you take too long. The single most important thing to know here is that you should uncheck the "Rest for recommended time" option on the sleeping interface, which will likely have you sleep for 3 days instead of 9 hours. Particularly at this part of the game, it's much better to rest the 9 hours you need to clear fatigue and relearn spells, then you can touch up any extra healing with more spells or cheap scrolls of Cure Light Wounds. 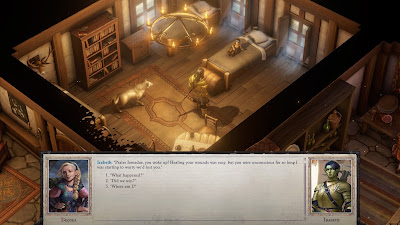 A few times so far the game has caught me off-guard when I thought I was returning to a place of safety and rest, only to get yanked into a long and difficult non-skippable struggle. On the one hand, this is surprising and exciting and adds to the overall atmosphere of danger and dread. On the other hand, it can feel pretty frustrating! I'll be all excited to respec a character and rest up and memorize scrolls, then have to put that all on hold for several hours while I desperately chug potions to avoid permadeath. 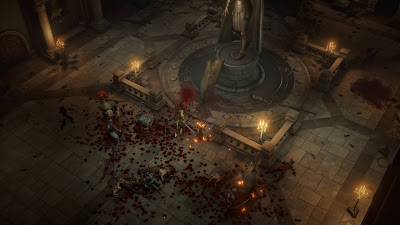 The economy seems pretty well balanced in the game, with interesting stuff to buy and limited funds, along with a big optional money sink for the Campaign mode. You get a lot of money by selling enchanted weapons and armor, so don't be like me and stockpile all of those. I'm now near the end of Act 2, and just for reference, these are the weapons that recruitable companions focus on:

Anything else that you don't want your PC to use you can safely sell. 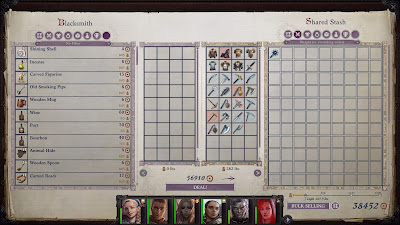 You'll have plenty of money to buy more than that, so fill in anything that's useful for your PC or for a companion you're expecting to travel with a lot. 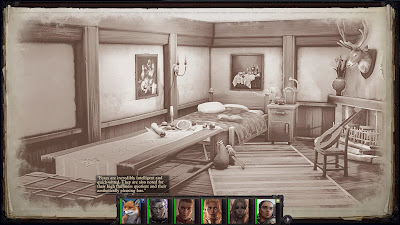 I've been mostly following the auto-leveling suggestions from the game for my companions, which is fine but not great. I might do a big party-wide respec at some point to align everything. For example, three companions focus on Trickery; that's kind of good, since you always want someone to pick locks and disable traps, but since only one is necessary, if you always travel with one you could have the other two focus on other things. Lots of companions will by default advance in Arcane Lore, but only one uses Nature Lore, and she's usually busy doing other things at camp.

In Act 2, once you start leading your crusade, you'll need to keep up victories to keep your morale banners green. Fortunately, the "days green" stack, so, for example, winning two battles back-to-back has the same effect as winning one battle, waiting four days, then winning a second battle. So don't hesitate to press forward if you're feeling confident about winning. 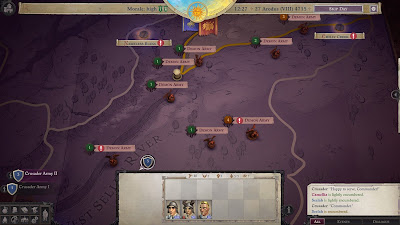 Like Kingmaker, there's no catch-up mechanic, and your crusade can spiral down if you start making mistakes. In particular, if you win a battle but take heavy losses, you should probably reload and not fight that battle until you're stronger. Otherwise every future battle will be harder since your army will be smaller, and you'll take bigger losses the smaller your army is. 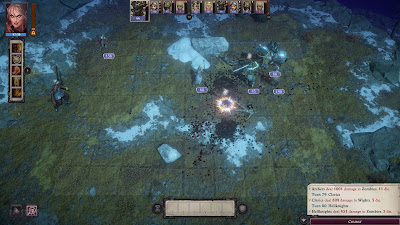 I'm not 100% sure yet, but I think that from a min-max perspective you want to drag out the Crusade part of Act 2 as long as possible while keeping your banner green. You earn more Finance Points every day, and can recruit more armies, so you'll enter Act 3 in the best shape with a huge army you took weeks assembling than with a small army you rushed in one week. 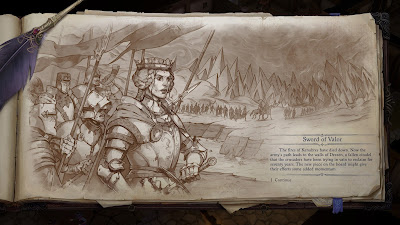 Okay, strategy aside, here's what my campaign's looking like so far!

Again, I'm Beodea, a halfling cavalier. Like with Kingmaker, Wrath has really impressive and very unique portraits with a ton of character, so once you see a picture you like you're already halfway to designing your character. I was torn between a few, but I've never played as a halfling before so this seemed fun. Beodea's feats have focused on improving her mounted combat capabilities and also just straight-up fighting. She's currently pretty tanky, wielding a scimitar with a shield, and medium armor that makes full use of her high DEX. In retrospect she would probably have been better off wielding a two-handed weapon since her mount almost always takes hits instead of her, so I might respec her at some point. But, I've also read that Reach weapons don't work well with mounted combat: since you're in range to strike before your mount is, they might not get close enough to use their natural attacks. Anyways, it's been fine, and may get better. 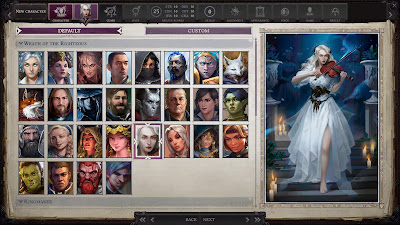 One fun thing about mounted combat is that you are always considered "adjacent to" your mount. So, Teamwork feats will always proc: therefore, it's good to get your mount up to INT 3 so they become eligible to take those. Also, you will always be "flanking" any enemy you charge. I dipped into two levels of Thug to get Sneak Attack and Evasion; in retrospect, I probably should have just gone with a straight Rogue dip, since I took CHA as a dump stat and thus don't have much use for Intimidate. 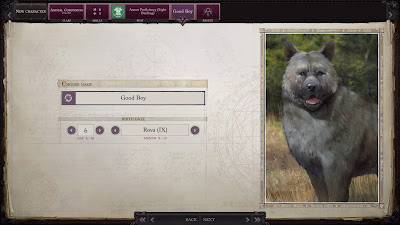 Beodea is currently Neutral Good and worships Desna, who is Chaotic Good. I haven't committed to a Mythic path yet, but I think I'm eligible for Angel and Azata. I turned down the Aeon path, have consistently rejected Demon opportunities, and skipped the Trickster path. 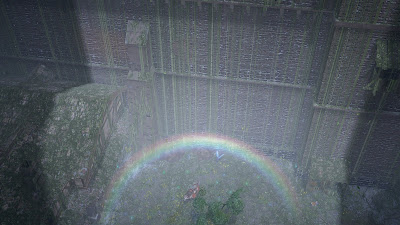 I swap out my party semi-regularly based on companion quests. I almost always take Lann, who is an insane damage-dealer. I'm used to high-DPS characters being melee fighters, so it's interesting having all that power with a bow. I usually take Camellia for Trickery checks (locks and traps); she's also a really great buffer before fights. Her high DEX makes her decent at tanking during fights, but she rarely lands hits. For magic stuff, lately I've been taking Nenio since she has such a huge range of available spells and also really high Lore skills; but sometimes I'll take Ember instead, who has fewer options but some really solid and repeatable capabilities. I like having Seelah around; she doesn't stand out in any particular way, but is all-around useful (a better hitter than Camellia, a few buffs of her own, decent tanking.) Daeran and Sosiel are great for undead-heavy encounters, but otherwise not super useful, their damage is lacking and I can usually get enough buffs from my other party members. Woljiff can sub in for Camila on trickery things, but I prefer Camellia. And Rejill is pretty great, he rivals Lann for straight damage and can take a lot of hits. 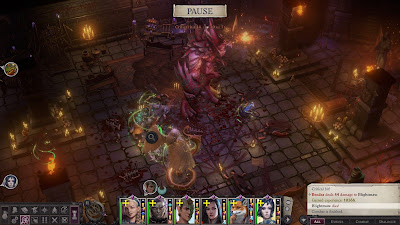 So far I've been following the default/recommended leveling suggestions for most of my companions, but a few are diverging as I get higher and build a better concept of how my team coheres as a unit. I just recently respecced Beodea again: I'd originally made her a Nomad focusing on Scimitars with shields; but since her mount takes all the hits, I've recently remade her to focus on Greataxes and the Power Attack line of feats.

Since I started writing this post, I've plunged deep into Act 3 and am having even more of a blast. I guess another sign of a good game is that I'd rather be playing the game than writing about it! 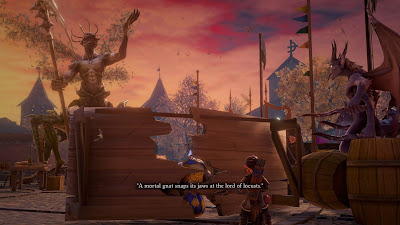 One final thought: for a while now, I've bemoaned how cookie-cutter fantasy RPG video game stories are. Seemingly everything is a variation on "An Ancient Evil Seeks To Conquer The World And Only You Can Stop It." I deeply crave lower-stakes stories, something more personal and human and relatable. Well, Wrath of the Righteous is not that low-stakes game! It's absurdly over-the-top, high-power, epic and sweeping from the jump. Weirdly, it kind of reminds me of the Saints Row sequels, where your PC starts off as the most important person in the world and just gets more ludicrously powerful from there. That said, I'm unironically loving it. It's grappling with some of the topics that got raised in Throne of Bhaal, but spending an entire game on it and not just an epilogue.