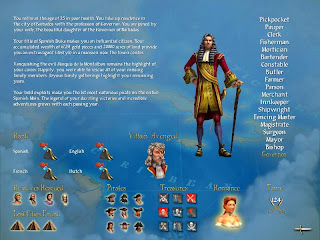 I picked up Pirates! again, after detouring a few years in Civilization. On my first game I tore through it like I never had before, both completing the main quest and doing all the promotions and treasure hunts. I'm guessing that Governor is the highest rank you can get in the game; I think I'm just two points shy of the maximum score, both from the Wealth category.

(As a side note: I can't help but feel slightly disturbed by the insinuations of incest in the first paragraph of text. I think they should have inserted a clarifying story, such as "You married the daughter of the Governor of Barbados, then led a peasant revolt against your father-in-law and deposed him, triumphantly seizing his post and ushering in a benevolent reign of enlightened despotism." Or something like that.)

Pirates! has been one of my all-time favorite games. I have incredibly fond memories of the old floppy disk version. One of my favorite games back then was the time I decided to play a whole game as a "good guy" - I was allied with Spain, and spent my time hunting down renegade pirates. It was harder than the standard buccaneer path, but those challenges made it more interesting. I had just captured some pirate (in that version, you would actually capture pirates or pirate hunters, and then could turn them in to the authorities or ransom their release), and sailed into Caracas or some place on the Spanish Main to claim my reward. When I approached the town, I got the nice little menu, along with two messages. "The Golden Fleet is in town! The Silver Train is in town!"

I remember just sitting and staring at the screen for several minutes. The Golden Fleet and the Silver Train were two distinct treasures that moved along the Spanish Main. Combined, they represented an entire year's worth of resources plundered from the New World by Spain. The Golden Fleet was carried by ships while the Silver Train travelled overland. Seeing either one of them was the chance of a lifetime and a successful capture could guarantee a comfortable retirement. Capturing both would be the defining capstone to any pirate's career. The only problem was, I wasn't a pirate.

That was one of the great moral challenges of my childhood: would I betray a career of hard honest work in exchange for a shot at wicked riches? As it turned out, the answer was yes. I felt bad doing it, but the temptation was just too great. What I really wanted was the fame, and the accolades for being an honest pirate-hunter could not compare to seizing a treasure greater than any pirate in history.

Through luck, I narrowly managed to capture the town and the treasure. In the original Pirates!, land combat was far different than it is in the current version. It was conducted in real-time, with you guiding two parties of pirates through terrain as you attempted to reach the garrison for a final sword battle. In this case, I invaded the city from the sea, another mode which is no longer offered. I had to avoid volley after volley of cannon fire from the fort as I sailed towards the city, whereon I would fight the captain of the guard. In those days I sailed on a sloop, which meant that I was highly maneuverable, but could carry only a minimal crew and was vulnerable to a single broadside.

I sailed all the way through without taking a single shot, then started the fight. I don't remember the exact numbers, but they would have been something like 60 to 500. I knew from experience that I would have to end the battle quickly, so I chose a cutlass and flailed away. Combat also worked differently in that version, as it was primarily based on morale and injury rather than position... more violent and less reminiscent of Errol Flynn. Losses were severe, but I managed to put him away before I was left standing alone. And, just like that, I was sitting on the largest pile of treasure in the Caribbean. I did a quick stop by the tavern to replenish my losses, gave the Spanish governor a raspberry, and then sailed on my way.

Nothing in my most recent game was quite that memorable, but it was still an awful lot of fun. I think one of the big keys was picking a skill in sailing instead of my normal choice of fencing (in the original Pirates!, I would also sometimes choose medicine). In the first game, pretty much everything you did came down to a swordfight, so it made a lot of sense to pick it. That's less true in the latest version, and I found that skill at sailing was a huge help whenever I was doing quests, which often required me to sail west to Vera Cruz (easy), and then make my way back to San Juan (incredibly difficult). Sailing eases the pain for one of the most difficult parts of the game, sailing into the wind... it's still annoyingly slow, but becomes manageable.

One unique thing about this game was my vessel. About a year into my career, I discovered a new warship, a Ship of the Line. These frigate-class vessels are EXTREMELY rare; I've only seen one or two of them before. I captured it, and kept it as my flagship. It is truly a monster of a vessel, able to carry 48 cannons, 450 passengers, and can take incredible amounts of damage with almost no ill effect. Not only that, but it moves much faster than the sloop when sailing at a broad reach. This was my first game in any version of Pirates! where I used a large vessel for most of the game, and I was quite impressed. I also love the idea of a pirate bearing down on his enemies in a Royal Navy vessel.

In other gaming news: I've beaten all the main songs on Guitar Hero 2. I need to decide whether to kick into Hard mode or not. In Guitar Hero 1 I got close to beating all the songs on Hard, but by the time I started playing the sequel my skills had atrophied and I stuck with Normal.

I've installed Icewind Dale, but haven't gotten any further yet than creating my party. I'm already unsure about how it will compare to Baldur's Gate, since my favorite thing about that series was the personality of the NPCs in my party. I do like the idea of creating my own party from scratch, but at the same time, I'm worried that I'll be losing out on the fun storylines. Ah, well. We'll see what happens.

I'm still planning on holding off until Spore is released to upgrade my PC, at which point I will also pick up Oblivion. Speaking of Spore, does anyone know when that's finally coming out? I just went to their web site, and the most recent "News" is from August. If you check out the Wikipedia article, they're tossing around dates from April 2007 through April 2008. Wow...
Posted by Christopher Charles Horatio Xavier King III, Esq. at 11:16 AM