See, this is why I'm an engineer and not a sales person: I wrote a whole freaking post about Wheeler, and didn't think to include any screenshots.  I doubt anyone is waiting on these, but for posterity's sake, here is what Wheeler looks like as of December 2008.

If you think any of this looks good, I need to give credit to the Android UI team.  They made some great-looking UI components, and despite my regular complaints about things not working, the truth is that they're some of the best SDK-provided components out there; only the iPhone's even compare.  With all the other toolsets out there, every serious developer needs to write their own UI toolkit from scratch or use a third-party offering.  Android's UI should actually give developers pause as they consider whether it's worth using.

And for anything that doesn't look good, well, that's probably my fault.  The pre-release transitions from M3 to M5 and so on wreaked havoc on everyone who tried to customize their appearance, so I played it safe and stuck to the defaults on almost everything.  This had the benefits of greatly easing transitions to newer SDK versions, simplifying my workload, and creating a clean look that unified with the rest of the phone.  The disadvantage is that "unified with the rest of the phone" is synonymous with "undistinguished."

Anyways!  Onward!  When someone starts Wheeler for the first time, one of the first things they'll probably try is to start riding.  Wheeler will activate GPS and center the map on your position.  As you ride, the map automatically moves to show where you are.  An old-fashioned high-wheeler indicates what direction you are moving in.  The stopwatch shows how long you've been riding for, and behind the scenes Wheeler is parsing through the GPS data to determine how far you've been riding, how fast, and so on. 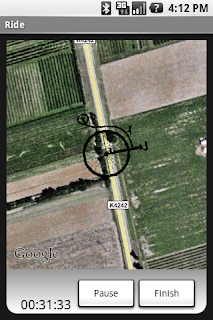 Wheeler can track all of the rides you have gone on.  It can do this automatically through the mapping mode, or you can fill it out yourself after each ride. 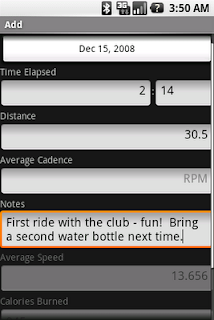 Because Wheeler focuses on customization, you can adjust the settings to only display the statistics you care about.  A commuter might not care very much about how many feet they have been climbing, but that information is really useful to a mountain biker. 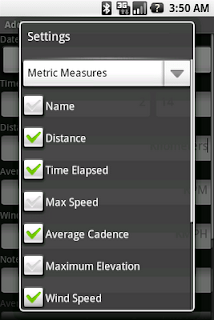 Once you have entered enough data in to Wheeler, it can start doing some more advanced analysis for you.  Select the statistic you're interested in and a time period to view how your performance has been changing (hopefully for the better!). 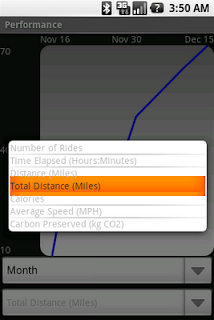 Right now you can track the major stats you entered yourself, and also some derived ones.  The ones I personally find most interesting are calories burned and carbon preservation.  I think I'll try and add another one for savings on gas money in the next major version.  The problem with all of these is that there's a tension between accuracy and simplicity.  There are a lot of factors that influence exactly how many calories a particular person will burn on a particular ride, and it would be a big pain for the user to need to type a whole bunch of information in and keep it up-to-date.  I'm still trying to decide how to resolve this dilemma. 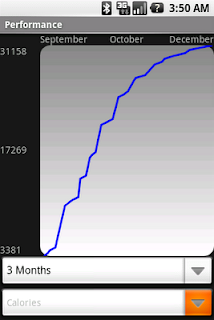 I felt super-super nervous when I uploaded Wheeler to the Market.  Even though I've been distributing personal applications and games for over fifteen years, they usually just go to friends, or are buried in obscure locations.  By contrast, I was throwing something up front-and-center, in a position where, potentially, thousands of strangers could see what I'd done.

So, what's the story?  I had no idea what to expect when I clicked "Publish".  I sort of vaguely thought that there might be a dozen or so people who would eventually use it.  I mean, how many bicycling G1 users are out there?  I checked it again the next day and saw that it had been downloaded a total of 0 times.  Aww, that's too bad, I thought.  At the same time, I was a little relieved.  If nobody sees it, nobody can criticize!

Well, less than a week after it went live, Wheeler has been downloaded a total of 1320 times!  I think that's amazing, and honestly humbling.  In just a few days, Wheeler has reached an order of magnitude more people than all of my prior individual work to date.  (And about four orders of magnitude less than the work I've been paid to do, but I'm more than content with that.)  It feels pretty exciting, pretty weird, pretty amazing.  Even though it's a free application, I suddenly feel a sense of responsibility towards it based on the number of lives it's touching, even in a marginal way.

According to Google, of those 1320 people, 1042 people have liked it enough to keep on their phones.  59 people care enough about the application to have rated or left a comment about it.  Those ratings average to 4 of 5 stars.

Is that good or bad?  I don't know - I can't see the ratings for any other applications.  What are the commenters saying?  I don't know - there is no way for me to view them.  This is one of the frustrating things about the Market... it would be so nice to actually learn what the users like and dislike, how people are using Wheeler, etc.  I must say that I totally get what Google is doing: they want developers to buy G1 phones so that they can access the Market on it and actually read the comments.  (To be fair, I highly doubt that Google is getting a big premium on this - $400 seems like a lot of money, but for a non-subsidized phone that's pretty reasonable, and below some top-end Nokia phones.)  I'd imagine, though, that even developers who have G1s would be irritated by this... it would be great to read the comments at your desktop browser.

Or maybe not.  From what I've read on the support forums, there is a pretty ugly streak running wild in the Market now.  Some of it is run-of-the-mill Internet anarchic stupidity, with dozens of people saying "first!!!!" and leaving one-star reviews, but there have been widespreaad complaints about racist attacks, crude sexuality, and heated personal insults.  Um, yeah... that doesn't sound like fun to me.  Google claims to be working on solving the problem, and I hope that they do.  I know that the comments I read on iTunes when looking for apps for my iPhone have been extremely helpful - both the ratings to know what's good, and the comments to learn about what people are using it for and whether anything is broken.  I wouldn't even bother reading them if I had to wade through trash to do so, and I hope the Android market doesn't get sucked into the morass that has kept me away from forums for years.

What has been cool, though, is actually hearing directly from my users.  Google permits users to email the developer of any application through the Market, and I've additionally put a support email address within Wheeler itself.  So far I've just heard from a handful of people, but that has probably been the most amazing part of all: finding out about problems people are having, what sorts of features they hope to see in the future, where they live and what kind of riding they do.  It makes everything feel real and immediate.

So, whither Wheeler?  I don't know how much time I'll be able to devote to it, but at a minimum I hope to keep it current with Android and fix any major bugs people find.  So far there haven't been any (knock on wood), though I did release an update that helps explain the GPS feature better, based on invaluable feedback.  (From real people!  Wow!  I still can't get over this!)  If and when I get a G1 (my iPhone contract is up around September 2009), I'll hopefully start actually riding with Wheeler and get additional motivation to improve it.  In between now and then, it'll probably depend on how many long weekends I have, what kind of requests I hear, and how tricky it is to make improvements.