A while back (a long while back!) I'd read and deeply enjoyed House of the Stag. It's the only book I'd read by Kage Baker, so I determined to check out more of her work. Some light research revealed that she has written a series generally referred to as The Company, so I (eventually!) picked up the first entry, In the Garden of Iden.

Unlike House of the Stag, which was a really creatively constructed fantasy novel, In the Garden of Iden is an unusual science fiction novel. It's more focused and traditional than HotS, and has a surprisingly strong romantic component. While it wasn't what I expected, I really enjoyed it... the book does a great job at setting up its universe and tells a very compelling story that is both very personal and historical.

The book gets off to a great start with the absolutely brazen way that it sets up its premise. This is a sci-fi novel, and it relies on two futuristic inventions, time-travel and immortality. Instead of doing the in-vogue thing of having the reader inhabit the world for a while and gradually glean the way the underlying system works, here the narrator directly lays everything out before the story even starts. You can travel to the past, and then back to your present, but not into the future. Immortality is possible, but only children can be made immortal; they will grow into adults and stay youthful forever.

The best part, though, is that you can change the past, but only in minor ways. More specifically, you can't do anything that changes recorded history. So, for example, you can't stop the Library of Alexandria from burning; but you could sneak into the library, photocopy all of the scrolls, hide them in an out-of-the-way cave, then dig them back up in the year 2500. Of course, it makes no dang sense that the determining factor in whether an event can be changed is whether it was recorded or not; except that we're reading a sci-fi novel, and so of course they can't change events that we, the readers, already learned in history class.

This neatly sets up both the premise and the sensibility of the novel. It reads like historical fiction, with lots of period details, except that the protagonists are from a sci-fi novel, with advanced technology and perfect knowledge about what's going to happen.

The narrator and main character, Mendoza, is recruited for immortality from her poor upbringing in 1500s Spain. She's a good character, and also a canny choice for the first novel in this series: because she's a young, new field operative, there's a good in-universe explanation for why other characters can explain basic things to her, like relationships between mortals and immortals or the proper protocol for dealing with potential disasters. 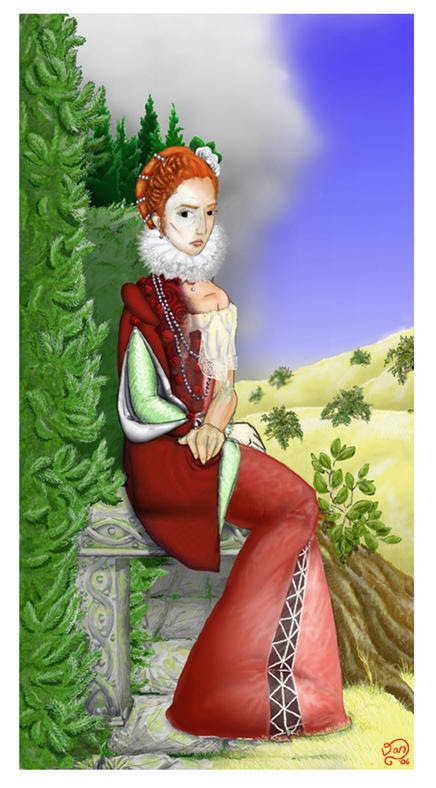 The Company itself is a fun invention; I really enjoyed the blasé attitude that all the experienced field operatives have. They're actors, putting on a show for "the monkeys," for whom they feel some mixture of disgust and pity. Joseph in particular is fascinating, with his self-consciously histrionic outbursts and core of utterly competent rationality. Even though all of the employees go through the same conditioning process, they're unique individuals, and end up with room to carve out their separate identities and quirks. Nonetheless, they've all been brainwashed and programmed by The Company (and are aware of this). There's a sad nonchalance to the way that Mendoza states, near the end of the novel, that she has no free will. It's hard to believe that after sharing her thoughts for the entire book, but she's declaring the reality of the world she lives in.

Once I understood the nature of The Company, I was expecting this book to read something like To Say Nothing of the Dog, another great time-traveling book by Connie Willis. Instead of hopping around between various dramatic points of interest, though, this book settles down and spends most of its time in the titular Garden of Iden, a backwater English country manor. Several plots are swirling around: The Company is trying to extract valuable botanical data while remaining undetected; Queen Mary is ushering in an attempted counter-reformation that is causing distress in much of England but is vaguely welcomed by the nominally Catholic residents of Iden; and Mendoza falls in love with a stern Protestant bookkeeper named Nicholas. The plot lines swiftly entangle, with tension mounting as heretics are burned and Nicholas grows suspicious of the guests.

I was a bit surprised by how much of the book was devoted to exploring Nicholas's character and his relationship with Mendoza, but this ends up being the heart of the novel. It felt a bit like Pride and Prejudice or Jane Eyre at times, with Mendoza the bright and resourceful young woman and Nicholas the outwardly dour young man. But here, they form a union much sooner, and the book is more devoted to exploring the aftermath of their relationship. Mendoza is living a lie, and Nicholas has a sense of the deception, but their attraction is strong enough that they feel compelled to continue despite the risks.

I'm still a bit unclear about exactly what was going on at the beginning of the book. After the introduction, I'd assumed that the rich lady and her followers who purchased Mendoza were Company agents. Their later capture and interrogation seems to contradict that. Still, I'm left wondering if that might have just been the first stage in Mendoza's recruitment: they were maneuvering her into a situation where she would be sufficiently psychologically desperate for the next stage of her conditioning. If that's not the case, then just what were they? Witches? A religious minority? We never get a clear answer; presumably Joseph knows the whole story, but he never hints to Mendoza that it was anything other than what it seemed.

This is probably just me making stuff up, but part of me wonders if Sir Walter might later become Walter Raleigh. Pretty much just because of the similar name, but the dates are intriguing as well: Walter Raleigh's birthdate is disputed, and Sir Walter has aged into a younger body, and apparently will remain youthful for some time. His vigor and ambition seem well-suited to becoming an explorer and adventurer. Alternately, I could imagine the young child from the Christmas feast growing into this man; Mendoza seems to pay particular attention to him, although nothing important about his future is revealed in the novel.

This was a really fun read, and I'm curious to see where the story goes from here; this episode is definitely neatly wrapped up at the end, but there's almost endless potential with the scenario Kage Baker has created. I could see us continuing to follow Mendoza's career throughout linear time, or jumping around to see different operatives at different eras, or even a bigger-picture view that shows the actual people behind The Company. It's always nice to have something new to look forward to.
Posted by Christopher Charles Horatio Xavier King III, Esq. at 8:53 PM