I lucked out and managed to snag Gone Home during a brief window when it was available for free download. This was very generous of the developer, who offered it "for people who need something about hope and love right now". That definitely applied to me last weekend, and I was grateful for the chance to immerse myself into something new and positive. 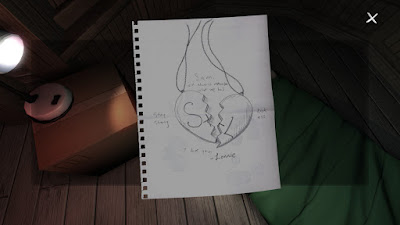 Gone Home has been dimly on my radar for several years now. It has a reputation as one of the archetypal indie games: using games as an innovative storytelling device, with a unique perspective, a clear thematic goal, and non-traditional gameplay. That last point can trip up so-called "hardcore gamers," who are often left asking, "Is this even a game?" Without enemies to defeat, or resources to acquire, or other traditional markers of progress, this wave of indie games seems to step back from the ordinary signifiers that reward players for their effort. In my opinion, though, that ultimately magnifies their impact: you aren't trying to bump up artificial numbers, and instead can focus on the pure narrative in front of you. 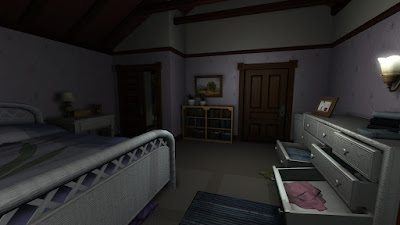 In many ways, Gone Home looks like a fully-polished modern game. In contrast to the retro/pixel-art style loved by many other indie developers, this game is done in gorgeous 3D, with a lovingly detailed interactive house for you to explore. Ambient lighting, sound effects, and such contribute to the fantastic atmosphere. Again, there's no HUD to distract you, no inventory screens to manage. When you pick up an object, you simply hold it in your hands. Most objects are pointless, but it still feels weirdly good to be able to interact with your environment in this way. You can inspect loose ballpoint pens, flip around magazines, check out the logo on the back of a dinner plate. Occasionally, an object will reveal additional uses, such as a cassette tape that can be loaded into a nearby player.

I got a SERIOUS nostalgia rush while playing this game. It's set in 1995, and its environment overlapped in many ways with my own childhood and teenage home. I was often struck by things that I hadn't thought of in years - at one point, you find a table that folds out into a sewing machine. In an instant, I was transported back to the sewing room in my basement, where I played with that exact same model. That machine is long gone, and I might never have thought about it again for the rest of my life if it wasn't for this moment in a game. 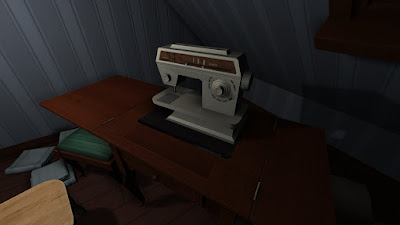 There are a lot of very specific ways in which the game diverges from my own experiences, most obviously in the family itself. This family just has two sisters, with you playing as the older and the story primarily interested in the younger. I think the developers are drawing on real-life elements for these stories, but those details are less familiar to me - girl punk bands, beauty magazines. And that's good! The shared experiences help it feel authentic and immediate, while the unique experiences help me share in thoughts and feelings that I personally haven't held before.

The game doesn't have clear rules for progression or goals, but as you explore, you gradually figure it out. There are a handful of very simple mechanical obstacles (I don't want to say "puzzles") to overcome. You might find a key that opens a locked door to a new wing of the house, or a fragment of the combination for a padlock. While the overall feeling of the game is incredibly free and lets you wander anywhere at any time, these few guards help establish narrative coherency and dramatic progress. Deeper secrets are only revealed after you have discovered the clearer ones. 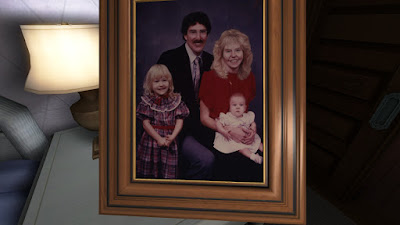 Early on, I thought that the game would be about learning what has happened to your family. In this pre-Internet era, you've flown back from Europe on short notice, to find a seemingly-empty house waiting for you. Going through old letters and messages and press releases and such helps reveal what's been happening in your parents' lives. Your mother has been rising in the ranks at the National Park Service, and there are some hints that she may have become romantically entangled with a younger ranger. Your father is a failed novelist, shamed by his own father for writing conspiracy thrillers, and is skating by with tedious equipment reviews for an audiophile magazine. Each has a happy ending, though. Your mom seems to have ended things gracefully with Rick, who is getting married, and your father has received recent encouragement and inspiration that has rejuvenated his creative writing. For a while I'd worried that they'd both left the house due to unhappiness, but it turns out that they're off on a week-long retreat for couple's counseling and therapy. They've recognized the problems they face, and are working to rekindle their marriage.

While those are interesting stories, though, it eventually becomes clear that the real heart of the story is learning about your sister. You learn about your parents through written fragments, but you can actually hear Samantha's voice, narrating the diary that she left behind. There's also a ton of artwork, and some really engaging short fiction that she wrote. This was probably the most impressive part of the game: just how fully-fledged of a character they were able to create, one who never appears and you can never interact with, but who still feels incredibly vibrant and alive. 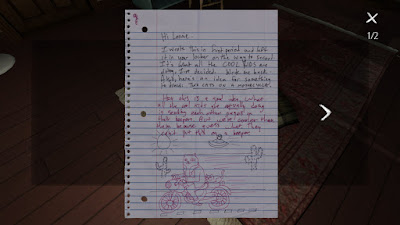 I had a sense early on of where her story was headed, and loved what they did with it. Samantha gradually falls in love with a schoolmate named Lonnie, over a progression of really tender and sweet realizations. They are kindred spirits, complementary and compatible. There's a ton to like about their relationship, but one high point was their collaboration, as Lonnie illustrates Sam's writings, or they work together on a girl-power zine. 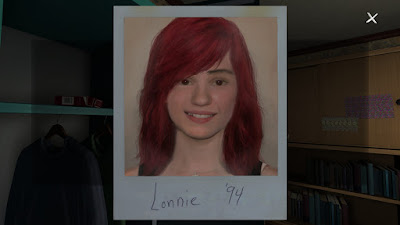 I had a weird feeling of indirect guilt while playing as Katie reading Sam's notes. In-game, Katie has been gone from home for several years, and so hasn't been around to support her sister, or even know about what she's going through. That resonated with me. I haven't been in that exact situation, but as an eldest child, I've felt bad about not being physically or emotionally present for my younger siblings when they've gone through difficult events. That's actually lessened somewhat in recent years - we're all better at keeping in touch and communicating now, thanks to the Internet and maturity - but putting myself in Katie's shoes reminded me of my disconnection during high-school and college years, when I could have made a bigger and more positive impact. 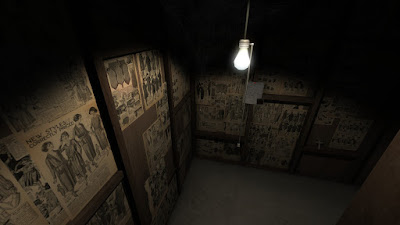 I was also relieved at where the story ended up - there are some dark suggestions throughout the game that Sam might have come to a bad end, as well as ongoing hints about curses in the house. If the developers had wanted to, they could very easily have made a terrifying horror game here! There are a couple of moments, when a light goes out or a door creaks shut or you read an ominous warning, that your heart rate might jump up as you worry that things are taking a frightening turn. But it's ultimately the same sort of suspended dread that most of us have felt when we're all alone in a large and unfamiliar space. We jump, startled, but eventually realize that it's okay, we're safe, and everything will be fine.

I loved this game. After the heavy narrative rush of Life Is Strange, this felt much more relaxing while still relevant and important. I feel like it opens yet another door when it comes to storytelling in games. I'm not sure if other developers will follow in these footsteps, or if it will remain as a bit of an oddity, but I'm really glad that it exists.