Part thirteen in a weekly(☣️) devlog.

I finally finished that monster 30-page mission, hurrah! Not only was this probably the longest mission of the campaign (in terms of text, and, depending on your playstyle, possibly clock time as well), but it also marked the half-way point of missions. That doesn't mean I'm halfway done with the game - I haven't even started scripting the hub yet, where about half of the dialogs take place - but it's still a really nice milestone to cross.

I'm currently working on the mission after that, the last one before the next critical-path story mission. This one is a bit more conventional, with a little dialogue, some puzzles, and a fair amount of mandatory combat. But I try to do something unique in every mission, so this one has a few wrinkles, especially in the combat. Another unique thing about this mission is it gives you the chance to craft a unique weapon of your choice. I'd like to chat a bit about the design and implementation of this feature.

My Words Are Poison


My favorite thing about RPGs is the intersection of choice, morality, and gameplay. I think a game is designed well if you choose a mechanically inferior outcome because it leads to a morally superior outcome. Shadowrun tends not to have clear-cut good and evil characters, but absolutely has a wide variety of factions and values to which a player may align themself. A simple example here is supporting Samuel's ork resource center in Dragonfall: there isn't a gameplay advantage to giving him nuyen, and you'd be better off hoarding the cash, but a lot of players gladly become benefactors.

In my current mission, you can come into the possession of a deadly venom. There's an immediate plot-required use of this venom to manufacture an antidote. But you can acquire more than is needed, and then can choose how to use the surplus. There are a variety of options for this. You can make even more of an antidote, which is a benign use and may support your team in the future. You can hoard it for a phat cash payout. Or, if you can locate the required schematics, you can craft one of several unique poison weapons.

This doesn't have huge repercussions, and I don't need to track much beyond the player's initial decision. But it may be a relatively significant decision for the player to make: how badly do I want this cool new toy? Am I willing to take risks to get it? What will my companions think of this decision, and do I care?


I mused over the weapon selection for a little while. I wanted some choice here, both to make things more interesting and to support different playstyles: if the only option was, say, a new throwing weapon, then it wouldn't be tempting for 90% of player builds. But I also didn't want to go overboard. It would be time-consuming to create 9 new unique weapons, and there's an ongoing cost to tune and support all of them.

I ended up with three main weapon selections: a bioweapon grenade launcher, a poisoned axe, and venomous hand razors (a cyberweapon). I'd initially considered doing poison rounds for firearms, but that would have required making different variation for each weapon type (pistol, rifle, etc.). I like the example of the grenade launcher: unlike most weapons, it only uses the Ranged Combat stat, and doesn't have a specialization like Rifle, so many more players can use it. The axe is useful for melee characters; I'd previously created a unique unarmed "weapon" in a previous mission so it felt like that slot was already filled. The hand razors fit into an existing gap between the entry-level and end-game cyberweapons, using poison damage instead of the customary bleeding type.

In terms of power level, these weapons are all "Tier 2", which is about the level that players will likely be using, so the weapons should be useful but won't be essential top-tier gear. They also have some unique mechanics, so even if a player already has Tier 2 gear they can be situationally useful. Heck, even after upgrading to Tier 3 they might keep them around if they have a spare slot. The axe and the launcher can be used by other crew members, so if you personally outgrow their usefulness, they could become hand-me-downs.

The hand razors can't be transferred and are only useful if your PC has the appropriate skill, so I gate its creation behind the Cyber Affinity skill. I also gave options to pick up Acid Bolt or Acid Stream, which are existing spells that can be useful to casters.


So: You can absolutely make complete Shadowrun campaigns using only the official editor. However, as my campaigns have become more ambitious and polished, I've started dabbling in creating unique things that can't be directly made within the editor: new gear, weapons, spells, crew advancement, etc. This requires manually editing text files, so it's a different skill set than standard mission creation.

I always start off by finding an existing file to copy and modify. You can locate these in the official content pack. In my case, I'll use the existing Grenade Launcher as my template, which is located in data/items/ex 1\ m203.item.txt.  Here it is! 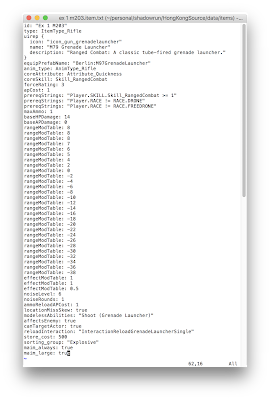 I rename this and place it into my own content pack, with the new name data/items/ex 1\ poison.item.txt. Here's the updated version: 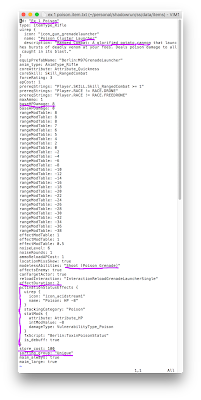 The modified properties have been marked up with violet lines. Here's a quick run-down of what I changed and why:


After it's been added, I exit and restart the Shadowrun editor. The item will now show up, just like all the built-in items do.

I've done this enough now that I pretty much always get it right on the first try, but when I first started making items I'd often screw stuff up. This will generally cause problems with the editor: often you'll see errors while the content pack loads, or sometimes you'll get errors when launching a scene that references it. You can always back this out by deleting the newly added items, or just keep modifying until it's working.

I use my existing combat test scene to test and experiment with the item. This one worked off the bat, since it uses pretty common and simple mechanics. Crew weapons tend to be a bit more complicated and require more trial and error to work properly. Anyways, here's a screenshot of the successful test: 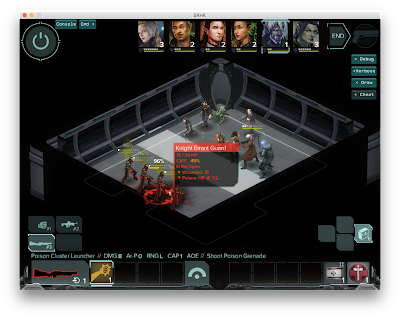 The correct item name and attack name show in the UI, an appropriate status message is shown on the enemy's hover window, and they're showing the green "poisoned" effect animation. Test passed!
Posted by Christopher Charles Horatio Xavier King III, Esq. at 7:13 PM