Always Dead in the Castle 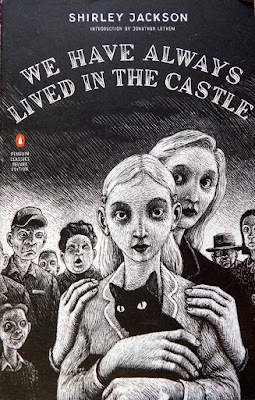 What a great book! It's a fast, propulsive read, with one of the most compelling narrators I've encountered recently. It isn't supernatural like The Haunting of Hill House, but achieves a somewhat similarly creepy vibe: more of a psychological thriller than a ghost story.

I knew this book was going to be good from page one. It starts with what has quickly become one of my all-time favorite opening paragraphs.

My name is Mary Katherine Blackwood. I am eighteen years old, and I live with my sister Constance. I have often thought that with any luck at all I could have been born a werewolf, because the two middle fingers on both my hands are the same length, but I have had to be content with what I had. I dislike washing myself, and dogs, and noise. I like my sister Constance, and Richard Plantagenet, and Amanita phalloides, the death-cup mushroom. Everyone else in my family is dead.


Isn't that great?! I love how the writing sort of slides downward as it continues. Reading this for the first time, the line about a werewolf made me stop short, re-parse, go back, and eventually go "Ohhhh... this is an interesting person we're hearing from!"

Merricat is fascinating. She isn't unreliable in the traditional sense, but she has a very well-defined psychological profile. Particularly in the early chapters, she's primarily distinguished by her misanthropic outlook, which is vast and deep.

Merricat sees herself and her family as the persecuted victims, but you can see a broader cycle of hate at work. The village treats Merricat awfully, taunting her and shunning her and physically blocking her. Given her hateful interior monologue, though, I imagine that Merricat is probably glaring and scowling at everyone she meets: even though she doesn't act out against them, her attitude likely eggs them on. You can easily imagine her as a straightforward villain in another story, even though we're inclined to view her sympathetically in her own.

The novel is filled with little rituals and tokens, mostly objects to which Merricat attaches some powerful significance. This starts out fairly commonplace, with a long meditation on a particular pattern of cracks outside a specific house, which Merricat has avoided stepping on ever since her childhood. That feels familiar, the kind of nonsensical but still diligently-observed behavior that young children exhibit. But she goes far beyond that: nailing books to trees in order to keep out unwanted visitors, burying silver dollars in the river to ensure her family's health, smashing glass or mirrors to damage hostile spirits.

That's, uh, not normal, especially for an adult of eighteen. Which raises the question for me: has Merricat always been like this? That's probably the best explanation, which also covers her behavior in The Incident, but I'm not sure if we have enough information within the novel to know for sure. I can imagine her maybe being only slightly peculiar as a child, and sliding further into it after the stresses of living in the orphanage and dealing with any mental backlash from her actions.

Along with the rituals, Merricat seems to have a set of rules that she is "not allowed" to do. At first I thought that this meant Constance forbade her from doing those things. That seemed a little odd, though, since Constance is habitually pleasant and indulgent. I now think that these are interior rules that Merricat creates herself, perhaps for self-preservation of her mental and physical safety, but then externalizes to an outside authority to keep herself from breaking them. Once she has decided that something is "not allowed," she will not be moved from the ban, even though she's the one who created it in the first place.

And what is Constance's deal? She doesn't seem "normal" either, although she is a lot easier to like than Merricat. She may have also had a slide, starting out fairly normal and retreating after the anxiety of the trial. It's really interesting to see how she and Merricat complement one another: given Constance's warmer personality, it would make more sense for her to be the public face of the Blackwoods; but because she bears the blame for what happened, Merricat carries out that awful role. They protect one another and care for each other deeply, which forms a sweet heart of the novel, but also... I dunno. Is it good and healthy for them to shut out the outside world? Maybe it is!

Visitors like Helen Clarke and Charles Blackwood do seem to make reasonable arguments: that it's time to move on, that the sisters need to re-engage with the world. Helen seems well-meaning but useless. Charles, of course, has a more sinister sheen, and it's interesting to unpack who he actually is from Merricat's perception. Obviously he isn't a devil or a ghost. What is his goal? My assumption is that he wanted to mooch from and/or defraud them, given his obsession with money and possessions. But he doesn't seem to be making a big play, and spends most of his time and attention on small items instead of the overall estate. It is curious that he gave up the pursuit so soon after the fire. I don't know if he was just scared off, or if he wasn't all that motivated to start with, or what.

Charles makes an effort early on at winning them over, but the way he talks to Jonas about Merricat quickly becomes menacing and weird. Seeing that made me wonder whether mental illness runs in the Blackwood family. He doesn't have the excuse of trauma (that we know of) to explain his behavior, but he shares similar tendencies of paranoia and hostility, to which he adds manipulation and greed.

Along the same lines of inherited illness, I'd initially assumed that Julian was disabled as a result of the poisoning, but I now wonder if it preceded the incident. It would explain why Julian and his wife were living with them, the conversations about helping out and not being a burden. He seems to acknowledge that the arsenic has damaged him, but it might have broken something that was already bent.

The book gets really exciting for a couple of pages when Julian raises the idea that Merricat is dead. That doesn't make any sense given her trip to the village, but it made me consider various other possibilities. Maybe Constance is dead. Maybe only one sister survived and re-invented the other. I'm just as happy that this ended up not being the case, though. It's nice to keep this intense story grounded without reaching for supernatural complications.

The freakout of the villagers near the end was awful and terrifying. The scene of a roiling destructive mob reminded me of the lynching scene in To Kill a Mockingbird, although in this case the voice of reason arrived far too late and wasn't as good a voice as Atticus Finch. Of course, in the real world, hate mobs do immense harm and are rarely stopped at all. I admired the sisters for simply enduring this horrific persecution, even while their world is shattering around them and their lives permanently changed.

As the story reaches its conclusion, you can see the legend being created, being propagated. In a generation this will become "the house where the two witches live" or whatever, and villagers will continue their own rituals of offering sacrifices, because that's what has been done. And for all that Merricat wanted everything to remain the same, the world actually evolves in a way that's tolerable to them, perhaps even more so than before: they're left alone, and are still provided for.

I was pleasantly surprised that the book ultimately ends on a fairly upbeat, though still weird, note. That would be a horrible situation for me to be in, but they're able to find the good in it and hold on to what's important: each other. Shirley Jackson isn't exactly renowned for happy endings, but despite everything, Merricat and Constance ARE happy. This might be a tragedy to the rest of the world, but not for them.

I, uh, liked this book! It's surprisingly affecting, especially with such an odd protagonist at the center. Much of the mystery comes from parsing out the narrator's inner thoughts, which dovetails nicely with the exploration of dark attitudes surrounding her. It gripped me all the way through, and I suspect I'll remember Merricat for some time to come.
Posted by Christopher Charles Horatio Xavier King III, Esq. at 11:35 AM