Due to the largesse of my brother (thanks, Andrew!), I have received three brand-spankin'-new games. In addition to being fun new things for me to play, these also push me above a milestone: I now own over 100 games on Steam. (A not-insignificant number of which hail from the same dedicated gift-giver.) 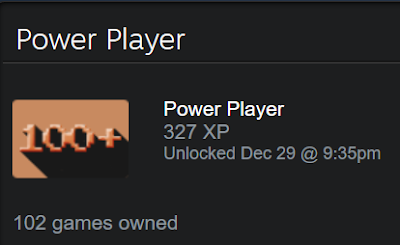 People who play a lot of games often bemoan the state of their queue: the number of unplayed games they have accumulated, potentially forming a source of dread rather than joy. Those of who grew up in an era when games invariably cost $50 apiece are predisposed to reckless acquisition when the notorious Steam Sales offer a panoply of desirable games for single-digit prices.

That said, in recent years I've attempted to tamp back on the habit somewhat: putting off buying new games until I've finished ones I want to play, periodically reviewing my queue of unplayed games, and, perhaps most crucially, avoiding my favorite genre, epic role-playing games that can demand hundreds of hours to complete. "In the time it would take me to complete Dragon Star XIV: The Endarkening, I could complete ten non-RPG games!" I whisper quietly to myself as a single tear rolls down my cheek.

Anyways: For no particular reason other than this snazzy new Steam badge, here is the current state of my Steam queue at the end of 2018, after 12 years on the platform.

Games I Have Completed

Games I Have Started And Expect To Complete

The Lord of the Rings Online

Games I Have Started And May Not Complete

Games I Have Not Started But Plan To

Games I Have Not Started And Do Not Plan To

*: Played the original release version, no plans to replay the expanded version.
**: Includes various DLC, which I think may contribute towards the 100 total? I have played most of the DLC for these games.
***: I finished a pre-Steam version of this, but have not played since purchasing here.
****: Why do I own this???

I'll try and clean up this list and maybe add a bunch more links later. Looking this over, a few random thoughts:

I may be overly optimistic on the games I intend to play. Then again, looking over that section, each individual item in it should be pretty reasonable.

This probably goes without saying, but there are a couple of games that I've completed which I enjoy less than games I haven't. I hate-played through much of Shadow of Mordor; on the other hand, I was very gripped by Divinity: Original Sin and Wasteland 2 before I got derailed in my playthroughs (by life in the former case, by a game-breaking bug in the latter). Likewise, I'm genuinely interested by several of the games I don't plan to start. It's just a brutally honest self-assessment of what I'm likely to accomplish.

Indie games seem overrepresented in the "started but will not finish" section. I generally enjoyed these games a lot, but when I reach a platforming puzzle or 2D fight that's overly difficult for me, I tend to put them aside, move on to other things, and never come back.

On the whole, I'm pretty happy with the breakdown. I've completed more games than not. And for all my earlier bellyaching about long RPGs, that genre is very well represented in the "finished" column.

Edit: I only have a couple of multiplayer games on here, which are hard to fit into these categories. Or would be, if I actually played them at all! I've moved LOTRO to the "Games I Have Started And Expect To Complete" category. I haven't posted about it lately, but I'm currently at Edoras, with a level in the high 70s, and am vaguely thinking I'll eventually make it to the endgame. In the action-multiplayer category, I have some hours logged in both Team Fortress 2 and Left 4 Dead 2, but upon further reflection this was probably just to get their trading cards, I don't remember actually playing any matches, so I've moved them to "Do Not Plan To Play".
Posted by Christopher Charles Horatio Xavier King III, Esq. at 10:23 PM