Yes, I'm still playing Sunless Skies. Yes, it's still a lot of fun! I'm not the only person to think so: I was surprised and delighted to read a glowing review in The Washington Post a few days ago. It's so funny to see this tiny, scrappy little London studio labo(u)r under the radar for so long and get very little notice for their indie games, and then they randomly get these huge endorsements from national publications like the New Yorker or the Post. Strange but wonderful! 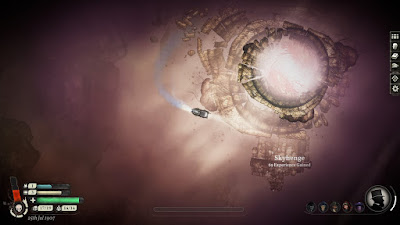 "Strange but wonderful" also comes close to summing up my impression of Sunless Skies; toss in "wistful" and "foreboding" and and you've just about got it. It's an evolution of the marvelous atmosphere of their earlier games: literally brighter than the nocturnal Fallen London and Sunless Sea, with plenty of remaining Victorian gothic atmosphere but also more moments of joy and peace. After all these years in Fallen London I still don't quite feel at home there, but I've swiftly grown attached to the ethereal domains of the High Wilderness, and find myself fantasizing about life there.

I feel like I've reached a nice plateau in my current game. My current loadout looks like the following: 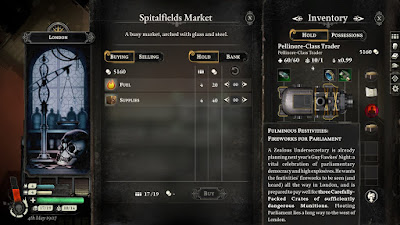 My acquisition order this time was Crew, then Mining, then Butchery/Hold, then Hull, and finally Guns. If I were to do it again, I think I would prioritize Hold first: Having even a few extra slots makes a huge difference. With your starter Hold, you only have space for a single Opportunity and your required supplies; having a couple more allows you to keep the free items you scavenge en route, and/or complete multiple Opportunities on a single circuit.

After that, I might have prioritized at least one weapon. I need to revisit a statement made in my first post: after playing some more, I'm now viewing combat as an essential element of the game, not something to be blindly avoided. There are many reasons for this! The biggest one is probably that, unlike in Sunless Sea, every enemy in Sunless Skies is faster than you. Sea had the benefit of Full Power, a potentially-risky burst of speed that would swiftly take you out of harm's way. Skies doesn't have a comparable boost, and enemies will easily catch up to you, so in many (not all) cases you end up taking more damage while running away than you would facing them.

Fortunately, combat in Skies is pretty fun, and once you have an enemy's movements down, you should be able to complete most encounters without taking damage. For the simple enemies at the start of the game, it's simplest to line up so you're each facing each other, then fire your weapon. When they fire at or charge you, wait until they're close and then press Q or E to side-step the collision. Back away if necessary, turn around to face them again, and repeat. More advanced enemies later on will try to circle you, which makes it a bit more challenging as you need to lead your target, firing where you expect them to be. After several deaths (and every death I've had in this game has come from combat), I swallowed my pride and turned down the combat difficulty, which definitely helps as well. 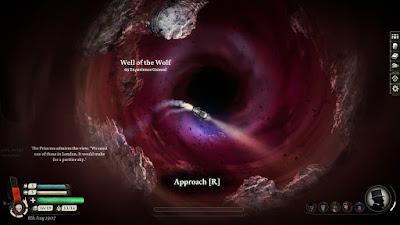 Using the environment is a huge help as well. While you can't easily outrun enemies, placing an obstacle between you and them almost always suffices, as most enemies can't easily navigate around rocks. Even better: you may be able to pull a mutually hostile foe into the fight, letting the other two duke it out while you observe or flee. I've also found the rear-attack mine to be a game-changer. I'd initially imagined using it in the narrow corridors of the Reach to block pursuers forced to follow the straight channels. That works, but it does so much more! The mine can intercept and detonate your foe's projectiles, thus acting as a kind of mobile shield. It often staggers enemies when they hit, saving you from belligerent cantankeri or star-crazed captains. And they stick around a lot longer than forward bullets do: if I see an enemy coming from behind but still a ways off, I'll gradually drop off a series of mines as I proceed, raising the chances they'll damage themselves in their approach.

The actual rewards from combat are comparable to those in Sea, and arguably better. You receive a very small amount of experience for defeating each enemy. Once you fly over their wreckage and interact with it, you start a small storylet to choose your reward. These vary immensely: they may grant sovereigns, additional experience, possessions (like Salon-Stewed Gossip or a Savage Secret), crew, hull, supplies, pretty much anything, but always worth having. 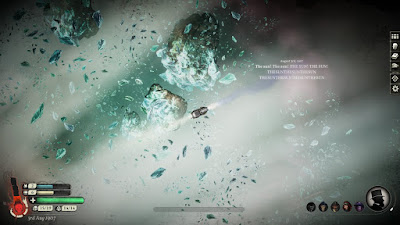 So, why not just fight everyone? I'm still calibrating my personal meter for when to fight and when to flee. Combat can be time-consuming, and you're burning fuel and supplies the whole time you're engaged. Defeating the enemy doesn't matter much if you're left adrift and starving to death. The cumulative damage from multiple battles can eventually wear down your ship. And, ultimately, the time you're spending shooting at baddies is time you're not making serious money on trade or advancing the dozens of intriguing storylines. It's still worth doing - in particular, it's a great source of Savage Secrets and other resources that can otherwise be difficult to acquire - but probably not worth prioritizing over other work. 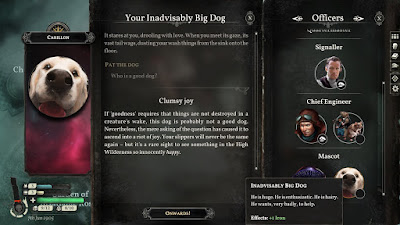 Anyways, I should write a little about my current game:

I think I'm on my fifth captain now, Sir Lloyd, an Auditor with the Ministry of Public Decency. This is my first character to make it to Albion. I'd basically wrapped up all of the unique storylines in the Reach. A few random things I remember: 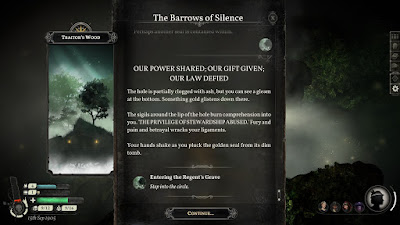 I still have a few pending quests in there, notably the Circus folk, the headmaster dude from Magdalene's, and whatever the hell is going on in Carillon. As I travel in Albion, more of my crew's stories are pointing me back to the Reach, so I'll likely head there in a few days to follow those up and take the opportunity to finish (or at least advance) those plots. 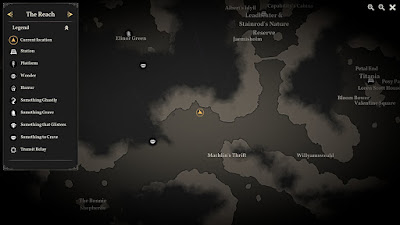 But in the meantime: Wow, Albion is beautiful! I'm in serious awe of the glorious mechanized industry on display. It's fun, too. So far I've led a similar uprising on Brabazon (a possible homage to New Crobuzon?), although it has ended (?) in a rather surprising evolution of the status quo. There's a recurring theme on the Albion ports of cities with both visible and hidden sides, making me think a little of The City And The City, and it's interesting to see those same mechanics (diminishing resource, limited time) being applied to different thematic ends. 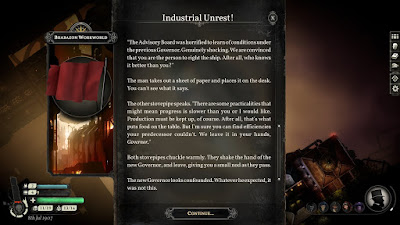 So far I don't really have a handle on the political situation in Albion. I mean, story-wise I'm mentally dividing it into owners and labo(u)r, but mechanically the Empress seems to have total control. It seems like there's a plot afoot with the reticent bookkeeper in London, so after I've done some more work for them perhaps I'll find whether there's a more organized opposition in the works. 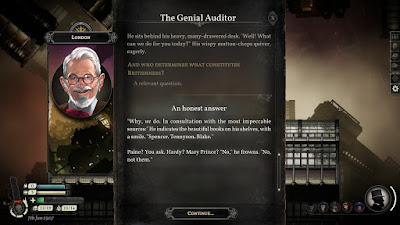 All of my captains thus far have been pursuing a Wealth ambition, as I did for my early Sunless Sea games. Lloyd has now purchased a handsome London property, and I'm about to start decorating it in a manner befitting my station. I'm curious to see how much further this ambition has to go. It's pretty perfect as a starter, giving me a strong sense of purpose while also having a lot of freedom and flexibility in pursuing it.

Okay, that's entirely too much writing about Sunless Skies. It's time to do much more important things, like play Sunless Skies. I'll see you in the High Wilderness!
Posted by Christopher Charles Horatio Xavier King III, Esq. at 6:11 PM