Another year, another massive RPG! Thanks to the annual generosity of my brother, I have yet another meaty game to sink my teeth into. I've started playing Pathfinder: Kingmaker and am really enjoying it so far. I'm only a short way into the game, having recently reached Level 3, but I can tell that this will be a massive journey, so I figured it's worth a short post up front to cover my initial impressions. 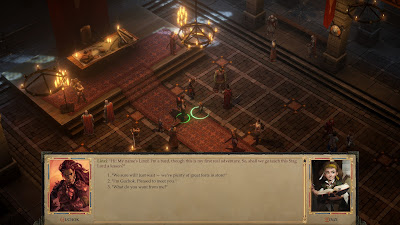 First, as is clear from the title, this game uses the Pathfinder system and is set in the Pathfinder universe. I was slightly leery about this: as I've whined about before, I've spent much of my life bouncing between various fantasy worlds, re-learning their magic systems, their political systems, their terminology and mythology. I've never played the pen-and-paper Pathfinder and was dreading learning all this stuff all over again. But, as I quickly and happily came to learn, it is extremely similar to the D&D systems that I already know, particularly the Neverwinter Nights incarnation. This makes perfect sense; as I had previously heard, Pathfinder spun off from the "open-sourced" 3.5 edition of D&D, but for some reason I had assumed that they had changed the core rules to differentiate themselves. Instead, I've been pleased to see that the various terms I've learned over the years (flat-footed, flanked, proficiency, combat maneuver, etc.) are still around and mean pretty much the same thing. That's given me a lot more confidence in plunging into a rules-heavy game like this. 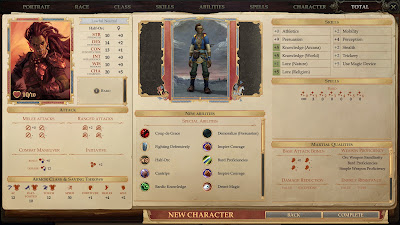 As I texted my brother shortly after starting, "I can tell that this is going to be a great RPG because Steam says I've played for 100 minutes, and all I've done so far is roll a character." I am playing as Guchok, a Lawful Neutral half-orc bard. I'm still getting a handle on her personality, but I'm thinking of playing her as a cast-against-type charismatic orc with ambitions of empire. She uses her ferocity (+2 on Intimidate Persuasion checks!) to encourage people to fall in line behind her. She wants to show that half-orcs aren't the violent barbarians that "civilized" people assume they are, and she wants to do that by building a civilization that's better than anyone else's. And if she uses some of her orcish toughness to get that civilization built, well, so much the better. 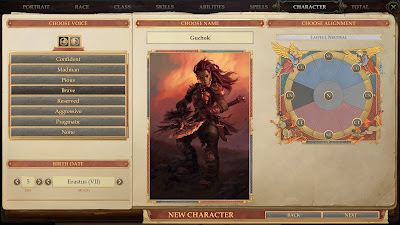 I mostly selected the bard class because I wanted to build a CHA-heavy character to maximize my Persuasion skill, and Bard and Sorcerer are the two CHA-primary classes. I almost never choose an arcane caster for my first playthrough of a game since the magic system is usually the most complex part of an RPG and it's harder to plan a build; I also had fond thoughts of my very first playthrough of the Baldur's Gate series with a bard and thought it would be fun to take a similar path this time around.

I pretty quickly figured out that this probably wasn't the optimal choice to make. Outside of the very first dialogues, when you are the only person in your party, skill checks are automatically performed by whoever in your party has the highest skill rank; there doesn't seem to be a particular advantage in having your primary character be the face of the party as opposed to someone else. (Other than roleplaying reasons, which are perfectly fine!) And secondly, the very first person to join your party is, yes, another Bard. She seems likely to be the most constant companion of the game, the one character who is guaranteed to always get resurrected. 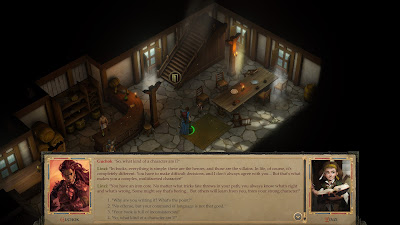 It definitely isn't disastrous. Pathfinder's class system is similar to the NWN one, but even more flexible. Every time you level up you can choose to advance one of your existing classes or take the first level in a new class. There aren't any dual-classing penalties or skill losses, just the standard warnings against casting arcane spells while wearing heavy armor. All that to say, while Linzi starts as a bard, her stats (decent DEX and INT) give her some flexibility; Guchok's raw CHA is higher, so she may remain focused as the party's primary Bard, while Linzi may become a ranged Eldritch Knight or something, slinging spells and arrows from the back line. It looks like the game does have respec options (at an increasing price), so once I have a better handle on builds I may just get rid of her Bard level altogether.


Tons of build options. They're pretty overwhelming at the moment, but also exciting. If I was the sort of person who replayed RPGs, I'd look forward to trying this game with radically different builds. 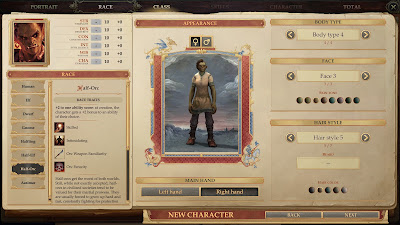 Maps. They're really gorgeous, and feel more alive than I think any other RPG I've played: not just green grass and rushing rivers, but also swarms of butterflies fluttering around flowers and rabbits hopping through grass and cats stalking through the bushes. Those are purely cosmetic but add immensely to the atmosphere. 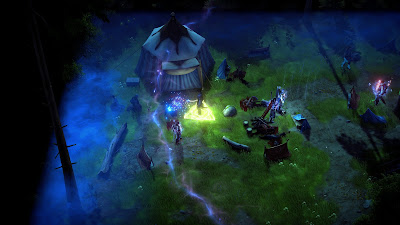 Time limits. I have somewhat mixed feelings about this, but (not having failed one yet) it feels like a fantastic solution for the old "problem" of "Why don't I just rest back to full health after each fight?". There's now some incentive to keep pushing forward after you've taken some damage to health and spell supply. I also like that there's a system around resting, which keeps things interesting and has its own trade-offs. It's giving me warm memories of Iolo strumming his lute while Dupre and Shamino sit around the fire.

Storybook segments. These are exactly like the Meres from Torment: Tides of Numenara, and so far I like the ones in Kingmaker better. They aren't one-off dream sequences: instead, they're directly integrated into your storyline, and they can use the text-heavy format to depict scenarios that would be hard or boring to do with the in-game engine. Rushing through a fiery hall to find safety, or tracking a band of kobolds along a ravine, or whatever. Skillchecks are incorporated very well here, and make much more sense than the associated pools did in Torment. 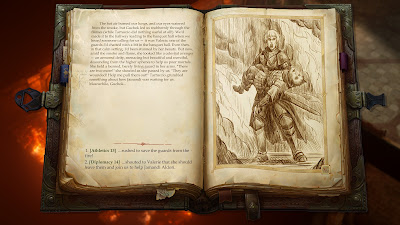 Music. It's very memorable and pleasant, and I find the tunes running through my head as I go about my day.

Companions. It's still early on, I only recently got a full party (plus one), and I haven't gotten to know them too well yet; but I'm already intrigued, there seem to be some compelling personalities, a nice variety of builds and histories, and, best of all, banters over the fireplace. 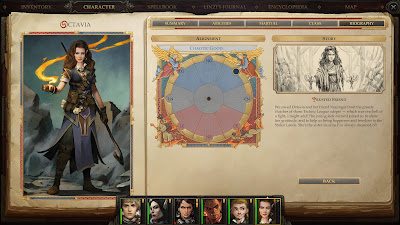 
Player character portraits. They're good, but there are a lot fewer than I would expect. If you have a particular race+gender in mind, there are probably only 1-2 options that would work. But, I do really like how unique each one is, there's a ton of personality evoked from each one. I ended up back-designing my character based on a portrait I liked ("Who is she??"), which was a fun way to approach chargen.

Non-scaling enemies. I'll almost definitely promote this up to "The Good" later in the game, but it can be pretty frustrating at level 2, when a lot of the non-random enemies you encounter feel far overleveled. Unlike Divinity Original Sin, there don't seem to be particular "zones" oriented around levels, and you can easily waste a day of traveling only to find out that you can't do anything at your destination. 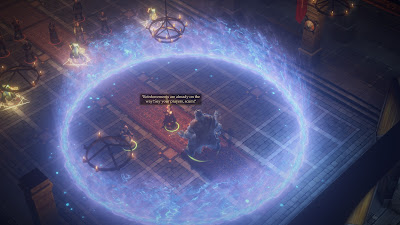 Maps and journals. The individual maps feel on the small size compared to other games, but maybe they get bigger. More worryingly, you can't add notes to either your map or your journal! This is a Big Problem for me, since I now need to fall back to old-fashioned pen-and-paper to keep track of which areas still have outstanding tasks that I can't yet tackle at my level. On the plus side, I really enjoy the first-person non-PC-narrated voice of the journal entries, it's been a while since I've seen a game do something innovative and fun with their quest tracking. 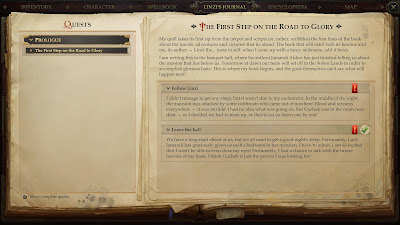 
Various UI glitches. In particular, the number 0 keeps showing up when it shouldn't (like, "You will gather 5 rations. It will take 0 to 0 hours.", which ends up taking 4-20 hours). Pretty surprising to see these after the game's been out for well over a year.

Inventory management. This is probably a lost cause at this point and I ought to stop complaining, but I shan't. It's 2020, who is actually having fun looking through each and every item they're carrying to figure out what they can safely drop in order to reduce their encumbrance? Other games have found creative solutions to this (designating followers to run back to town and sell your stuff while the rest of you keep adventuring, for example. Or just removing encumbrance altogether! Or getting rid of trash loot!), and it feels like such a step backwards to deal with it again. 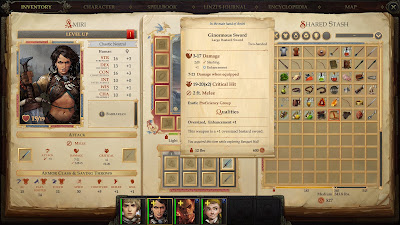 Weaponry. I had issues with this in NWN and it feels at least as bad here. You have a very limited number of combat feats available, and if you want to specialize in a particular weapon, you need to choose from one of the 50 or so available. Are you going to invest in Estocs, or Sabers, or Scimitars, or Bardiches, or Falchions, or... At this point, I just have a handful of +1 enchanted weapons, and I'm frozen by choice paralysis: What if I take a Weapon Focus in Longsword, then immediately find a +2 Trident, or a Falcata with Freedom of Movement? I really, really miss the old-school BG approach of broad categories, like "Two-Handed Weapons" and "Ranged Weapons", that were still forms of specialization but didn't lock you in as severely.

The End (For Now)


Not much to report so far on the plot or major choices. I'm looking forward to the kingdom-management dimension of the game, but, well, I need to establish my kingdom first! Or queendom, or orcish dominion or whatever. Expect more posts in the future as Guchok's journey continues!
Posted by Christopher Charles Horatio Xavier King III, Esq. at 9:58 PM