One of several nice things about returning to my commuting lifestyle has been a notable increase in my reading. Of course I could have used the time I saved on commuting to work to read, but somehow I didn't. When I'm locked into public transit on a regular schedule, though, I can plow through books like nobody's business. 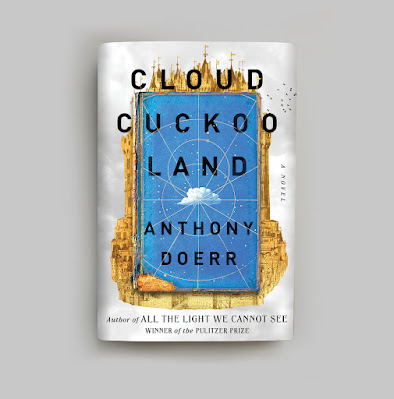 My latest conquest is Cloud Cuckoo Land, by Anthony Doerr. It's the first book of his I've read, and I didn't know what to expect, but I quite liked it. It has a really great moral centeredness, which I increasingly appreciate these days, and it does some good things with timelines and characters that are very satisfying; not exactly tricky, but using them in interesting ways.

The book moves between three or five timelines, depending on how you count them. They are interwoven throughout the novel, but in chronological order they look something like this.

It isn't in the novel, but the implicit start of all this happens in ancient Greece when Antonius Diogenes writes a story "Cloud Cuckoo Land". He apparently does this to comfort an ailing niece of his, and like much classic fiction, the author insists that it is an actual story he has discovered that depicts true events. Within the story, the protagonist goes to see the Aristophanes play "The Birds", and emerges convinced that the place depicted in the play, "Cloud Cuckoo Land", actually exists. He sets out to find it and undergoes a hapless series of adventures, being transformed into a donkey, then a fish, then a bird, and eventually finds that there actually is such a place.

This story, like most stories from antiquity, is mostly lost, due to the vagaries of time, political upheaval and fire and earthquake and rot. The story picks back up in the 1450s, where a girl named Anna living in Constantinople befriends an old tutor, learns how to read, and then discovers a copy of this book. In parallel, a boy named Omeir is born in Bulgaria with a cleft palette, grows up ostracized, and eventually is conscripted into the Sultan's army for the siege of Constantinople.

(And yes, once again it feels like my other interests are weirdly synchronizing with my current obsession with Europa Universalis IV. EU4 starts in 1444, and one of the first major events that will happen in most games without extraordinary player intervention is the Ottoman Empire conquering the Byzantine Empire. What Cloud Cuckoo Land makes even clearer than EU4 is just how important artillery was in ushering in a new age of warfare. During the medieval period, when attackers used catapults and trebuchets, strong walls like Constantinople's could stand strong; but the new era of gunpowder and cannonballs lead to huge upheaval and opportunities.)

The story picks back up again in a long stretch in Idaho from the 1930s through 2020. A Greek immigrant comes to America with his son Zeno, volunteers to join the military after Pearl Harbor, and dies in action. Zeno, a closeted gay man who never seems comfortable in his own skin, follows in his father's footsteps and joins the Korean War effort, where he is captured and placed in a POW camp. There he meets Rex Browning, a British teacher of classics. They bond over their shared and obscure knowledge of the Greek language. They are separated during the war, and reunite much later, and late in life Zeno takes up an interest in translations, encouraged by Rex. The long-lost copy of Cloud Cuckoo Land is rediscovered in the Vatican library and put online for everyone to read; it's been badly damaged and its sections are out of order, but Zeno takes on the challenge of crafting a readable translation from the surviving fragments. These translations are scattered throughout this novel, separating the sections.

Late in this timeline, we meet Seymour, a troubled young man who is far along on the autism spectrum. When we first see him, he seems like the most monstrous person imaginable, shooting a man in cold blood and preparing to detonate a bomb in a library where children are preparing to put on a play. As we rewind and retrace his steps, we see what led him to this point, primarily a deep and sincere love of nature, incredibly harsh experiences in human society, and the cynical manipulation of extremists.

Finally, there is the Argos in the future, a generation ship fleeing a depleted Earth to restart civilization on a far-away planet. Konstance is the protagonist here, and she's grown up hearing stories of Cloud Cuckoo Land told by her father. Eventually she starts doing some of her own research, discovering that there are other versions of the story.

There are a lot of themes in this book, which I'm having a hard time precisely articulating. One core idea might be how stories are both ephemeral and enduring. When we look at Cloud Cuckoo Land, we can feel sorrow for all that was lost, but we can also feel joy that the story continues to entertain people for nearly three thousand years. You can align that mixture of decay and tenacity to the trajectory of the human race itself: it is dying, killing itself through violence and destroying its home through environmental degradation, and  yet people continue to love and make art and grow.

One kind of irony in the novel is how the more fragmented and damaged the text becomes, the more invigorating and inspiring it is. For a long time Zeno feels immense frustration at his inadequacies as a translator (which of four possible words should he use to translate this ancient Greek term?) and the difficulty of the text (how can he translate an incomplete story?). But thanks to the insight of a child, he reconciles the dilemma and finds a liberating freedom in being able to invent the missing pieces. In this way he follows in the footsteps of Diogenes himself. At the beginning and the end of the story's lifespan, people made up things to please their audience. In the middle of the lifespan, people scrupulously guarded the literal words of the text. I imagine an omega shape, with the end curving back towards the beginning, in form if not in content.

I was pretty impressed by how Doerr managed Seymore's storyline. These days I tend to be unenthusiastic about redemption arcs, either painting villains sympathetically by showing righteous origins or focusing on how they convert to good. This book does both of those things, and somehow does so without triggering my standard distaste. You get a very visceral sense for what what Seymore's existence is like, from the physical torment he experiences through sounds and other sensations in the world to the social isolation he endures. Nearer the end, we see the hard work he does to try and atone for his mistakes: it isn't flippant, it centers the victims instead of the perpetrator, it recognizes the limitations of restitution and the power of forgiveness without putting the onus of forgiveness on the victims.

I did really enjoy the twist with the Argos, which I didn't see coming. More broadly, I like how the book recognizes the immense threat of climate change; even if it isn't explicitly about the environment, I kind of feel like any book set in our future has to acknowledge the course we're currently on. I've noticed this as an emerging trend among my favorite authors, including David Mitchell, and hope it continues until and unless we can somehow correct our course.

In the afterword, the author describes this as a "book that is a love letter to books". I'd thought of it that way while reading it, as it's explicitly about the survival and evolution of a particular book over time. That said, writing a book about how good books are feels a bit like making a movie about how great movies are: you know your audience will already be on board for that message without much effort on your part. Which got me thinking, I would love to read a book that hates books: something with the message "books are dumb and pointless, only losers write books and even bigger losers read them, if you're reading this book then you're an idiot!" That idea really tickles me for some reason.

But back to Cloud Cuckoo Land: It's a thoughtful, engaging book, and a swift read despite its length. There's a lot to chew over inside it, but it's also a well-told and compelling story in its own right.