Time is the wisest counsellor of all

I've just wrapped up my first game of Beyond the Sword. Even though I was most excited by the prospect of the scenarios in this expansion, I ended up playing a regular game, for reasons that escape me at the moment. It was fun, and ended rather well. 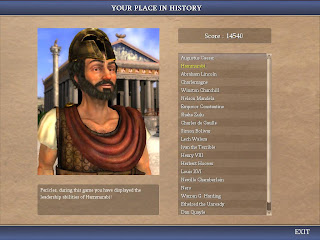 I ended up with a cultural victory, though I was also half way done with my space ship. I'd come within striking distance of winning a religious victory through the Apostolic Palace on a few occasions, and may have squeaked out a diplomatic victory if I'd finished the United Nations.

A few random thoughts on the expansion:
Overall, I'm really impressed. The expansion brings some interesting new systems that enhance the game without breaking the core fun aspects. It has a really high level of polish, which integrates nicely with what's already there.

I think that's enough for now. I'm kind of civ'ed out for the moment - that game took longer than I had expected - but I look forward to trying out some of those cool-looking scenarios. Be warned, God of Winter! The time of wrath draws near!
Posted by Christopher Charles Horatio Xavier King III, Esq. at 4:01 PM