There's been a lot of interest lately around the upcoming update to Star Wars: The Old Republic. Bioware has been teasing us for a while about it, and this week they held a Guild Summit in Austin to announce, Apple-style, what would be ahead for us. The answer is a little for everyone. One of the nifty things about SWTOR is how broad it is; pretty much anyone can find something really fun for them to do, without needing to participate in activities they don't enjoy to advance through the game. For example, apparently one of SWTOR's most popular features is Player-versus-Player (PVP) combat, with something like over 80% of players doing it every day; but I've never done it once, and don't feel the lack. So, while I don't care too much about version 1.2's updates to PVP (player rankings, a new Warzone, removing faction restrictions from Warzones), there was plenty of stuff there that I found delightful that many other players won't ever bother with (dancing with your companion, fixing the stats on end-game PVE gear, being able to put endgame mods into custom pieces of armor).

Most of my personal interest with 1.2 has to do with the "legacy" system, which lets you share perks across all the characters you've created on a server. Bioware's been very vague about how this will work, but there are finally some specific examples. For instance, once you reach level 50 as one species, you'll be able to use that species for any new character you create, regardless of class or faction. This means that, for example, you could create a Chiss Jedi Knight after you had played a Chiss Sniper to level 50. We'll also be able to "inherit" abilities from other characters; for example, your Smuggler isn't a Force user, but she might be able to use Force Choke on her enemies. Down the line, you'll eventually be able to share a bank with other characters, and so on.

Part of what I love about this is how it's actively encouraging people to start new characters. While I love playing my Operative, I'm also keenly aware that I'm only experiencing about 1/8 of the storylines that Bioware wrote for all the classes. Going from a level 50 character back to a level 1 character could feel kind of pointless, but between Bioware's amazing writing and the fact that any character's actions will eventually benefit all characters, frees me up to enjoy the ride without worrying about short-changing my main character.

As you may have guessed by now, I've taken the plunge and created a secondary (or "alt" for alternative) character. I'd really been hoping to wait until the legacy system rolled out, and/or Bioware finally implemented the long-anticipated changes to the romance system, but now feels like a good time to start, in anticipation of the changes to come. So... meet T'may Cirion!

T'may is a female Chiss Bounty Hunter. I'm still not sure yet whether I'll make her a Mercenary or a Powertech; I'll probably check in with my guild and see what they need.

I'm trying really hard to pretend that I'm not playing dress-up with dolls, but I'm pretty happy with T'may's look. The character creation system is actually really quite good, and has great variations for each species. Seberin had a lot of choices for cybernetic implants, and T'may could pick between a lot of cosmetic options. As a Chiss, T'may could choose between various shades of blue for her skin, while Twi'leks have a wider rainbow available. 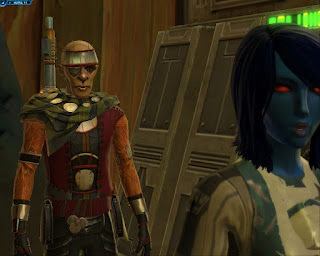 Oh, and here are a couple of fun easter eggs that I remembered from Nem'ro's cantina. 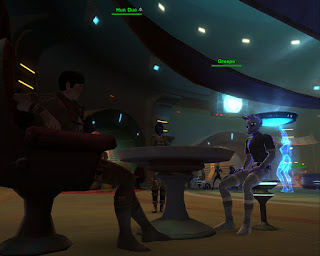 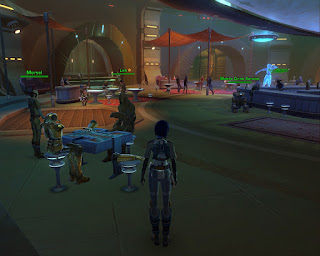 Hee hee... I love the droid gambling away his limbs to the Wookie.

And, hey, somehow I never made this connection before, but you can actually see Nar Shaddaa from the surface of Hutta! It's huge!

I'll get there soon!

Meanwhile, things are a bit quieter for Seberin these days. After a burst of activity with hard-mode flashpoints, there have been fewer groups forming lately and so less action there. I did finally get enough Tionese crystals and commendations to purchase a helmet, which I promptly hid because it was so ugly. Also, I swapped out most of the mods since it had too much Accuracy and too little, um, useful secondary stats. Still, I'm feeling pretty happy about my gear levels, and am eagerly looking forward to running something other than Black Talon Hard Mode. I should have enough Columi commendations soon to purchase a piece of that, too, and am just a few days from getting my Rakata earpiece. Several members of our guild have recently hit 50, with some others close behind, so I'm really hoping we can start doing semi-regular groups to tackle the flashpoints, and eventually the operations.

Oh, yeah: also, I (and every other subscriber) can give out three free 7-day trials to SWTOR, so if you're curious about the game and would like to try it out, just let me know! From what I've read, the trial lets you create as many characters as you want on any server; you're limited to level 15, and restricted to the areas that a character of that level could normally reach (basically your starting planet, your fleet, and your capital planet). It does include access to the Black Talon / Esseles flashpoint, which I think is one of the best selling points of the game. In practical terms, depending on how much you play, you could probably play through the origin story for about 3 characters during this time, or take 1 character all the way up to near the end of their capital planet's quest storyline. Bioware won't delete the character after you're done, so you could choose to subscribe and keep playing, or leave it alone and come back in a few months to pick up the story where you left off.
Posted by Christopher Charles Horatio Xavier King III, Esq. at 10:19 PM