Another quickie update on The Old Republic:

I'm pretty happy with where Seberin, my main cyborg operative agent, is at now; after running a few hard-mode flashpoints (including a couple of long and hard but fun and ultimately successful runs through Boarding Party), I've been able to pick up some really cool pieces of equipment. I recently got my first set bonus: thanks to my Tionese helmet and my Columni gloves, I now get a 15% boost to my backstab critical chance. Together with all my other stats and abilities, that lets me crit more than 50% of the time. And, since I'm grouping with talented tanks, I can get those off as frequently as the cooldown finishes for long boss fights (at no energy cost, and with Acid Blade applied).

Sorry to be such a nerd, but as a damage-dealer, I'm really happy with that.

At this point, I'm going to keep checking in on the hard-mode flashpoints, but for the most part I'm waiting on operations. My guild is trying to pull together an 8-person group to do this, so I hope that in the next few weeks we'll be able to crack into Eternity Vault.

Most of my time and interest has been going into T'may, my Chiss powertech bounty hunter. She's such a fun, great character.

From a plot standpoint, the class storyline for a bounty hunter is radically different than that of the imperial agent. I've barely interacted at all with any Empire officials; everything has focused around The Great Hunt, a grand competition to identify the best bounty hunters in the galaxy. So, while I don't see nearly as many folks in uniform, I've seen approximately infinity percent more wookies... the Huntmaster is an awesome, probably 11-foot-tall wookie who runs the show with style and enthusiasm.

So far I only have my first companion, Mako, but she's been wonderful. We get along way better personality-wise than Seberin and Kaliyo  did. Mako is a lot of fun - she's enthusiastic, generally upbeat, with a sly sense of humor and a love of larceny (only against people who aren't her friends). She feels like a real person, though, and her generally sunny disposition gets clouded early on when her mentor is killed. I already feel much more attached to her story than I did to Kaliyo's, and am really regretting that Bioware didn't see fit to implement SGRAs at launch. Sigh...

What's been really interesting and fun, though, has been learning to play another class, and more than that, another role. I actually held off for quite a while on creating a second character because I was worried about how hard it would be to juggle two different sets of abilities. Each class (and advanced class) has their own unique abilities, and there's very little overlap between the two... the bounty hunter doesn't have any stealth abilities, and has a lot more area-of-effect attacks than the agent did. That said, now that I've gotten into it, I'm finding it isn't hard; I'll play for an hour on Seberin, then switch over to T'may, and don't really have a problem. I do map some abilities to the same keys: X is always the interrupt, R is my resource recharge (energy probe on the agent and vent heat on the bounty hunter), Shift+R uses a medpac, etc. Still, the bulk of my abilities are different, and at least so far it's been fine.

More importantly, though, I'm learning how to tank. My server has a shortage of tanks, and so they're in high demand for groups. I've been way more social with T'may (meaning, I'm at least slightly social), and have been joining in with other groups to attempt heroic missions and flashpoints. I ran Black Talon three times when I first arrived at the Fleet, did almost every heroic on Dromund Kass (except for Friends of Old), and just last night ran with a great group through Hammer Station and Athiss. As a result, this has been a very different game experience for me. I'm already starting to add people to my Friends list (mainly competent healers and people who chat in complete sentences), and am getting as much fun out of solving difficult problems with a group as I am with experiencing the class story.

As a result, I'm seeing huge parts of the game that I'd never experienced with Seberin. Hammer Station and Athiss were AWESOME - huge, epic areas that set up the story for the evolving conflict between Republic and Empire, with echoes of the Infinite Empire, Senatorial treachery, archaeological malfeasance, other terrific stuff. Having done these flashpoints, I know I'll continue along this social route, if for no other reason than to experience the rest of the flashpoints.

So, back to tanking: I've read two phenomenal quotes that are funny, and also great, brief primers on how to approach the specialized roles of an MMO:
"If a healer dies, it's the tank's fault. If the tank dies, it's the healer's fault. If the DPS dies, it's their own fault."
That's perfect. DPS should always follow, never lead. They should stay out of the fire. So long as they do that, they will never die. Good DPS will let the tank build and keep aggro, and will maximize their damage while making sure they don't grab away threat.
The tank needs to make sure that every enemy is targeting him and only him. (Or her and only her.) If the tank loses aggro, the enemy will target the healer, and the healer will die (so everyone dies). A tank needs a combination of gear, stats, and skills to do this. It's easier to tank if you're powerful, but a tank needs to worry about tactics more than any other class in a fight.
The healer needs to spam heals on the tank. That's it. IF everything is going well, the healer can heal a DPS who stood in fire or grabbed aggro, but if the tank's in trouble, they need to be willing to let the DPS die. Occasionally, you'll get someone like a mercenary who wants to DPS but joined the group as a healer because that was the only slot available. If they can't resist fighting, then the tank will die (so everyone dies).

A different quote that reveals the same truths is:
"DPS is fun. Healing is a responsibility. Tanking is a job."
I'd agree with each part of that. Seberin was pure DPS, and it was a lot of fun - you're always fighting and killing things, which is what most people enjoy most in games. Other than beating enrage timers on hard-mode bosses, DPS doesn't really need to do anything special; most fights can be (eventually) beaten with only a tank and healer.
A healer only needs to do a few things (heal the tank, stay out of fire, apply buffs as available), which aren't terribly hard, but are incredibly important.
A tank has the biggest overall responsibility for a group. He/she often ends up leading them, setting strategy, assigning roles, performing ready checks. During a fight, the tank needs complete situational awareness of the entire battlefield, making sure he/she is keeping threat on every enemy, taunting back anyone rushing the healer, hitting each enemy often enough to keep them on you. I'm really enjoying it, but it totally is a job. DPS is along for the ride, and the healer is my co-pilot.

I'm now level 18, and have acquired all the skills that will be useful in my role. Some of these are fairly permanent: an Ion Gas Cylinder to build more threat and mitigate damage, and a Guard that I can use to protect my healer and lower his/her threat level. Others need to be applied thoughtfully throughout a fight. Death From Above is the single most fun attack in the entire game, and is also the perfect opener for any engagement: it does a massive amount of damage to everyone, what's not to love? My flamethrower is another great area-of-effect attack that I use to make sure everyone's mad at me; if DFA isn't available, I generally use it to open. Against normal enemies, stuff like Explosive Dart and Missile Blast will incapacitate them and act as a light form of crowd control while generating area threat. My core rotation against a boss is a combination of Rocket Punch, Rail Shot, Unload, and Explosive Dart, with my Rapid Shots filling in the holes. I'll continue to adjust it, but so far it's been working well.

I was about halfway through Athiss before I finally "got" how to use my taunt, and now I love it. It was all thanks to Khem Val, who kept stealing threat from me. I'd mapped Neural Dart to V (the key I use for Acid Blade on my agent), then started pressing it, and realized that it solved all my problems. I'm really grokking tanking now, and loving it.

Leveling is going a lot faster this time. I'm mostly doing my class missions and grouping for heroics and flashpoints; I only do regular planet missions if they're in the same area I need to be for my class mission. For example, I totally skipped the entire Revanite branch of the Dromund Kaas quest series; I had plenty of experience already, and I'm not nearly as excited about repeating old content as seeing new Bounty Hunter or flashpoint stuff. Oh, but space missions are still a GREAT way to level. I had reached level 16 right when I got my ship, and was at 17 once I had finished all the initial space missions. Anyways... between me knowing what I'm doing, focusing on high-experience missions, and being able to spend virtually unlimited funds on my gear, it's been a blast so far. Good hunting!

Here are some pictures! 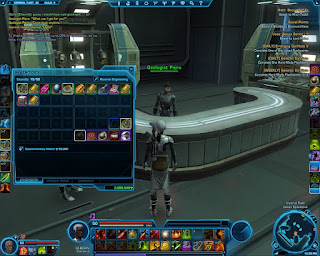 Back to Seberin for a moment - here is the most money I think I'll ever have, at a hair over 3 million credits. Bioware has added an NPC on the Fleet who is temporarily selling super-high-end colored crystals, so I splurged and spent 250k on a +41 blue power crystal for myself, and a +41 blue crystal to be reserved for T'may's tanking once she turns 50. Since I got the Rakata implants and ears, I probably won't be running the dailies anymore, and so I expect a steady (but slow) dwindling of cash. 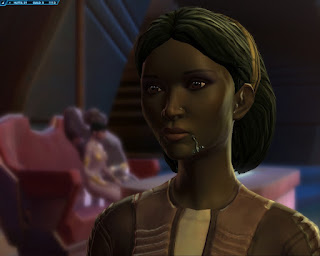 Chatting with Mako on the fleet. I really like this customization, except for the implants. Pay no attention to the half-naked lady in the background. 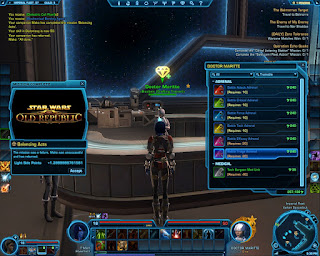 Awesome bug! Someone forgot to cast their double to an int! 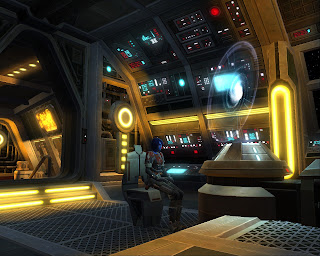 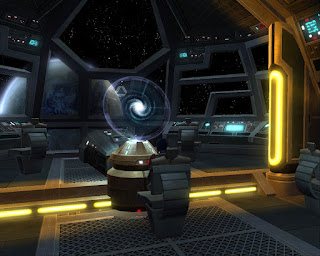 T'may is the proud owner of a new space ship! Well, new for her, anyways.
Posted by Christopher Charles Horatio Xavier King III, Esq. at 9:47 PM