I went back and wrapped up the final two routes of Hate Plus. I’d initially intended to space this out a bit more, but noticed that there’s a Steam achievement for completing all three routes in nine real-world days, and since I was enjoying the game anyways I decided to go ahead and do that. Fortunately, I finally figured out that it’s possible to scroll the logs directly using the scroll wheel, so I was able to save myself from carpal tunnel syndrome derived from clicking that troublesome Down arrow another billion times.

It was… really fantastic! And surprisingly different! Probably 95% of the log messages across all three routes have exactly the same content; each companion can access a separate set of logs (one of which gives more insight into the “villain,” the other helps explain the transition between the events described in Hate Plus and those in Analogue), but most of the game is spent reading, and the words are exactly the same. But, I was shocked by how the different context you read the logs in can completely change your emotional reaction to the story. Even more so, though, the conversations with your companion are completely different, and cover radically different topics and arcs.

I really wonder how my reaction to the game would have changed if I’d done *Mute’s route first. I pretty much completely agreed with *Hyun-ae’s reaction to everything in the story: I thought that Old *Mute was really cool, that Ae-Jeong and Mae Jin-a were incredibly cute together, that Kim So-yi was admirable, etc. Unsurprisingly, *Mute has almost opposite reactions to pretty much everything. I’m used to disagreeing with her, particularly on anything gender-related, but I do wonder if my opinions of the characters would have ended up differently if I’d encountered *Mute’s commentary before *Hyun-ae’s.

The biggest difference in Analogue between *Hyun-ae and *Mute seemed to be their different approaches to the truth. *Hyun-ae is reserved, withholds information, and is willing to deceive if she thinks it serves the greater good. *Mute is chatty, bombastic, sometimes abrasive but always perfectly honest about everything, clearly explaining what she knows and what she thinks about any topic. That’s less of a distinction in Hate Plus: *Hyun-ae is much closer to your role of an outside observer, with no direct stake in the outcome of the story, so she’s mostly fulfilling her own curiosity. *Mute, in contrast, is VERY tied to the events here, and she not only learns a great deal about her history here, but also suffers some extreme stresses that force her to revisit some of her most deeply held beliefs. 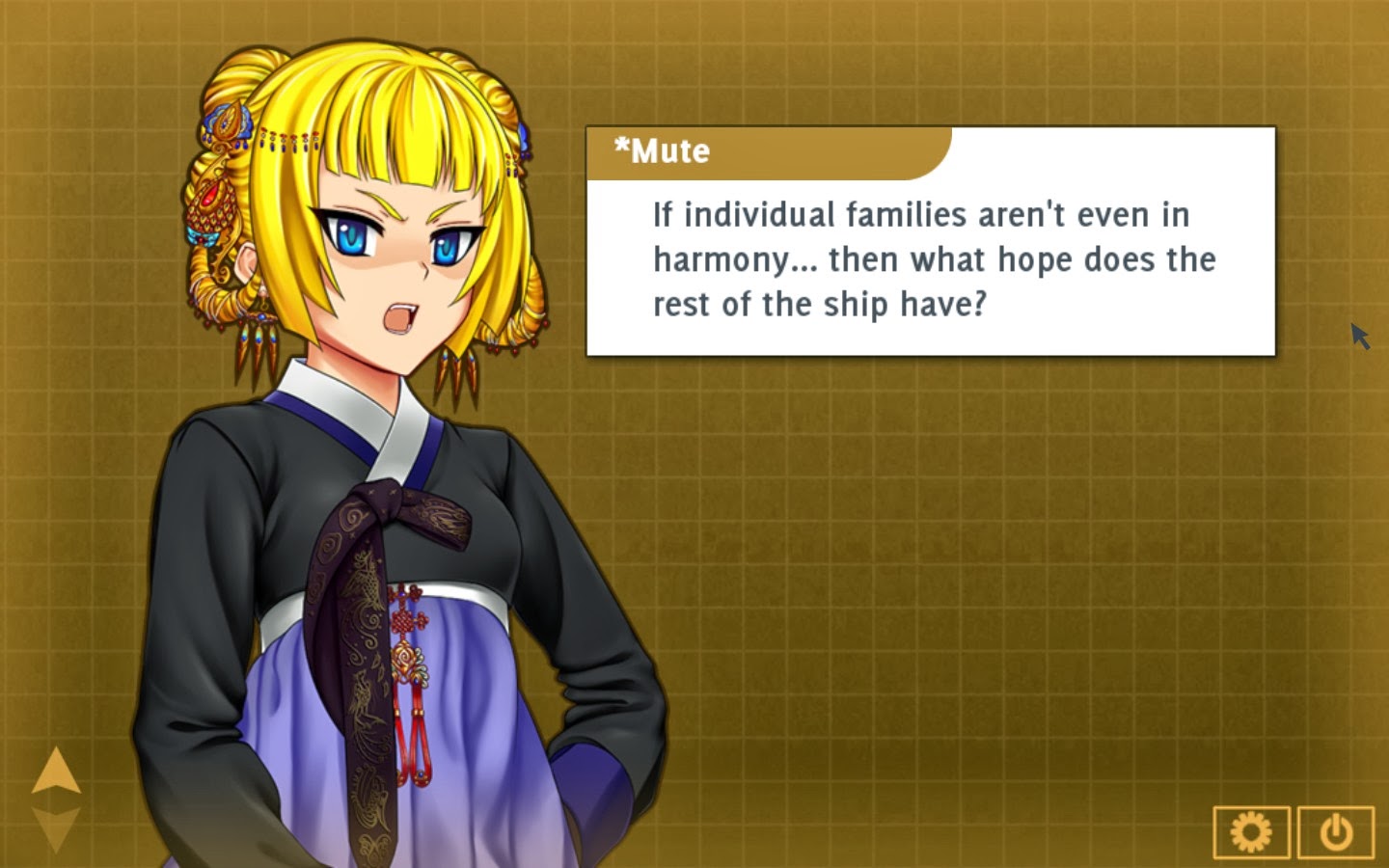 Relating to *Mute has always been difficult for me in these games: my instinct in any game is to sympathize with the other character and try to make them like me, but her opinions on proper roles are so out-there that I have a hard time doing so. This made the first couple of days rather fraught: I really liked the version of Old *Mute we were reading about, and kind of wish that she was more like her old self, but how on earth would you say something like that to another person? I tried to maintain an uneasy balance between affirming *Mute’s value while questioning her values. It didn’t exactly work, and after she learned the truth behind her “death,” she rebooted herself.

New *Mute on the third day was also fascinating. She’s derived from *Mute’s original code, and you can see many of the same instincts at play; but, first, she has no memories, and thus a limited pile of ammunition to draw from; and second, her very first new memories are the details of her prior failures, so she’s infinitely more reflective and self-doubting than before. I re-read through all the logs with her, and it was interesting to see such different reactions out of *Mute. (At least, it was when there were any reactions. She’s unafraid to say when a log doesn’t interest her. *Mute always had an opinion; even if she didn’t think a log was relevant, she would be ready to praise or criticize the actions of the people inside. New *Mute is focusing on more important existential questions, and could care less who was dating who.) 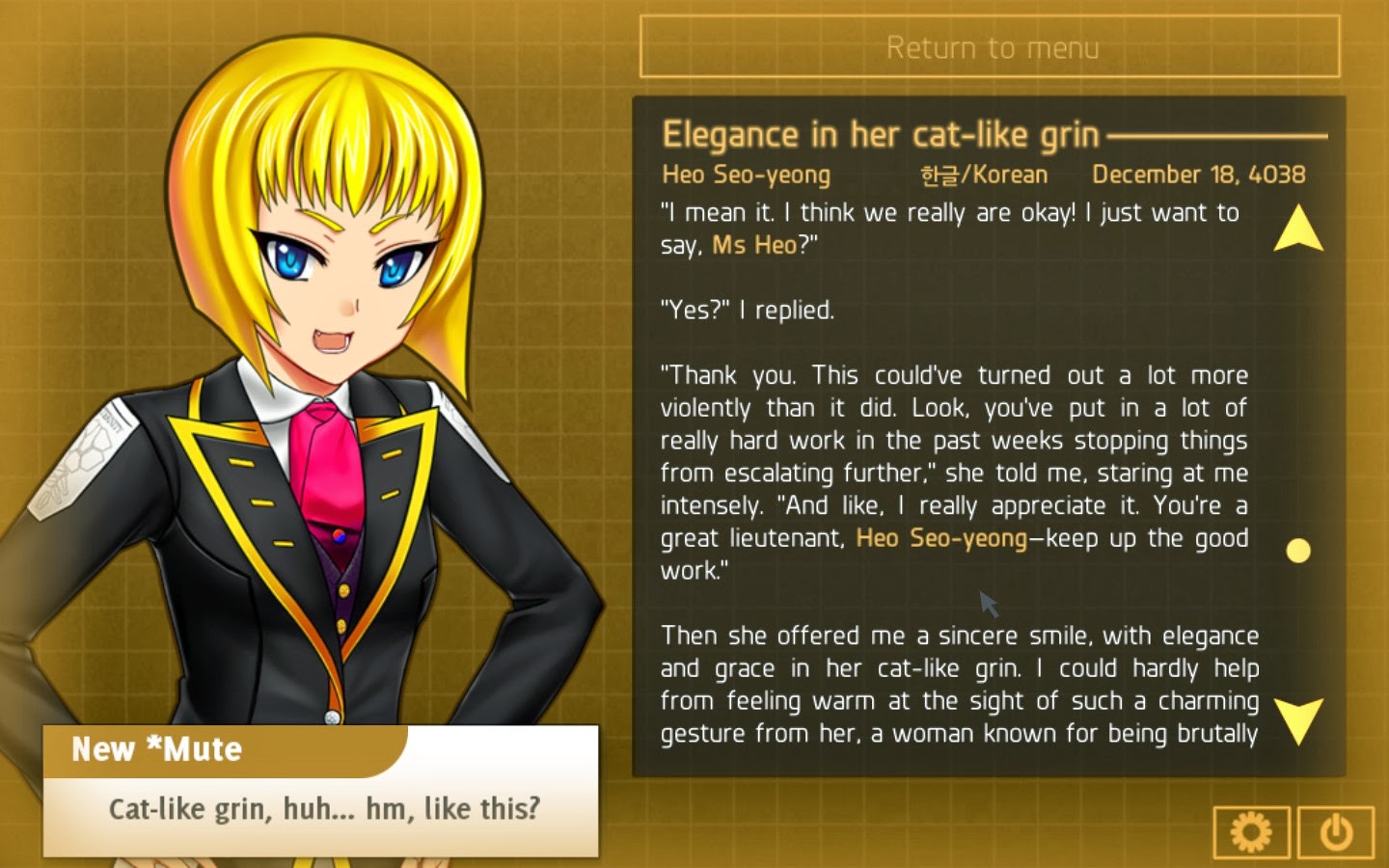 This ending was definitely more bittersweet than *Hyun-ae’s route, but it still ends on an upbeat note. I liked the gentle way that the game removes your romance and replaces it with something arguably even better: a fun, capable, spunky sidekick.

Finally, the third route! I needed to follow some online guides to unlock the Harem ending in Analogue, so it was really fun to see the original character designs again and see that ending for the first time. This is a route that, for the most part, feels a lot more goofy and fun than the occasionally-angsty single-companion paths. This trend extends into Hate Plus. Both *Hyun-ae and *Mute are on-screen almost all the time, and they not only have lots of really fun discussions and fights, but also some great fourth-wall-breaking moments, like complaining about how you cheated or how annoying the interface is. 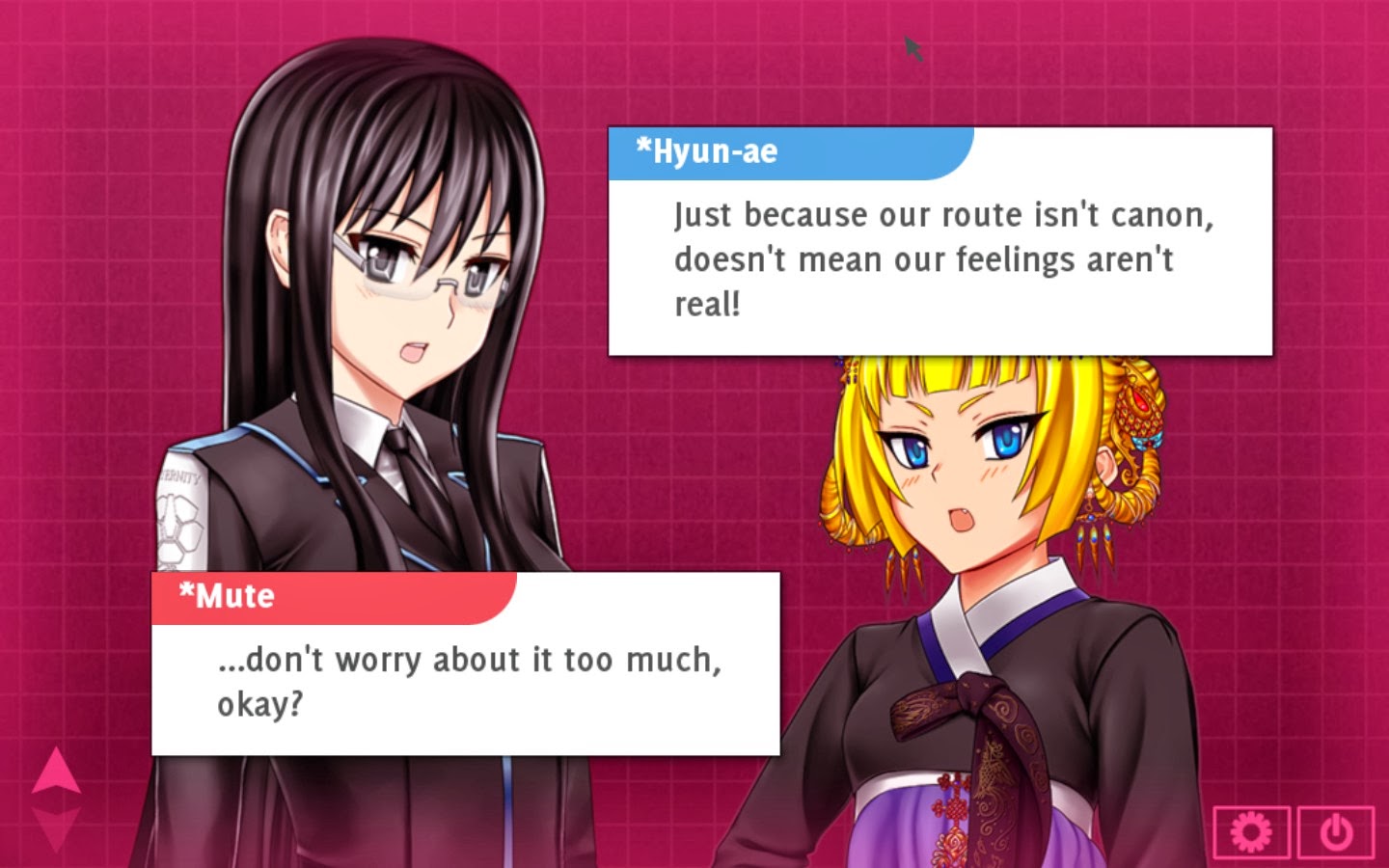 I really liked the subtle ways that the outer stories reference one another. The Lunar New Year was a very big deal in *Hyun-ae’s branch. *Mute doesn’t have any use for the holiday, though, just curtly suggesting that you perform whatever rituals you want; this wouldn’t have meant anything to me if I’d done *Mute’s route first, but as it was, it felt a bit sad to have the absence of a celebration. And then, in the Harem route, there’s actually a bit of debate between the two of them: *Hyun-ae still makes her special hanbok, but *Mute makes fun of her for doing so. Similarly, *Mute’s shocking suicide in her own route raises the stakes considerably on Day Three of the Harem route. Thanks to *Hyun-ae’s intervention, *Mute still survives, but we know that the threat is real. (Conversely, if you were to play the Harem route before *Mute’s route, the ending of Day Two would be incredibly tragic and foreboding.)

Speaking of which, Day Three of the Harem route is one of the most intense gaming experiences I’ve had for a long time. It was also the one sequence in Hate Plus that felt reminiscent of the reactor meltdown in Analogue, where I was under pressure to make the right decisions. There’s a ton of dialogue in Hate Plus, but for the most part I was happy to just role-play it, picking the responses that most closely matches my own opinions, and I was happy to continue the story wherever it went. On Day Three, though, the stakes felt incredibly high, and that was the one point in the whole game where I made frequent saves and reversed course if I felt like things were going in the wrong direction. I was desperately aware of *Mute’s fragility, and determined to find the right things to say in order to avert (another) tragedy. And, of course, it felt incredibly satisfying to finally navigate through those rapids and feel like we’d built a stable foundation for moving forwards.

The endings of all routes were very touching and well-made. The harem route deserves special mention since you’re invited to pick one of three ways to end and encouraged to make a screencap for posterity - hey, it’s like this game knows me! I played through all three choices and, while each was short, they were very different and wonderful in their own ways. My first pick, the kissing ending, was funny and sweet. The second, the hate ending, was pretty thought-provoking. And last of all was analogue, which was a pretty fantastic capper to the themes developed across all three of Love’s games that I’ve played, and tying them into the real world in a compelling, encouraging, good-natured manner. “Digital's fine if you don’t know any better... but analogue is way better!” Yeah, yeah… now even my own games are telling me to start dating... geez, thanks! (In all seriousness, though, it was really touching and sweet, and all the more powerful in light of the game's previously demonstrated interest in crossing the chasm between player and character, between game and life.)

I hadn't intended to make an album for this, just a couple of screencaps for this post, but enough funny stuff happened in the last two routes that I ended up throwing one together. It's a bit unusual for me; I tend to be all about albums for RPGs, since I feel like I have some input in shaping my character and thus can present something slightly different from what any other player will experience. Games like Analogue and Hate Plus do offer some agency, to the point that I feel invested in the outcome, but not the customization that would make my screenshots look any different from anyone else's. Anyways... on the off chance you'd like to see them, here they are. Beware! They're filled with spoilers!

In the short term I'll be plunging back into RPG world for a while. Shadowrun: Dragonfall just came out, and I'm maybe a bit less than halfway into Mask of the Betrayer (which has progressed from "good" to "potentially classic"). It's good to know that there are still some more Christine Love games out there, though. It sounds like she'll be moving away from the Visual Novel format for her next game, but I'm also looking forward to eventually checking out some of her other free offerings. While they don't follow the same storyline as Analogue, I strongly suspect that they feature similarly excellent writing, and that's something I'm always interested in experiencing.
Posted by Christopher Charles Horatio Xavier King III, Esq. at 8:54 PM