Dragon Age: Inquisition is holding up as one of my favorite games, of ever. Its first expansion, Jaws of Hakkon, provided a great excuse to dive back into the world. There is still plenty that I haven’t done in the main game yet - the Hissing Wastes remain largely unexplored, along with most of the Emerald Graves and some other locations - but the prospect of additional storylines prompted me to pony up for the DLC.

BioWare has gotten really great at putting together DLC recently; in particular, the expansions for Dragon Age 2 and Mass Effect 3 did a fantastic job at responding to specific criticisms that players had about the main games, and in many respects surpassed them. I believe this is mostly due to BioWare’s surprising humility in listening to and responding to their fans, as they seem to be very in tune with the cultural pulse around what aspects people enjoy, dislike, and want more of. 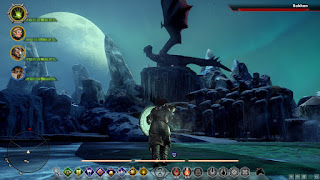 JoH doesn’t provide as dramatic a sense of improvement, but I think that’s mostly because Inquisition is such a great game to begin with. It’s more about giving us stuff that we already like than fixing anything fundamentally broken in the game. (Though the latter is arguably accomplished thanks to the Black Emporium, a free update distributed separately from the DLC, which finally lets players fix visual blemishes in their characters.) We get to banter more with Scout Harding and learn about her history, elevating this fan-favorite character from a minor source of exposition to a supporting sidekick. There’s also a lot of new banter between companions: not even tied in to the new story, just further developments in their funny, fraught relationships. And, on the flip side, BioWare has omitted some of the aspects of the game that people didn’t particularly enjoy; most noticeably, there are no new requisition orders from your camps. 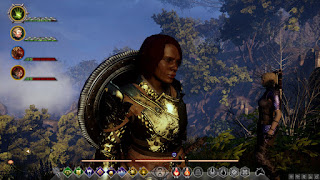 For better and worse, JoH feels like a big new area in Inquisition rather than a sequel to Inquisition. You have the same freedom of exploration, gorgeous new vistas to see, cultures to learn about, side-quests that range from the rote to the fascinating. I’ve been impressed by the work BioWare went to in making this content available at various points during the game: much like the Dragon Age 2 DLC, you can play it at nearly any point, including after the end of the game, and the dialogue within it will be updated to reflect your current status. I happily played it in my post-end-game Aztar Cadash save, and was satisfied with the occasional recognition of the massive feats I had already accomplished. At the same time, the plot in JoH feels sufficiently weighty to be worth my Inquisitor’s time. 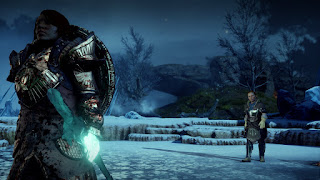 MEGA SPOILERS for Jaws of Hakkon

There’s a bunch of great lore in the game. A lot has to do with the Avvar, who have been present since Origins but, thanks in part to the discarded Human Commoner origin story, haven’t really been explored to the same extent as many other ethnic groups. As is so often the case in Dragon Age, we see that they aren’t a single monolithic entity, but a dispersed and varied culture with conflicting leaders, perspectives, and agendas. On the whole, they have a strong Nordic feel about them, reminiscent of the Wildlings in Game of Thrones / A Song of Ice and Fire, as well as the Nords of Skyrim.

It doesn’t directly play into the plot much, but one thematic plot thread that I particularly enjoyed had to do with the Avvar’s reaction to the “modern” world. You spend some time in Stone-Bear Hold, a mostly-peaceful settlement. Their leader, Sun-Hair, is really quite progressive: she wishes to trade more with the “lowlanders”, and has little use for the more violent tendencies of the Jaws of Hakkon. One of my favorite parts was when you find some notes where she was practicing a letter to the Orlesians inviting them to trade: there’s a wonderful mix of pride in her culture, frustration at the limits of her literacy, embarrassment at how she will be perceived, hopefulness for the ways this exchange could improve the lives of her people. I was strongly reminded of the perennial dilemma faced by indigenous people confronted with an outside culture, as they try to strike a balance between holding on to the traditions which have sustained them for generations and the advantages offered by joining the global monoculture.

The deep lore in the game, though, has to do with the history of the Inquisition. We’ve learned a lot about this over the course of the main game: how it was originally a separate faction, devoted to stamping out the threat of mage abominations, and relatively late in joining the Chantry to present a unified force against the Blight. We get some impressive lore bombs here, of which the biggest might be that the old Inquisition was led by an elf, who was also a personal friend of Emperor Drakon. We already know that, around the time of the Exalted March on the Dales, the Chantry hierarchy purged most references to elves from the canon, removing persons such as Andraste’s disciple Shar’tan. That same effort was successful in wiping the record of elven involvement from the founding narrative of the Orlesian Chantry.

Anyways. As usual, Dragon Age does a fantastic job at evoking real-world scenarios; it’s hard to hear this story and not think of events like the establishment of the biblical canon. There isn’t a one-to-one correlation, and the game isn’t meant to be an allegory or anything, but it certainly adds to the game’s great strengths at feeling complex, messy, and real.

As has become rote, I took a whole bunch of screenshots of my time in the expansion and uploaded them into an album. Some of them are very pretty! Others are silly. Many contain spoilers.

On the whole, I'm really digging BioWare's approach to DLC. In contrast to the long run-up to Inquisition, with frequent tantalizing glimpses at the upcoming game, they've been very tight-lipped about further releases for Inquisition, not announcing JoH until right before it went on sale. Of course, this also means that the next expansion could drop at any time, and after this experience, I'm even more eager to pick up what comes next.
Posted by Christopher Charles Horatio Xavier King III, Esq. at 8:53 PM