Well, how's this for a milestone: I've reached Level 50 in Lord of the Rings Online! That's a nice, round number. Significantly, it was also the level cap of the game when it first launched. I'm now at what used to be the end-game grind; that was eight years ago, though, and now it's merely an exclamation mark on my journey to Mordor. 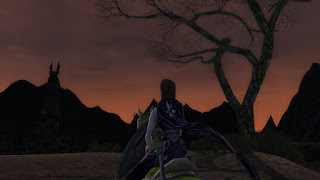 Turbine (the game's developer) has done a lot of work over the years to streamline the gameplay and make it less daunting for newbies like me. Back at launch, everyone was hitting the same content at the same time, so they could make certain quests and sequences challenging enough to require players to group up and complete them. Now, it's much harder to find a large group at low levels, so those big quests have been updated so they can be soloed by someone on-level. Most often, this is done by providing the "Inspiration" buff at the start of an instance, which massively boosts your character's Morale and other stats. The actual content still plays out the same as before, but you can do the work of six people. 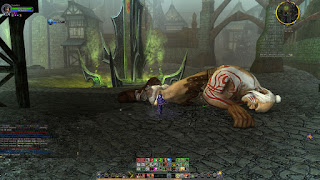 This isn't to say that group content has been removed from the game entirely. There are still plenty of Fellowship and Small Fellowship quests along the way that provide more challenging goals for people traveling in a party. But content in the epic quest line and other significant gates doesn't require grouping, and there's plenty of experience and loot to be found elsewhere. The end result is that I've been able to play the MMO like I would a single-player RPG, which is exactly what I wanted to do. It's been really fun to solo, now that the grind has been streamlined away.

From a gameplay perspective, it finally started to get difficult near the end. I'm playing as a damage-focused Minstrel, and easily rolled through the first part of the game... I think I only died, like, once or twice before level 35, and only felt under pressure when tackling a large group of powerful enemies at once. As I got closer to 50, though, the strength of standard monsters increased more sharply, and I started actually paying attention to my build and skills and rotation and such. Here are some technical notes that nobody will care about:
For gearing, I prioritize Will, Fate, and Vitality, preferably in that order. I've just been using quest reward stuff so far, not bothering with the auction house or crafted gear. One tough call to make is when to trade in a matched set with lower Armor but extra set abilities for higher-level pieces with higher armor. Right now I'm still wearing the Fem gear at level 38, but will probably start swapping that out for level 50 Unique pieces.

Let's talk story, shall we? 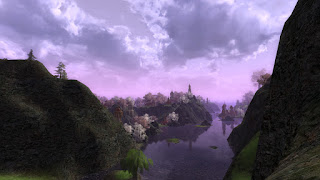 First, a meta observation. MMOs like this are really broad. One of their greatest strengths is how non-linear they are. You're encouraged to explore, to figure out what part of the game is most enjoyable for you, and then focus on that. You might race ahead to a particular area or follow a specific plot line closely, and return to earlier ideas later or not at all. In some ways, they come closest of all RPGs to recreating the feel of a classic pen-and-paper RPG: there are very few restrictions on what your character can do. (Sadly, you are still usually very constrained on how to do something - any given quest will only have a single solution - but you have nearly boundless freedom in choosing what to do.)

That's great so far as it goes, but it does mean that in the eternal struggle between Elder Scrolls-style breadth and Dragon Age-style depth, LotRO tends more towards the former. The specific problem that I kept running into is that there are just so many characters. Easily hundreds of NPCs with speaking parts, probably thousands. The vast majority of them serve purely mechanical purposes: they'll stand in an area, give you quests while you're at a particular level, and then you'll never speak with them again. A few of them tie into longer-running and more important plot arcs. Unfortunately, though, it may be weeks between the time you first see a character and when they pop back up again, because you were too busy trying to catch rare fish off the docks in Celondim to follow the epic quest. And even if you just saw them the day before, the graphical character limitations make it really difficult to distinguish particular NPCs. 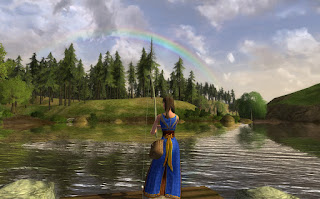 For example, later in the game, the Rangers of the North become rather important. There are multiple Rangers. However, they're all men who wear long green hooded cloaks, so their in-game models look the same. And we don't get strong, personality-conveying 2D portraits like you would see in Baldur's Gate or Neverwinter Nights or Shadowrun Returns: there's a procedural portrait based on their 3D character model, and while these can have many technical variations, they don't differentiate as clearly from one another. Plus, for better and for worse there's very limited voice acting, so you can't necessarily tell them apart via audio, either.

All that to say: the story feels really cool, and individual parts of it seem exciting and lore-friendly and everything, but I often felt a bit lost. I'd be standing in the middle of some huge, climactic, epic confrontation, wondering ".... who are you again, exactly?" Of course, a quick trip to the Wiki will clear things up, but that makes me even more impressed at the people who played this game at launch: they didn't just need to play under a more difficult curve with slower progression and more grinding, but that also meant that they had to go for even longer between major story beats.

There's one particular part of the plot that sticks out in my mind, for slightly negative reasons but also because it's interesting and recent. That has to do with Lorniel, the daughter of Golodir, one of the many Rangers who I can't tell apart. 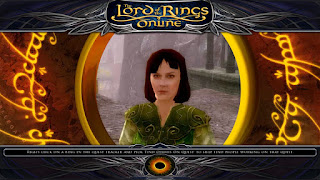 As I understand it (from my scattered memories and a few quick wiki searches), Golodir was a lieutenant of Aragorn who defied his leader's order to withdraw from the northern lands. Instead, he gathered a few other like-minded followers and vowed to bring the battle to Angmar. They went north, and then disappeared. Most of the other Rangers believe that he must have been killed, but Lorniel is convinced that he still lives and enlists you to find him.

Eventually, you and Lorniel track him down in Carn Dum. He was captured and is being held prisoner by Mordirith, the Steward of Angmar during the Witch-King's absence. Mordirith himself was once a King of Gondor who fought against Angmar, but was corrupted by Sauron and turned to evil. Mordirith could easily have killed Golodir, but he had more sinister plans. He has allowed you and Lorniel to "rescue" Golodir, only to brutally murder Lorniel before her father's eyes. Mordirith then allows Golodir to leave, content that he has sowed the seeds of despair and hate that will bring him over to the Enemy's side. 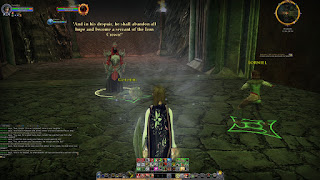 I winced at that part of the story - it's a pretty textbook case of the Women in Refrigerators trope which is widespread in popular culture, particularly in video games. I'd enjoyed adventuring with Lorniel and thought that she could be a cool character in her own right, but instead she is killed off to give the male character angst and motivation to take action.

That said, while that particular incident was unfortunate, it did help highlight how, in general, LotRO is actually refreshing in its portrayal of women. Throughout the game you're just as likely to find women in charge of military outposts, leading villages or fighting orcs as you are to find men doing the same thing. And unlike a lot of video games, they're not stuffed into chainmail bikinis or skintight bodysuits or other highly sexualized clothing. They're equal partners in the struggle against Sauron, visually distinct and appealing but not objectified or marginalized. 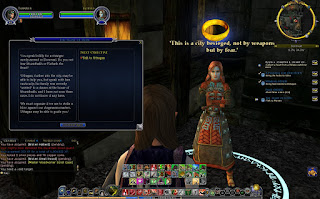 And, even the specific Lorniel case is far from the worst offender that I've seen. The story focuses on her relationship with Golodir, not with you; it's not so much a hacky way to motivate the player as a somewhat lazy source of dramatic tension. And I'm holding out hope that the game will ultimately subvert the trope. Usually, these sorts of plots are rolled out to give an antihero protagonist carte blanche to perform all sorts of atrocities in the name of revenge. Given the values of the rest of the game, though, I wouldn't be surprised if Golodir ultimately finds redemption not through acts of vengeance but through acts of compassion.

So, while the plot's particulars may seem fuzzy and indistinct at times, I still unreservedly love it, because of how well it maintains Tolkien's flavor and a wonderful sense of moral centeredness. There's a beautiful line at one point in the game, when your character is standing on the ramparts of the ruins of Annuminas and gazes out at Lake Evendim: "Though all before you looks grim, hope shines in the distance." That's one of the most perfect distillations of Tolkien's literary style and philosophy that I've read. 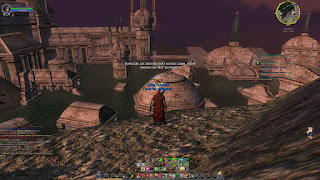 Much of the Middle-earth writings, from the Silmarillion through Lord of the Rings, deals with the importance of hope. When the world turns dark and dangerous and ugly and scary, it's more important than ever for individuals to maintain true to their best selves, to act faithfully towards one another, to show mercy upon their enemies, to act humbly and accept grace. We must set our standards even higher when faced with adversity, not descend into the muck.

That's a rare outlook, and one that's almost completely missing from the world of video games. It's delightful to see it captured and expressed so well in Lord of the Rings Online.

n.b. I have of course - of course! - continued to take a ridiculous number of screenshots. This covers levels 44 to 49, mostly in Angmar but with a lot of time spent having fun with Summer Festival activities.
Posted by Christopher Charles Horatio Xavier King III, Esq. at 4:41 PM