This is probably the longest consecutive run I’ve taken at Lord of the Rings Online, and probably my last run for a while. I continue to appreciate the scenery, themes, and lore, but the actual gameplay has hit a pretty rough patch, and it’s time to recharge my tolerance for tedious quests. 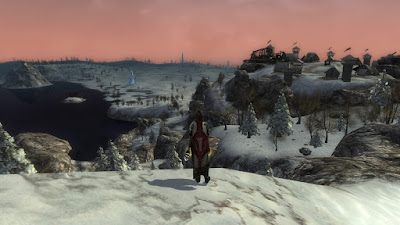 I think my last post covered up to through the end of the Rise of Isengard expansion, so this one covers the entirety of Riders of Rohan, as well as the Wildermore region. One obvious difference from the Isengard plot is a change of companions. The previous epic storyline focused on the Grey Company, a group of Dunedain Rangers heading south to unite with Aragorn and assist his quest. Things do not go as planned, and much of the fun of that plot dealt with the unexpected changes in the Rangers’ circumstances and fortunes. For better or worse, the Grey Company is very large, with about a dozen named individuals, and I always had a hard time keeping their various personalities straight.

Riders of Rohan shifts to a new and smaller party, which definitely helps as it’s easier to keep track of the individuals. Nona is a link to the earlier expansion: a Dunlending warrior, you met her in Galtrev with the Company and helped uncover the mystery of her brother Wadu’s passing. She steps into a larger and more rewarding role in Rohan. Early on you meet Horn, a Rohirric bard who was banished from Edoras for his songs criticizing Grima Wormtongue; he helps Nona find healing after she is stabbed with a Morgul blade, and is instrumental in assisting your party as you navigate the culture and politics of Rohan. Corudan is an elf who joins your group on Lorien and tags along… just for the fun of it, I guess? He seems much less invested in the plot than the other two, but has really good cheer and is always welcome. 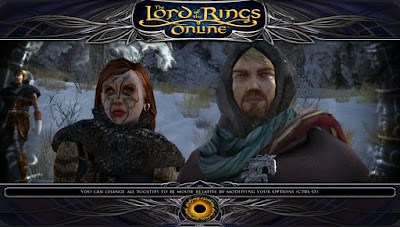 Your party is following essentially the same path as Aragorn, Gimli and Legolas after the Breaking of the Fellowship (which is revealed in some pretty cool and narratively interesting Rashoman-esque flashbacks). You track Pippin and Merry via the orc party that captured them, eventually finding the site where Eomer’s war-band defeated the monsters. After this, you’re more or less on your own, narratively… a relatively short trip into Fangorn reveals that the hobbits are alive, well, and in the company of the ents. The bulk of your time, though, is spent in the Riddermark, visiting various towns and cities and assisting them. The country is in rough shape, facing an external threat but with a respected king who refuses to take action against it. 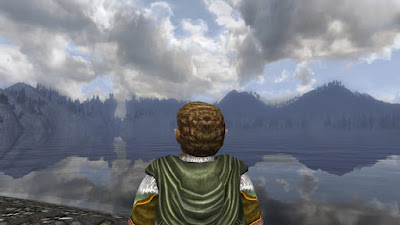 RoR is the darkest storyline yet in LOTRO, continuing the gradual slide towards despair that we’ve been experiencing ever since leaving the Shire. War has now come, and we see its evidence all around us: villages are burnt, soldiers and civilians slain, crops destroyed, refugees huddled on the road. The story really excels, though, in the detailed attention it pays to loss. You can visit a grave where villagers are buried - dozens of them! - and learn about each one. Who they were, what they wanted in life, what they were doing, how they died, who mourns them. 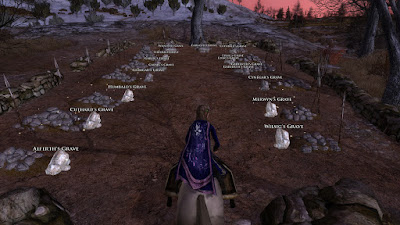 It becomes clear that this isn’t a story about valiant heroes triumphing over villainous heroes. It’s a story of grief, of loss, of mourning. You can defeat the bad guys, but that doesn’t restore what’s been lost. Once again, Turbine does a fantastic job at grokking Tolkien’s essential essence. The goal isn’t to amass power and destroy a threat. It’s to maintain your spirit: remain hopeful in the face of overwhelming terror and malice, and be receptive to unexpected grace when it appears.

While I really dig the story, though, the actual minute-by-minute gameplay has been grating for a while. Most MMORPG quests are very repetitive - travel here, kill X enemies, click on these objects, return here - and the Rohan quests aren’t as good at disguising their same-ness as the quests in earlier regions. (As a counterpoint to the above, though, they DO start introducing some interesting branching plot lines and choice - absolutely nothing in comparison to a BioWare game, but it still seems like a significant departure to everything else earlier in the game. Refreshingly, these aren’t matters of “Will you do the good thing or the evil thing?" Instead, you might need to choose between honesty and love, or between caution and valor.) 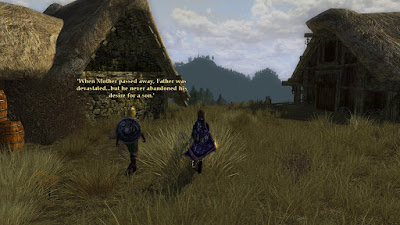 The big hurdle for me, though, was the pure tedium of actually completing those quests. For me, LOTRO has been defined by its gorgeous settings. Even when you are killing 10 swamp rats, you’re doing it in a beautiful area. In Wildermore, though, the you need to travel through unnavigable terrain, sidetracking around long sheer cliffs that aren’t depicted on your map, while moving through dense thickets of hostile enemies, and all this often while in deep forest that doesn’t even let you look at pretty scenery while doing so. I do generally appreciate how each area of LOTRO looks distinct and unlike anything that had come before, but in this case, I really wish that they hadn’t done such a good job at crafting a hostile land. 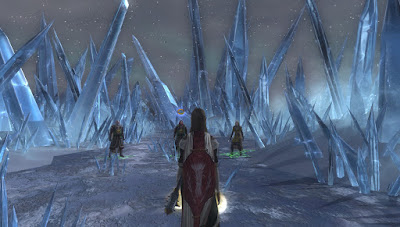 While I feel some short-term frustration, though, my long-term heart still burns for LOTRO, and I’m confident I’ll return sooner or later. From some peeking around online, it sounds like the Helm’s Deep expansion may bring annoyances of its own (Big Battles, much like Mounted Combat, seems like another innovative idea that doesn’t really succeed), but beyond that lies Gondor, which seems prettier and more fun. It’s also exciting to see, big-picture, how the game is coming along: the latest update brings the action all the way to the Black Gates of Mordor, along with some other nice upgrades like new premium player housing on the Bay of Belfalas, and there are rumors of a proper expansion in the near future, which most likely would cover Mordor, maybe including Mount Doom or even Barad-Dur. And beyond that? Some rumblings of Erebor and the Scouring of the Shire. Tolkien created an enormous world, one that I could happily spent my entire life exploring.

So, here’s my latest album of screenshots, covering most of Riders of Rohan and the Wildermore region, along with a few odds and ends in Moria. Middle-earth is still very pretty!
Posted by Christopher Charles Horatio Xavier King III, Esq. at 8:28 PM