Part twenty-five in a weekly(α) devlog.

This is alpha content, features may not be present in the final version.

There shouldn't be any plot spoilers in these posts, but there will be occasional discussions related to characters, locations, mechanics, and other aspects of my potential upcoming Shadowrun campaign (titled "CalFree in Chains"). You may wish to skip them if you'd like to be completely surprised.

Alpha testing is underway and going fairly smoothly so far. I'd attempted something similar back on Caldecott that never went anywhere, so this time around I was more proactive at recruiting new testers. I dropped a couple of messages in the main Caldecott discussion so that some of the most-engaged players would know about it, and also made a post in the r/shadowrunreturns subreddit.

About a half-dozen players have jumped on the campaign, sharing their bugs and general feedback, which is awesome! They've already found a couple of potentially nasty bugs, things that are easy for me to fix but would cause a lot of pain for players. There are also a lot of great little notes related to polishing that help contribute to a stronger game.

There are basically three different types of testing happening simultaneously, each of which is doing something different and useful.


I finished my initial run-through a few weeks ago, took a break during HadesScorn's run to let things refresh, and now have jumped back in again. My first game was as a cybered female dwarf adept, this time around I'm testing a human male decker. I'm trying to hit some of the more obscure / less popular routes in this play-through, and already have found some good bugs that I overlooked the first time.

This is really time-consuming. From a practical perspective, I could probably fix, I dunno, a hundred bugs in the time it takes me to do a full end-to-end playthrough of the game. But it's also essential, because I'm the only person in the world who knows what's supposed to be in the game. If a side-quest fails to fire, or a contingent NPC fails to show up, nobody else will notice that anything is missing. (Players will know if the wrong thing happens, or if something happens that shouldn't have, but have no way of knowing when something doesn't happen that should have.)

In Caldecott, I didn't do my second full play-through until several months after it was released, and was mortified by the stuff that I'd found. Granted, the mistakes weren't major enough for players to raise a ruckus, but still, since so many players first come to a campaign in the window after its release, I'd really wished that I'd caught them before. I'm hoping to finish this play-through by the 20th so I can wrap all of those fixes in with the release.

While testing, I typically run Shadowrun in windowed mode and have the editor open to the scene I'm currently in. If I spot a typo or similar low-risk bug, I'll just fix it immediately. If it's more complex, I'll add it to my bug list. After completing the scene, I'll save the game, then shift back into debug mode, making my fix and thoroughly testing it.


HadesScorn is a very thorough tester. Most players report on things that are going wrong, but HadesScorn provides more details about what is happening in the game, choices being made, emotional reactions to various events, and so on. I wouldn't be able to process this level of feedback from all of my players, but it is incredibly helpful to have one outside perspective with this much depth. Besides revealing a ton of bugs, this also indicates where things are confusing, or frustrating, or otherwise need tweaking.

HadesScorn writes notes in longhand on paper while testing, then transcribes them into a shared Google Doc, taking a semi-narrative structure. I can follow these notes and quickly recreate the relevant events in the game as well as track which branching paths are being followed. Instead of editing the doc, I'll use comments for questions or feedback, which will sometimes result in side-discussions. Stuff that needs a deeper look will be transferred over to my main bug list, otherwise I'll resolve comments in the doc as issues are addressed. 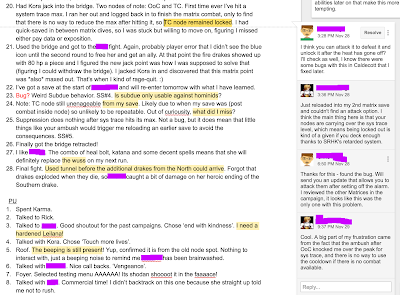 This is supplemented by debriefing phone calls, going over items in more detail and occasionally brainstorming solutions (in addition to more important discussions about the Arrowverse and foreign policy and the relative merits of Pathfinder). Again, this wouldn't be feasible with a larger group of people, but the two of us have very simpatico outlooks on RPGs and life in general, so this kind of feedback is invaluable as well.


In some ways, this is kind of like a dry run of the actual release. I publish the content to the workshop, then quickly jump onto the Steam page and switch its visibility from "Public" to "Friends-only". This ensures that the Alpha Test Squad can freely access it while the general populace cannot. That keeps the number of players under control, gives me sufficient time to respond to new bugs as they arrive, and ensures that everyone who starts playing knows what they're signing up for (basically, a lot of bugs).

The actual bug-reporting and fixing is similar to my normal process, but on steroids. I wrote up a quick note on Steam describing the test process and what I'm looking for, as well as my standard threads for collecting bug reports. People drop in notes as they encounter issues, I may ask them for clarifying info if I need it, then I jump in to reproduce and fix. 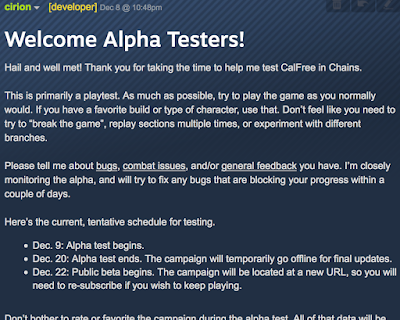 I've always released a lot of updates in the early phase of a release. There are many bugs during this period, and also many players, most of whom are highly motivated. I don't want to leave them spinning their wheels or all running into the same problem, so I try to push things out ASAP, even when it means multiple releases a day. (This is also why I exclusively support Steam in the early phase of a release. Steam automatically pushes out updates to all subscribers, so it's perfect for fast iterations like this.) 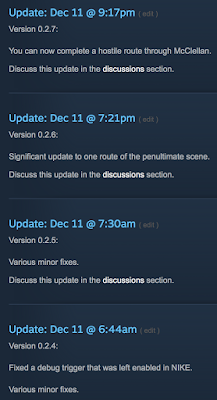 I initially wasn't planning on writing release notes during the private alpha, because of how many updates there are and the fact that this is all pretty transient. But they're easy enough to do, so I'm doing them after all, just not quite as detailed as I will do once I get to the public beta.

The Road From Here


Less than one week until my planned release! I still might hold this back if critical issues bubble up, but so far it's been a relatively smooth and encouraging test period. To me, this game is 2017, and it feels right to release it before the end of the year. I'm sure that I'll continue patching and supporting it in the new year, but I'm also hoping that I can sort of mentally put it behind me, and focus on a brighter future rather than the pains of the past.

Oh! Almost forgot, I took a quickie video of finished gameplay. This is from the start of the Sacramento scene, which I've discussed in a few previous posts.