I know that China Miéville has been around for a while, but he feels like a new author to me since I've only recently started reading him and he has such a unique vision. He's very much in the camp of people who I need to pace. Not so much because I enjoy his stuff and want to make it last (although that is true), but because it can be extremely dark and disorienting, and I'm reluctant to let it affect my mood too much. 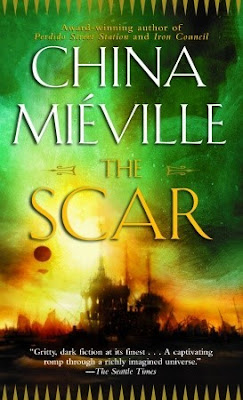 The Scar is less extreme in this regard than Perdido Street Station. It's still a dangerous world with bizarre creatures, but it doesn't have the same omnipresent sense of decay that the prior book did. It's at least ostensibly more upbeat, with a twisted kind of adventure driving the action and regular changes of scenery. Over time, some scenes of macabre horror creep in, but here they feel more like visitors to the story, rather than a revelation of the truth underlying existence.

Reading this book, I did start to feel like Failbetter Games maybe should owe some sort of royalties to Mr. Miéville. Not that they're ripping him off, but there are a lot of parallels. I'd earlier noted the connections between Fallen London and Perdido Street Station, and their respective sequels seem to share a similar amount. The description of Armada was awe-inspiring, and also very reminiscent of the Khan's Shadow port. The Sorghum and the other rigs reminded me of Station III, the Iron & Misery Funging Station, and similar industrial ventures. The trip to Salkikraltor involves procedures like those I undertook when visiting the Fathomking's Hold, and so on. And this is all on top of the similar sense of constantly suppressed dread, that some sinister creatures are lurking in the depths, ready to destroy the fragile contrivance temporarily suspending you above the waves.

All of which is to say, I'm now wondering whether the third novel in this series will involve spaceflight!

On the whole, I think I liked The Scar more than Perdido Street Station, mainly on the strength of its characters. Bellis is fantastic. She anchors the story; she isn't the only POV character, but drives by far the majority of the story. She's pretty thoroughly unsympathetic: she doesn't have much empathy, cares more about her own well-being than the misery of slaves living below her, is content to remain isolated in her small room rather than speak with other people, has a very transactional view of relationships. Yet, this limited personal character makes it all the more impactful when, late in the novel, she starts feeling remorse and regret for her actions: it makes the moral crisis more urgent and gives a larger sense of scale.

The supporting characters are almost all more likeable. Tanner Sack doesn't get all that much "screen time", but is the compassionate heart of the novel. I liked his back-and-forth evolution where he grows in a certain direction, encounters hardship, becomes fearful or avoidant, but then resumes towards his goal with a greater sense of purpose. Uther Doul is an intriguing enigma, mostly exposed through  exposition but with occasional glimpses at what might be the real man within. Even rarely-seen characters like Hedrigall and Bastard John become a part of Armada's framework: they may be gruff and antisocial, but they're also true believers in the freedom of the city and the chaotic system that uplifts it.

The very end of the novel becomes a bit of a shaggy dog story: they never do lay eyes on the Scar, we never learn what the Lovers intended to do with its power of potentiality. I was still satisfied with it, though. As I see it, this is the one universe that can make sense: in all the other ones where they entered the Scar, Bellis and her letter could never have returned. This way, at least we get a second-hand glimpse of what it offers.

The political dimension to the book was fascinating. I really dug the eventual inversion of the putative threat the Grindylow pose to New Crobuzon. I doubt that it was specifically intended as an allegory, but it's all too familiar to those who have seen America go forth and destroy in order to develop infrastructure and expand markets. Likewise, the maintenance of the Malarial Queendom as a sort of rump state protected by an external force felt oddly realistic.

Magic in this novel generally felt more vibrant and useful than in Perdido Street Station, where it was generally unreliable and costly. That said, we don't see much of it. I do really like the sense that magic (or thaumaturgy or whatever) is another branch of natural philosophy, something that people are studying and grasping in the same way that they are grasping principles of steam power and oil drilling.

This was a huge book, and I feel like I should say more about it, but I think that'll do me for now. This series continues to be a weird, dark, compelling place to visit, and each time I finish one of these books I'm grateful again to not live there.
Posted by Christopher Charles Horatio Xavier King III, Esq. at 7:43 PM