I've been cautiously dipping into China Mieville again. I'm always impressed at his books, but feel like I need to pace them: he's so good at building atmospheres of dread that I feel like I need to air out my mind for a while after finishing one of his stories. 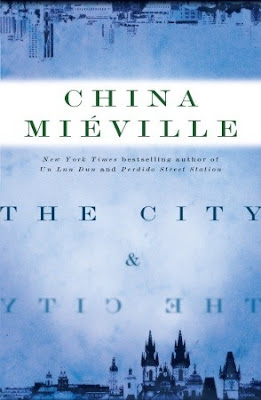 I was a little surprised, but pleased, so discover that The City & the City isn't as taxing as the New Crobuzon novels. It isn't exactly happy, but it feels a bit more sleek and a lot more modern. As I read it, my dominant thought was generally "Oooh, I wonder what'll happen next?" as opposed to "Oh no, what's going to happen next?"


The New Crobuzon books are set in another world, a kind of nightmare Discworld, but The City & the City is set in our world, probably around the present day. The characters use the Internet, quote Hollywood movies, seek to attract American investment dollars, and otherwise participate in the global world. The interesting difference is that the city itself, Besźel, doesn't exist in the real world. Based on the descriptions peppered through the novel, it seems to be a Balkan city-state, located on a coast (though it's unclear which one). Like a lot of the real-life nations in that area, it is relatively stable but economically disadvantaged, proud of its traditions, and trying to make its way in the world.

... I'm not sure whether to quality this as a "mega" spoiler because it's revealed very early in the book, but the reveal is so delicious that I'd hate to spoil it for anyone. The most distinctive feature of Besźel is something that the narrator and every other character takes for granted, and so we don't realize it for some time, even though it's surrounding everything in the story. Besźel has a counterpart city, named Ul Qoma, which occupies the same physical space but is completely separated.

My mind was somewhat primed for this idea because I've been simultaneously reading through Charles Stross's Merchant Princes series, which posits a series of alternate Earths that occupy the same space but diverging realities. I thought it was interesting and cool that Mieville was working with a similar concept, but to a very different effect, with a weightier noir detective story instead of an adventurous thriller. I started trying to unpack how the system here worked: unlike the Merchant Princes, Besźel is integrated into the real world, so does that mean that Ul Quoma is in an alternate dimension? How is its America different from Besźel's America? Can everyone cross over everywhere, or is there something unique about Besźel? And, given the huge economic implications to parallel worlds explored in the Merchant Princes, I started wondering how it would affect the world in this story. It seemed odd that it would end up so close to our own world with such a major difference.

As Inspector Tyador's investigation forces him to more closely consider Ul Quoma, I started entertaining a fanciful notion. "Heh... wouldn't it be funny if there WASN'T an alternate world? What if both Besźel and Ul Qoma are in our same world, and everyone just, like, pretends that they can't see each other? That would be amazing!" I held that idea in my mind for a good, I dunno, hundred pages or so until it slowly, gradually dawned on me that, yup, this is EXACTLY what the situation is. As far as everyone else on the planet is concerned, Besźel and Ul Qoma are one city with two odd and highly distinct cultures. For its citizens, though, these cities are (and must be!) entirely separate.

A very strong and multifaceted defense keeps the two apart. It consists of cultural taboos, social training, and the power of the state. We eventually learn how parents instruct their children from a very young age to "unsee" objects and people that belong to the rival city. Growing up in this culture, everyone gains an instinctive ability to recognize whether something belongs to one city or the other. A building's architecture, a person's clothing style or walking gait, species of plants: all of these are markers of being in one city or the other. Some areas are Besźel or Ul Qoma "in totality": an entire street might belong entirely to one city or the other. But many areas are "crosshatched", with Besź and Ul Qoman people operating side by side but forbidden to interact with each other.

As a reader, you sort of need to reverse-engineer the snippets you receive from Tyador to reconstruct what's actually happening. As an example: on a busy throughfare, both Besz and Ul Qoman cars might be sharing lanes. The Ul Qoman cars are sleeker and more modern, while the Besz cars are older and blockier, so everyone knows at a glance which city each belongs to. If you're Besz and another Besz car cuts you off, you might curse at the driver and flip him off. But if it's Ul Qoman, you must studiously ignore it; more importantly, the Ul Quoman driver would have given you a large berth to begin with so neither of you must interact with each other. And what if there's an emergency? Each city has its own police, each with its own type of siren. If an Ul Qoman siren starts to sound, all Ul Qoman cars immediately make way. The Besz cars shouldn't acknowledge the Ul Qoman car, but instead they will, seemingly entirely by coincidence and random chance, happen to open up a lane, while pretending that nothing happened.

Beyond the police, though, the ultimate authority overseeing this system is Breach, a shadowy yet omnipresent force that monitors all people in both cities looking for any sign of infraction, of seeing what should not be seen, and acting swiftly and mercilessly to resolve any breaches between the two. Breach is powerful, but has a limited porfolio: they don't care about crime or justice or policy in general, they only uphold the singular duty of keeping Besźel and Ul Qoma separated.

Once I realized that the "grosstopical" colocation of Besźel and Ul Qoma meant that they both physically existed on the same planet, it seemed like Breach was the one remaining fantastical element of this novel: they know when anything bad happens, appear immediately, and dispatch transgressors. By the very end of the novel, though, I started to wonder if they were, in fact, supernatural. It seems like much of Breach's power may come from socialization: children play at "Breach" from a young age and treat it with awe and deference, so the immediate obediance may be a result of that rather than mind-control powers. Likewise, it seems that many of their actual powers might be obscure but rational in origin: silenced guns for swift killing, chloroform to put minor transgressors to sleep, ubiquitous surveillance cameras and plainsclothes agents to maintain watch on suspect areas and people. (But, complicating this, there is some suggestion that the archeological artifacts of the progenitor city may actually have unique physical properties; if so, that "sufficiently advanced technology indistinguishable from magic" might have formed the kernel of Breach's initial establishment and power.)

Coming to the end of the novel, I started to wonder if it was intended as a metaphor or exploration of the kind of selective vision we city-dwellers acquire. Like the citizens of Besźel, we are trained from an early age to unsee: don't stare at that man on the sidewalk, don't engage with the person asking for money, don't look at what those people are doing in the alley. We build and maintain this fiction that those things aren't happening in our city. Of course, everyone around us knows that that thing is there, but they're all similarly ignoring it, and so we sort of construct this alternate agreed-upon reality that we implicitly choose to occupy.

And, it's the same from the other direction as well. Here in San Francisco, homeless people will greet one another and hold animated conversations, while ignoring the young professionals walking past them on the sidewalk. Different groups of people, grosstopically occupying the same physical space, but having an incredibly different experience of San Francisco and building up a culture of people who conform to their same viewpoint.

This isn't a radical idea, of course. Among other things, I was reminded of Infinite City, a great atlas from Rebecca Solnit depicting SF through a variety of lenses. I've spent much of the past decade in the Mission District and feel like I know it well; but the Mission District I know is a place of parks and trendy eateries and "dive" bars and music venues. There's another Mission District which is a sort of DMZ, an armistice between the Nortenos and Sureños: one of the maps in Infinite City shows the territory claimed by each at the time of its creation. I walk across those lines every day and never even think about it: it doesn't exist for me, and I don't exist for them. But if I had brown skin, then I would need to be aware of those lines and the colors I wore and all of the customs and consequences of that other city which occupies the same space.

Anyways! It's an interesting thought experiment. I have no idea if that was at all part of Mieville's intention in writing this. It seems like it might be... I dunno, too obvious or too pedestrian. He might have just been inventing for the fun of it, or had some deeper perspective that I haven't caught onto. Regardless, it's a really stirring idea.

Heh... after all that discussion, I haven't talked at all about the actual plot or characters! They're good. I like how the people, especially the narrator protagonist, are fully rooted in their world and roles. The plot is cool, maybe moving a little too swiftly at the end but still thrilling and clever. For me, though, it's the worldbuilding that's most impressive, and that's the part that will linger with me.
Posted by Christopher Charles Horatio Xavier King III, Esq. at 9:06 PM