Nothing But The Truth

And, we're done! Brother Cadwaller has completed his investigations into The Truth behind the stars, completing my fourth and final ambition in Sunless Skies. This seems like a good stopping point for the game, at least unless and until a major expansion drops. 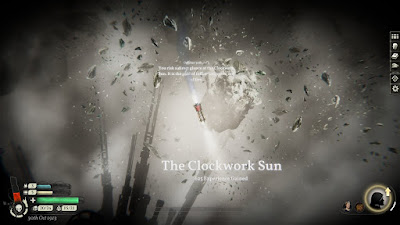 All told, this has been one of the most gripping games I've played in at least a year. As of now I've logged just north of 140 hours in the game; I'm sure at least some of that is idle time spent on the title screen, but for most of it I've been happily chugging through space and time. Sunless Skies has a perfect balance between core and fluff, with a really satisfying set of central mechanics (trade, combat, discoveries, resources, terror) and special-feeling one-time achievements (officer storylines, ambition plots, a few multi-station arcs). There's a lot to dig in to, plenty to master, and your increasingly strong grasp of the core allows you to eventually fly through the fluff at high velocity. 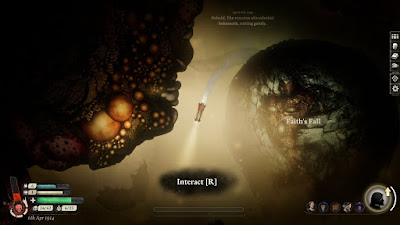 I did an initial "review" over two months ago (!) when first finishing the game. I think that pretty much all stands. A few additions and amendations to my prior statements: 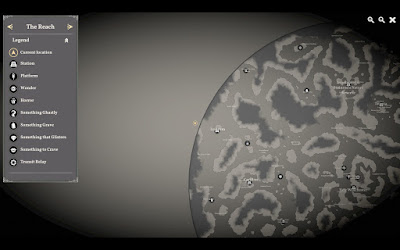 And, how about that story Ambition, huh? 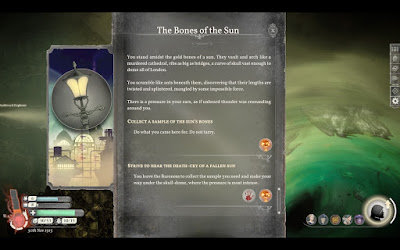 There's a lot of great lore here. Like the Martyr-King's Cup Ambition, it's mostly interested in the Stars/Judgments, the most powerful beings in the universe. Where the M-KC was primarily about a particular Judgment and the aftermath they created, The Truth is about the stars more broadly. You gain unusual insight into these beings higher on the Chain, what they do and how they behave. Almost as an afterthought, you also get some hugely fascinating insight into the fates of particular stars: what happened to the former sun of The Reach, say. 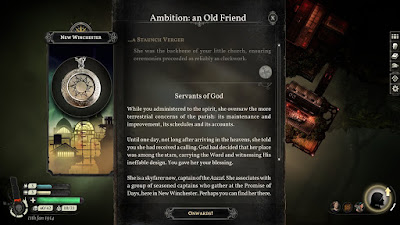 There is an almost incomprehensible gap between the concerns of lowly mortals and those of the stars. I was really impressed at how this vast story is made personal: while the overall arc will be the same for all characters, your specific connection to it varies based on your character's background. In my case, Brother Cadwaller was a former parish priest in Fallen London, and is led into the mystery of the stars through the Staunch Verger, a woman who helped care for his congregation. I'm pretty sure that different backgrounds each have their own appropriate connection: perhaps a former pupil or teacher if you are an academic, a comrade if you are a revolutionary, an officer if you were a zee-captain. The role this character plays can be the same in all cases, but having that bespoke aspect makes it feel really special.  Anyways, this is a really neat solution to a consistent challenge in RPGs, how to tell a big epic story that still feels personal and relevant. 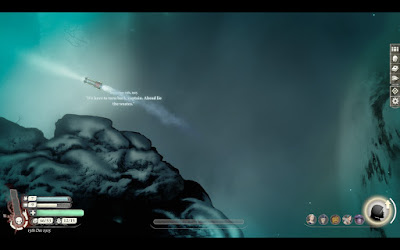 I'm now comfortable saying that Sunless Skies is a better game than Sunless Sea. It does lose a few compelling aspects of the prior title - the stately sensation of progress, the feeling of vastness. But it more than makes up for it by being more fun. There's more to do, less frustration, a wonderful sense of forward progress that still feels earned but not needlessly difficult. Life is maybe a little less dangerous and cheap in the skies than on the zee, but I ended up feeling more invested in my captains' progress, and feel more than ever like this is a world where I would be happy to hang my skyfarer's cap.