I really dig China Mieville, but he's one of those authors I need to space out. His books feel overwhelming, filled with morally and physically grotesque creatures and painful struggles. I adore them because they're so vast, deep, and weird, but they also are kind of exhausting. 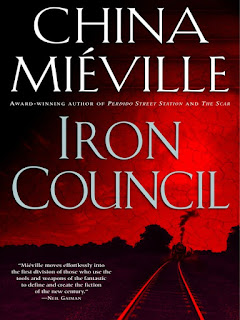 Iron Council is the third and (currently) final book in his Bas-Lag series. Where Perdido Street Station took place entirely within New Crobuzon and The Scar took place entirely away from it (albeit under the city-state's shadow), Iron Council splits its time, with several major plots underway inside the city but much of the action spent on the western part of the continent. It spends more time with many of the beings and characters we've heard about before: the bug-woman Khepri, the muscular and tall Cactae, the amphibian Vodyanoi, the powerful Mayor Stem-Fulcher. We hear brief references to or see fleeting glimpses of rarer people, such as the birdlike Garuda or the ominous Grindylow. One of the things I most like about this series, though, is how dynamic is continues to be: Mieville can seem almost bored with prior worldbuilding he has done and keeps pushing in newer and stranger elements. So we now meet the creepy Handlingers, witness the craft of creating golems, and learn the pantheon of Tesh.

I keep wanting to describe Bas-Lag as either fantasy or steampunk, but when you try to pin it down, it really is more modern than anything else. Other than cars, they seem capable of virtually all technology we have today. This is especially true in Iron Council, which focuses so much on an already-mature railroad industry, including its accompanying financial systems of capital markets and shareholders. They also have computing devices, autonomous robots, a commercial air-travel market, recorded audio, all sorts of twentieth-century tech. And that's all in addition to multiple traditions of magic, devils, possession, sentient alien races, and other hallmarks of fantasy. In the most abstract sense, Bas-Lag is not entirely dissimilar to the world of Shadowrun, especially when it's used to critique alienation and modern systems like capitalism.

The modern feeling extends to the characters as well. Early on we meet a troupe of experimental theater provocateurs, who to me encapsulate the thrust of the book. It's political and untraditional, thoughtful, but ultimately seems powerless. It gets a conversation going, throws powerful punches at foes, suggests a way forward, but does not produce any lasting change in the status quo.

The central character of the book is Judah Low, and I really like how the structure of the book only gradually reveals him. It would have been very simple and sensible to present the parts in chronological order, starting with Judah's youth, but I'm glad that Mieville delayed this introduction. By the time we finally meet Judah, he's been built up so much by his comrades' devotion, but there's a core of mystery about him. Then we meet him again and inherit that sense of his stature, which infuses his personal evolution with more drama.

Given the out-of-sequence narration, it's especially cool that so much of the book remains surprising. I'm thinking particularly of the reveal about just what the Iron Council is: we've been reading the name for hundreds of pages, and see it coming together for a hundred more, but I still felt a nice little shock once I finally connected the dots and realized what it was, where it came from, what it was doing.

As I've noted previously, reading Mieville always reminds me of Fallen London, as I belatedly recognize some of its influences. Reading the middle section of Iron Council made me smile a lot as I thought about Sunless Skies. I love the design and concept of Sunless Skies, but the central element of the game has always seemed so strange to me: why the heck are we on trains? There aren't any rails in the skies, so there doesn't seem to be much of a reason for us to be on locomotives as opposed to, say, ships or balloons or cars. Well, the one good reason is aesthetics, and it's a great reason. Anyways, I feel like reading Iron Council has given me some appreciation for how (albeit whimsically) this could work.

That visual image in the book is so stunning and wonderful and fanciful. The idea of a train becoming mobile, carrying its own track with it, traveling across the land, freed from the cords tethering it to the city. I love it.

I was semi-spoiled on this book in a very vague but decisive way. When reading reviews for The Scar, I came across one that said something like "The Scar is the only book of the three to have a mostly-happy ending", so I was prepared and steeled for bummer ending. Because of this, I didn't get my hopes up too high for the rising of the Collective or the return of the Council to New Crobuzon. It did end up a little more uplifting than I had anticipated, particularly with the end of the Council itself, a neat little trick that saves them from ignominious defeat while also denying them victory.

This did get me thinking, though, about how attenuated left-wingers' imaginative ambitions are. Mieville is famously leftist, and has some great portrayal here of working-class movements, but he denies them a chance to triumph. I've read a fair number of books over the last couple of years from left-leaning authors that portray heroic socialist or anarchist experiments, and I can't think of a single one that ends with a satisfying success for that movement. In LeGuin's The Dispossessed, the Anarrans' great social experiment is wracked by poverty, famine and starvation. Jack London's The Iron Heel is the most "rah-rah Socialism" book that I've ever read, and the protagonists of that book lose resoundingly, with every major character killed or driven into hiding and the Iron Heel ruling triumphantly for centuries. It seems like right-leaning authors are more comfortable showing their viewpoint ascendant: "And so he became king, and ruled well and wisely for the rest of his years." Why is it that left-leaning stories need to be satisfied with merely moral victories? (I'm definitely guilty of this as well! My own Shadowrun campaign ends with the anarcho-socialist People's University either forcibly suppressed and dissolved, or else co-opted by corporate interests.) It's definitely possible I'm just reading the wrong books, but it feels like there's... I dunno, some sort of defeatism or something that limits the possible outcomes.

I'm also ambivalent about the resolution of the Tesh plot... or, really, the plot itself. I think mostly this is due to my own confusion and curiosity more than any inherent issues. It feels so weirdly disconnected from the (to me) far more compelling storylines about the Collective and the Council and their struggles with the Militia. The Teshian plot has technically been a part of the book for a while, but seems to come from out of nowhere, and is simultaneously unthinkably vast and ephemeral, without the weight that accompanies other threats.

I've been thinking back over the Spiral Jacobs scenes, trying to suss out just who he is and what he's done. One possibility is that he just made it all up: forged a heliotype putting him in frame with Jack, came up with some convincing patter, and just ran with it. But I think it's more compelling to think that he actually is that old and has been around for that long. There are a couple of interesting possibilities that could flow from there. One: He is a very deep-cover very long-term sleeper agent, representing Tesh's interests in the city for decades, may have supported Jack in that capacity long ago, and has only recently started carrying out new policy in response to the war. Two: Maybe he was who he said he was, and is now something different. Particularly given his variable personality, I wonder if, say, a Teshian thaumaturge took over his mind at some point, perhaps leaving him on autopilot by default (wandering around, drawing spirals), and other times assuming direct control and actively subverting New Crobuzon. I don't know if there's any way in the text to figure out exactly what his deal was, but I think his character ends up seeming very different depending on your interpretation: tragic or villainous or mysterious.

I've long thought that the Bas-Lag books are, like, an ultradark version of Terry Pratchett's Discworld. It scans as fantasy, but is much more of a lens through which to view the modern world. The difference being that Mieville's books offer a uniquely dark and warped lens, but hey, that's part of what makes them so compelling! I don't know if he'll return to this particular setting in the future, but I'm looking forward to checking out his other books in the future; I think the most purely enjoyable book I've read from him so far is The City & The City, so he's definitely shown his chops working in different worlds.
Posted by Christopher Charles Horatio Xavier King III, Esq. at 7:52 PM