I rarely write about graphic novels on this blog. I'm not sure why, but it may be the same reason I don't often write about movies: they're usually much quicker to complete than novels or video games, and it feels odd to spend nearly as long writing about something as just experiencing the thing.

Anyways, I did think it would be worth spending at least a few paragraphs on the most recent graphic novel I've read: "Eugene V. Debs", an illustrated biography of the labor organizer and Socialist party leader from the early 20th century. I randomly saw the book while picking up another title from the library and it immediately grabbed my attention, as I've been meaning for some time to learn more about Eugene Debs. 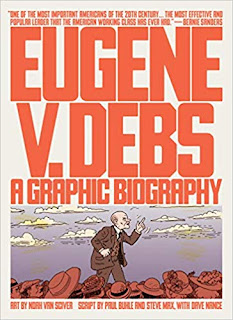 I first heard about Debs decades ago when reading nonfiction from Kurt Vonnegut. Vonnegut was a fellow Hoosier, and clearly had a strong affection for this fellow humanist. I've always been struck by the Debs quote I first heard through Vonnegut: "While there is a lower class, I am in it, while there is a criminal element, I am of it, and while there is a soul in prison, I am not free." He lived as he spoke, sacrificing his material goods to those with greater needs than him and serenely entering prison out of solidarity for others who had spoken out for peace and economic justice.

This book shows a refreshing link between America's movements for social and political reform, and its spiritual and religious traditions. That's something we don't think about much these days, but seems to have been particularly strong in the 19th century: the abolition of slavery, the move for temperance, and, yes, organizing the working class were all seen in spiritual as well as secular terms. For socialism, the individual soul is the most important thing in the world, and socialists recognize the common humanity of all mankind; it's necessarily in opposition to capitalism, which views mankind as a resource, a producing machine or a cost to maintain. Eugene Debs and his contemporaries frequently use touching and romantic language, as they are searching for beauty and not just justice; it's sweet to see how often flowers are presented and invoked, as something that is important and valuable in a way that can't be quantified by its usefulness.

The book is published by the Democratic Socialists of America, the resurgent leftist organization that has been energized by Bernie Sanders' two presidential candidacies. It's pretty text-heavy near the start, but most of the book is told with standard comic-style pictures. A few typed pages will summarize a period of Debs' life, then more pages of pictures will revisit that same era. 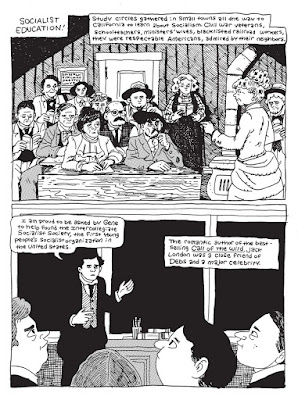 The subject matter is great, and I like the idea of a graphic novel as a, yes, democratic medium for communicating with a large and diverse audience. However, I ended up glazing over for some long stretches of the book. It can get pretty formulaic, with panels featuring a single character addressing the reader who says "I'm [X] and I say that [Y]!" Or you get a labeled arrow pointing at, say, Cesar Chavez, who never speaks, and never see any indication within the text of why he is important.

I think that the intention of this book is to be a sort of primer for the history of the socialist movement in America, which is also why the book extends long after Debs' death to show the continuity of Debs' organizing with what's happening in 2019; there is value in showing that long and rich tradition, which makes it clear that the struggle is bigger than any one person or moment. But narratively, I kind of feel like this book would have been more compelling as a more personal story focused on Debs and much fewer supporting characters; maybe focusing it around his trial, which is incredibly dramatic and also evokes his past work and his future candidacy.

The left is famous for infighting, as factions that are indistinguishable to the outside world face off as mortal enemies. Some of these schisms are presented more calmly here than I would have thought, like the rise of the Communist Party which eclipses some of the Socialist Party's early victories; there's also decent credit given to the Democratic Party in the 20th century as they bring into law some of the proposals championed by socialists. That said, the American Federation of Labor in particular is singled out as a constant villain in this story, which was also the case in Strike!. That's another dynamic I'd like to explore more; I'm still un-learning my prior belief that "labor" and "union" are synonymous terms, and tension or outright opposition between the two is a really intriguing concept.
Posted by Christopher Charles Horatio Xavier King III, Esq. at 8:50 PM