I forget now exactly how Gideon the Ninth came to be on my radar - I think I first heard about it in a tweet from Felicia Day, and it immediately piqued my curiosity. Necromancers... in space?! How does that even work?! 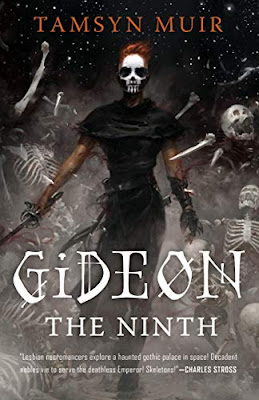 Very well, it turns out! It's a weird book on every level: very macabre setting and gruesome struggles, united with a fun and quippy narrative. Space ships and skeletons. Communicating over the radio or with undead spirits. Blasting your enemies apart with monstrous blood creatures, unless you're in outer space, in which case necromancy doesn't work, so then you'll need to use your rapier or a good old-fashioned laser rifle.

The world-building is really fascinating, but one of my favorite things is how little weight the book gives to it. This is almost entirely about the plot and characters, and so we only get occasional, intriguingly suggestive nuggets that suggest exactly how this empire of the undead works, and then immediately jump back into duels of honor and occult studies.

I'm not confident about this, but based on one almost-throwaway line, I have at least a speculative idea about why this is all happening. Suppose that Einstein is right and faster-than-light travel is impossible. How, then could we possibly ever visit and colonize other galaxies, which are tens of thousands of light years away? The traditional hard-sci-fi answer is something like a generation ship: build an interstellar ark, load it up with a genetically diverse population and replenishable supplies of food, water and air, set them off to their destination. One day their great-great-great-great-great-great-etc. grandchildren will arrive and set up house.

Suppose that, instead of all that, you instead sent some necromancers? Powerful undead lichs, who could stare into the void of space for an eternity? The original crew may wither and die, and then be raised again into immortal servitude, dragging their lifeless bones to and fro across the spaceship. Or they live on as zombies, their flesh wrapped tightly around their bodies, staggering on to their destination. Once they arrive, such a ship could deposit its dead, then raise them once more, restoring the first generation back to life and carry out the will of their dread lord.

Regardless of how this all got started: the system is now ruled by the Necrolord Prime, the God Emperor, the supreme source of all authority, in life and beyond the grave. Most of the book takes place during a sort of combination graduate seminar, haunted-house dare, and reality-game tournament to select the Emperor's new Lyctors, his highest-ranking lieutenants and powerful lords in their own rights. There is a little bit of a Hunger Games vibe to some of this, as the various participants react with curiosity or hostility to one another, creating informal alliances or rivalries; but it's a lot more diverse and less structured than the Hunger Games, with a big age range and not as strong of a "there can only be one" vibe.

The main protagonist, the eponymous Gideon the Ninth, is definitely my favorite, thanks mostly to her voice: I laughed a lot while reading this book, particularly in the earlier sections. Her backtalk is next-level, her running commentary delightfully sarcastic, her quips are quick and dead-on. The dialogue is very contemporary, and I'm not sure if it will age all that well - this is the sort of book where the necromancer's cavalier mutters "That's what she said!" under her breath multiple times - but it feels very fresh and vital now, and that's what matters. I was a little concerned when Gideon took her "vow of silence," but fortunately we're still privy to her inner dialogue, which is just as great as her outer one.

The book seems to slightly shift genre as it goes along, making it hard to categorize, but by the back half or so it settles into being a really satisfying whodunit murder mystery. I really enjoyed how this all played out, with lots of clues and suspicion and betrayals. There are a couple of revelations that depend on information you don't know in advance, but nothing felt unrealistic, at least given the bounds of the bizarre world we're inhabiting.

I was kind of surprised that it ends up being as happy of an ending as it does. I mean, yeah, almost everyone dies, but the Emperor turns out to be a really nice guy, and things turn out well for Harrow and Gideon, all things considered. Up until the end I was prepared for it to turn out that, say, the whole thing was a ruse to kill off the Houses, or that Harrow was the main villain, or that the challenges had been infiltrated and subverted by an enemy or something.

I don't know where else to put this, so I'll say it here: most of the blurbs promoting the book make note that these are particularly lesbian space necromancers. That is compelling, but overstates things somewhat: Gideon as the primary narrator does have an eye for the pretty ladies in her vicinity, but never really acts on anything. Emotions are high, meaningful glances are exchanged, but everything is very chaste through to the end. Which is fine, of course! It's still a cool and vital perspective, and ends up being less seedy than one might suspect.

The book is nicely self-contained and stands on its own, but I was pleased to see at the very end that it's actually the first entry in a planned trilogy. The writing style here is so fun that I already hunger for more, and those tantalizing morsels of backstory leave many possibilities for the plot to continue. It seems like this is the first book by the author Tamsyn Muir, which makes me all the more impressed at how ambitious and satisfying it is. I look forward to reading many more!
Posted by Christopher Charles Horatio Xavier King III, Esq. at 9:42 PM