I haven't done one of these in a while, but this is just a quick note that I'm in the Early Access of Baldur's Gate 3! I'm pretty impressed by the little I've seen so far. 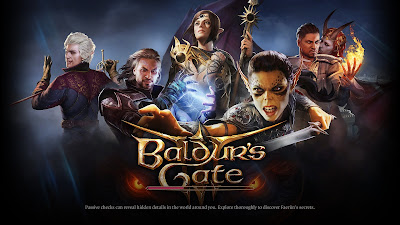 As a general policy, I almost always eschew Early Access for games. I think the last EA I played was Sunless Sea six years ago. My usual philosophy is that I only get one chance to play a game for the first time, and I'd like that first time to be as smooth and polished and bug-free as possible.

So why am I in EA for this? Well, BG2 is possibly my favorite game of all time (with the possible exception of Fall from Heaven 2). BG3 isn't made by BioWare; but the old late-90s BioWare doesn't exist anymore anyways. Instead, it's made by Larian Studios, who have made some of my favorite recent RPGs, including the absolutely fantastic Divinity Original Sin 2. Those two factors give me a lot more confidence than a lot of EA games do. The final deciding factor for me was that playing early would hopefully help me avoid any potential story spoilers floating around the Internet and experience it first-hand myself.

I'm just a couple of hours of playtime into it so far, so this definitely isn't a review, but some initial first impressions: 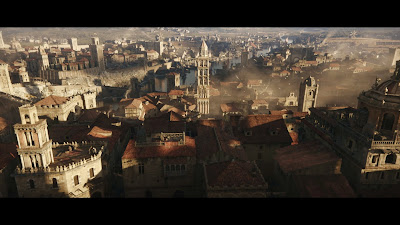 It is definitely taxing my system. I last upgraded my PC for Dragon Age 3, which coincidentally was also about 6 years ago. The GTX 970 I got then has served me very well for years, smoothly running The Witcher 3 and other higher-end games, but it's chugging for this one. I may manually adjust my settings down to try and get a smoother experience here. But I've been thinking for a while that I'll probably need an upgrade for Cyberpunk 2077 anyways, so I might start researching a new build sooner rather than later.

The impression I've gotten so far from the few previews I've seen is that this game looks like Dragon Age: Origins, and that's been borne out so far. Particularly the conversations and cinematics fit that mold: your protagonist is voiceless in dialogue (but has reactions outside it), and there's a nice level of zoomed-in detail that I associate with that game. Actual gameplay feels a lot like the DOS games, particularly movement, item interaction and looting. It's missing telekinesis, which I think helps this game feel much more grounded than the DOS games. And it still has the environmental effects as DOS, but at least so far they're less of a focus. On the other hand, it doesn't really remind me much of BG1/BG2, at least so far. Which is honestly OK. It would probably be worse for someone trying and failing to replicate it than to focus on making their own new thing good. 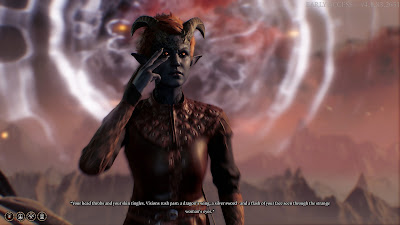 Character creation is awesome. One sign of a good RPG is that I burn most of my first night just on making my character. It's funny to me that I can make a better Qunari in BG3 than I could in DA3. Chargen uses slots instead of sliders, which I personally find a lot nicer and easier to use: you don't, like, adjust your brow width, you just pick what kind of head you want. 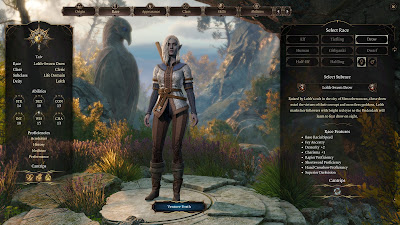 One of my perennial hobbyhorses is the presentation of gender in RPGs. RPGs are in a kind of awkward state now where you're forced to make a binary gender choice at the start of the game and play a cisgendered PC, but modern RPG worlds are increasingly filled with transgendered, nonbinary, or otherwise queer characters that your PC can meet and gawk at. The only studio that really does something cool with player gender is Failbetter Games, and they don't need to worry about 3D models or animation. At first blush, the BG3 creator is like all the others, starting with the fateful Venus-or-Mars toggle. But it's cool to see that this choice doesn't lock you out of anything! You can create a biological female with a masculine voice and a big bushy beard, or a hulking brute with lovely eyeshadow and long flowing hair. 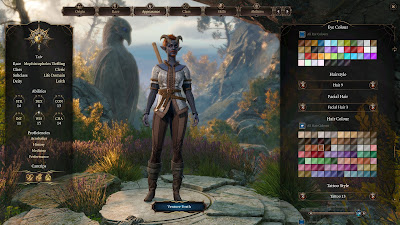 Oh, and that hair! I would have murdered a room full of people to have this many long-hair options in DA3. 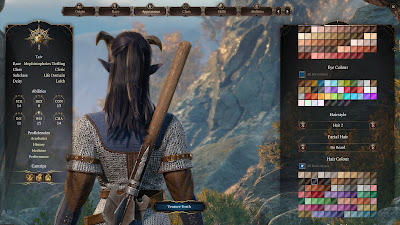 Anyways, I'm rolling with a normal (for me) cis character, but it's really cool to see this space opening up and developers allowing players a wider canvas to choose from in crafting their characters. 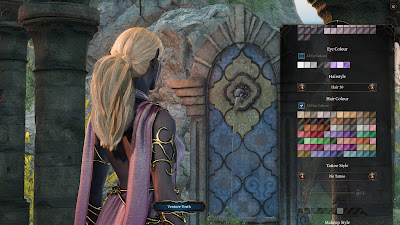 They are still in progress on adding classes. I think I want to play a Bard for my first full playthrough, but so far in EA I'm playing a Rogue and having a blast. I really love how many sub-classes and sub-races there are.

And... that will do it for now! I'll be very mindful of spoilers going forward, just wanted to share that I'm checking it out and having fun so far.