I've abandoned my Feverian run of Stellaris, thanks entirely to my own stupidity. The game had been going great: my "be nice or we'll beat you up" hegemony had absorbed every single empire in the galaxy shortly after 2300, and my empire was already researching future techs. I'd vassalized and absorbed a few other empires, was the sole Council member in the Galactic Community, terraformed all my planets into Gaia worlds. And then, like an idiot, I rivaled the Fallen Empires.

I think I was remembering my previous Pacifist game, where it was surprisingly hard to get the FEs to attack me, so I wanted to start preparing the groundwork early. And I was just starting to build Gateways, so Influence was in shorter supply than ever. But of course you can't choose when the FEs will attack you. Oddly enough, it wasn't the Fanatic Xenophobes, but rather the Fanatic Materialists who came after me. Their Fleet Power was maybe 25% or so higher than mine, and at first they did the trademark brain-dead FE thing and flew away in the exact opposite direction. But once I started attacking their bases they quickly returned and annihilated me, including my brand-new Juggernaut. Alas.

It would be interesting to keep it going and try to recover, but I decided to call it a game and try something else out. During a recent Steam sale during Paradox's annual convention, they offered big discounts across their entire catalog. I picked up a handful of other Stellaris DLCs I wanted, like Distant Stars and Ancient Relics; and I also grabbed Vampire: The Masquerade: Coteries of New York, which is by another studio called Draw Distance but published by Paradox. 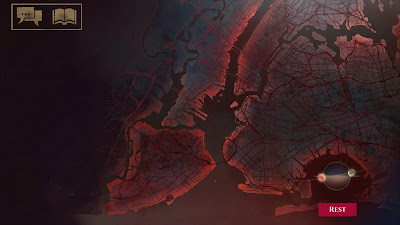 It was pretty big news a couple of years ago when Paradox acquired rights to the World of Darkness, which have languished since the demise of Troika. The big reveal was the proper sequel to Bloodlines, which I have been excited for and then alarmed about. But in addition to that big-budget game, Paradox has also been partnering with a surprisingly wide range of developers for lower-budget indie-esque takes on the property. I don't remember seeing an approach like that before; the closest analogue is probably Lucasfilm, making a bunch of Star Wars-themed games across a wide variety of genres and game types.

Coteries of New York was one of the (or perhaps the?) first games to come out under the new arrangement. At first blush, it looks a lot like a visual novel. It's very text-heavy, with no recorded dialogue. The vast majority of scenes show a single character standing in front of a background scene, delivering dialogue, and eventually culminating in a three-choice response from you. 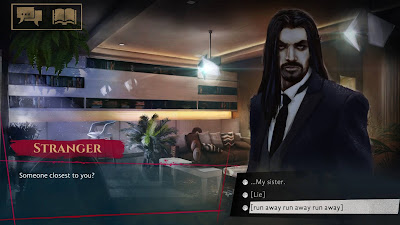 That said, the production values are a lot higher than you'd expect from a Ren'Py-type visual novel. The backgrounds in particular are fantastic. When looking at a map of New York City, the arterial streets pulse with blood. Flickering fluorescent lights battle against downpouring rain to illuminate a darkened storefront. Dancers jump and writhe in the background of a club. 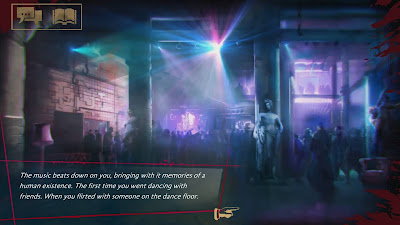 The visual design is also fantastic. The character designs are a real highlight, with the vampires looking brooding and magnetic. The city itself is wonderfully gritty; you're often just around the corner from some famous tourist spot, scraping up against the real hard edges of the city, with potholed streets and rusty drainpipes and overgrown bushes. 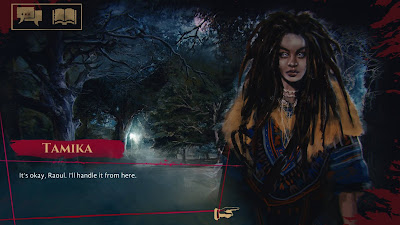 The overall writing and dialogue are really good. There are a handful of minor typos, and a couple of places where it seems like some lines are just skipped: you have to press "Continue" twice to advance, and then see a response without any prompt. But with so much text these minor hiccups don't really stand out. Each character has a nicely distinctive voice, recognizable motivations and personality. Almost all of the action in the game is communicated through text instead of visuals, and they do a great job at making you viscerally feel the punches and gunshots and metallic taste of blood thanks to the evocative writing.

Music is great in the game, with a mix of ambient tunes and background sound, but there are some inexplicable silent stretches in the game that made me miss it.

And the gameplay? Well, the introduction is a pure straight-up visual novel. There are lots of branching paths choose-your-own-adventure-style, but no real mechanics. Once you move into the main game, there's a bit more gameplay, but it's very light. The game really just has one mechanic, Hunger. Your Hunger increases slowly over time, and more rapidly if you take physical damage or use vampiric abilities like Presence or Fortitude. Hunger decreases when you feed on humans. I never saw what happens when Hunger gets too high, but presumably it's Very Bad. 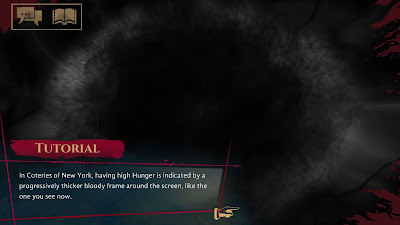 From what I can tell, you should pretty much always Feed whenever the game gives you the opportunity to do so; these chances just come up at predefined points during specific stories, so you can't seek them out when Hunger gets high. There are a few symbols that appear on Hunger-related options, and sometimes they are unavailable, which I think might mean you have too much or too little hunger? The symbols were honestly a bit annoying, they only tell you what they mean once and you can't look it up again later, either in-game or anywhere online. 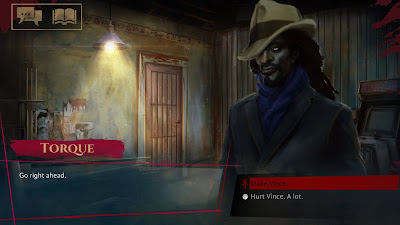 In practice, most Hunger-related situations feel like a wash. Using a vampiric power will increase Hunger while letting you avoid damage; not using the power will deal you damage and thus increase Hunger. If you Feed early in a mission, you'll probably face an encounter later that increases Hunger again. Not always, though! The game does generally make sense, and based on what you know about situations and characters, you might be able to navigate through a scenario without ever using a Power or getting injured.

All of this power and hunger and blood stuff lines up very well with my previous experiences in Vampire: The Masquerade: Bloodlines, and presumably with the original White Wolf pen-and-paper game. Overall the game feels very lore-friendly. Stuff is explained well in-game and aligns with the overall mythology and mood of V:TM. 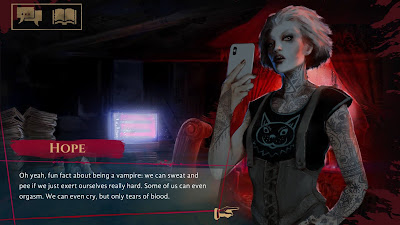 While hunger is the one mechanic, you do have a good amount of control over what your character does, mostly driven by mission selection. In the main part of the game, you can choose what to do each night. Most nights you can do two things, some nights only one. Usually a given subplot will have a slight pause between acts, forcing you to spread your attentions a bit instead of just following one line until its conclusion. 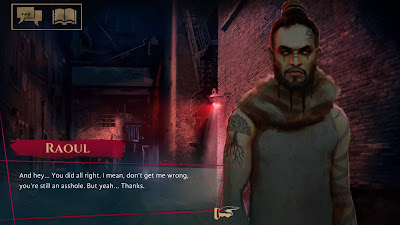 Unlike, say, the Shadowrun video games, you will only be able to do a limited number of sidequests during the course of the game. There are a limited number of nights, and the main plot automatically progresses on specific nights regardless of your actions. I think you're best off going "deep", picking a couple of specific stories and following them through to completion, rather than going "wide", starting a bunch of different stories. Which specific stories you follow don't seem to matter much, but at least one should probably involve recruiting coterie members.

Coteries of New York is good on the "choice" front, but not so good on the "consequences" side. For example, you can pick one of three characters to play as; but based on what I've seen after 1.5 playthroughs, the main part of the game is the game for all of them, with some relatively minor flavor text differences. You seem to have a lot of choices in how you progress through the introduction, but either you get railroaded into the same main plot or the game ends early. I was curious if your actions during that phase could cause you to become aligned with another faction, but it doesn't look like you can. 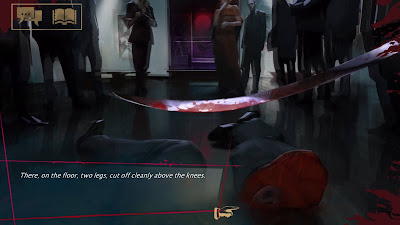 People do pay attention to how you treat them. For coterie members, that seems to affect whether they agree to join you or not. For other characters it affects their dialogue. Different people like different things and require particular approaches: for some people, you have to be really direct and project a tough image, while for others you have to be deferential and polite. 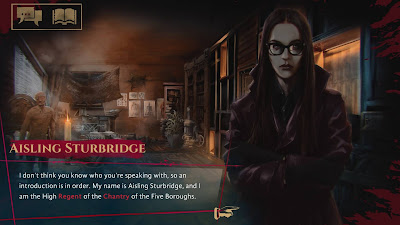 So, the game does track your words and actions, but that's the only thing it tracks. There aren't any items to collect or gear to upgrade or powers to learn or anything. It's all about relationships.

This seems like a prime example of a "buy it on sale" game. I feel kind of bad writing that, since I always say that I want shorter games, and at about five hours for a playthrough this is actually a pretty awesome length for me. But the actual ending, while very appropriate to the lore and mood of Vampire The Masquerade, feels unsatisfying. 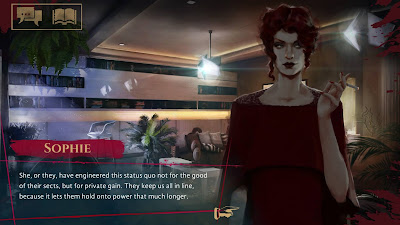 I was reminded in some ways of the Shadowrun games. In both universes, you are only a tiny insignificant pawn of far greater forces: the megacorps and the dragons of Shadowrun, or the ancient senior vampires and centuries-old traditions and societies of V:TM. I feel like the Shadowrun CRPGs do a good job at honoring this setting by emphasizing the impact you can make on a small slice of the world, even if you can't hope to change the status quo. In CoNY, you are left feeling like you had no agency or purpose at all, which is a much more deflating feeling for a player. (Though, granted, very much in line with my understanding of the tone of V:TM.)

As noted above, this game is on the short side and might be something to wishlist rather than purchase; I was really happy with it at $8, but I might have been more bummed at $20. If you really like vampires, though, this game delivers them in spades. 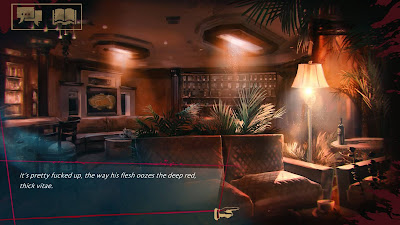 It's available on Steam for all computers, and on consoles, including the Switch. I actually feel like this would be an excellent game for mobile play: it's divided into nice short storytelling chunks, is text-heavy, and doesn't have any time-sensitive action gameplay. It would be great for commutes and plane flights now that we're doing those again. It's interesting to me that it isn't available for tablets or phones, since it isn't extremely technically advanced and seems like a great match for those devices.

While I didn't love this game, I did thoroughly enjoy it, and will be checking out the sequel once it's on sale too. Paradox has been publishing a bunch of World Of Darkness games, some of which seem to be even more text-heavy than this one. This seems to be a sensible direction for TTRPG adaptations, to try out a bunch of different projects with different partners aimed at different markets, rather than putting all of your eggs in one basket and hoping that a decade-long effort bears fruit.

In many ways, the visual novel (or text adventure!) adaptations seem to be closer to the experience of playing a pen-and-paper roleplaying game with a GM than a graphically-intensive first-person open-world game would be. It's all about imagination, and words can be incredibly evocative if we let them be.