I continue to get a better grasp of  Roberto Bolaño's books as I read more of them. After reading the first one, I was like, "This is what he writes like!" After reading a few more, I was like, "Wow, all of his books are so different from each other!" And now I'm like "Oh, but there's definitely some recurring stylistic choices and themes across most of these books!"

"Distant Star" is a particular case in that it's a retelling of an existing story. As he (or, well, his fictional narrator) notes in the introduction, this was previously published as the final installment of "Nazi Literature in the Americas". That story has now been extracted and retold as a stand-alone novella. It's been a while since I read NLitA, but most of this book felt familiar to me, and it's hard to remember what beats and scenes are new and which are from the original story. 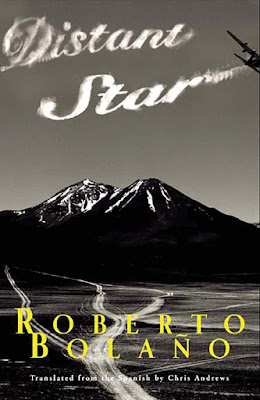 Looking back over my previous post, I see that the names of all the characters have changed: Carlos Wieder aka Alberto Ruiz-Tagle was previously Ramirez Hoffman aka Emilio Stevens. The narrator of the older work was named Bolaño, this one is anonymous. And reviewing that old post helped me solve another mystery about the sisters: here they're the Garimendi sisters, there they were the Venegas sisters. I'm not pretty sure that there's another pair of identical twin poets in another of his novels (probably The Savage Detectives?), which both of those stories have reminded me of.

I'm curious about the reason for and the meaning of changing these names, especially after specifically referencing NLitA in the introduction. In both novels, the narrator seems like a novelized version of Roberto: a student socialist poet imprisoned by the Pinochet regime, who later leaves the country and wanders Latin America before settling in coastal Spain. It makes me wonder if this story is adapted from his own experiences, or resonant with his thoughts about Chile under Pinochet. If so, the changing names may oddly be a way to emphasize the real-world inspiration: the original names would have been changed before publication, and changing them again highlights that.

This book reminds me that Bolaño's superpower as a writer is the use of absence. He has a fantastic ability to write around a subject, whether that's a person or an idea or an event or whatever. He creates all this stuff that kind of silently points back at this thing that looms off the page while the narration strides forward. It builds up to this wonderfully thick sense of dread: as in a thriller movie, the monster we can't see is far scarier than the one we can.

In this story, he sometimes builds that absence before finally tapping it, as with the long wind-up before finally seeing Carlos's photographs: by the time we see them we're convinced that they're horrifying, and then the narration can just kind of skim along the surface and move us along, leaving our minds to fill in the grisly details. But other parts of the book remain unfilled holes, like the final confrontation between the detective and Carlos, or the contents of the binder he finds, or the identity of the detective's client.

Of course, this leaves us free to speculate and tentatively advance our own theories. And actually, it lets the characters in the book do that too! The narrator wonders at one point whether Bibiano, who has found some middle-class success teaching at North American universities, is bankrolling the investigation; Robero gently but firmly points out that professors don't make anywhere near that amount of money. The narrator seems to assume that the client is a leftist who wants justice for the crimes Carlos committed, but personally I think it might be someone implicated in the crimes: an accomplice or supervisor or beneficiary under the dictatorship who now wants to tie off the loose end and ensure he (less likely she) doesn't need to fear an accusation and charge in the future, to keep the ghosts of the Chilean past buried.

As with lots of Bolaño's other writings, most explicitly in NLitA but also in By Night in Chile and The Savage Detectives, a big subtext is the responsibility of art and the links between art and artist. There's a digression near the end of Distant Star about "the barbaric writers", a far-right school that impels adherents to spend a week desecrating classic literature before emerging reborn into the world, purified and prepared to write unencumbered original work. Reading about these rituals is horrifying, but shouldn't we feel equally horrified by the racism and bigotry of the writers?

Carlos was, by all accounts, actually a very talented poet: but as I read the story, it seems like he was infiltrating the Concepción literary scene to identify socialists and target them in the upcoming purge. Could any of his darkness and malevolence be seen in his poems? I don't know. It doesn't seem like the smart and cultured people around him noticed anything. (Which is ironic, since he gave off the affect of not noticing the people around him.)

Should Carlos's (early) work be celebrated, knowing what he did? I want to say "No." Personally I'm feeling more adamant on this topic in a post-GamerGate, post-alt-right, post-Trump world than I might have been back when this book was written. Art is a wonderful and beautiful thing that we should cultivate and celebrate; and, also, the evil people do and the lives they can destroy vastly outweigh any value their work might have had. It seems best for the human race if we get in the habit of shunning the work of monsters, which fortunately seems to be the tentative trend of the times. Thankfully, there is no shortage of great work being created by non-monsters, and I don't think we'll be losing much as a culture if we consign the work of Carlos to the abyss and instead pay attention to Bibiano and Fat Marta.

I do enjoy seeing linkages between books, and I don't yet have a good enough bead on Roberto to describe exactly what he's doing. I don't think that it's a David Mitchell-esque shared universe; but there are lots of wonderful little holes connecting his books, most famously the passage in The Savage Detectives that gives the best explanation of the significance of 2666. How does Distant Star fit into all this? I don't know! But its existence - its double existence, its dual life under another name - does seem significant, and I'll keep pondering it.