The Hat That Did Not Quite Fit Him

One of several unexpected things to come out of my play-through of Disco Elysium was a fresh update to my reading list. The creator published an "Inspirations and Recommendations" guide that lists works in several media which had some influence on the unique world and game experience of Disco Elysium. Most of the books were new to me (other than China Mieville), and I've been feeling very eager for new experiences evocative of DE, so I got cracking. 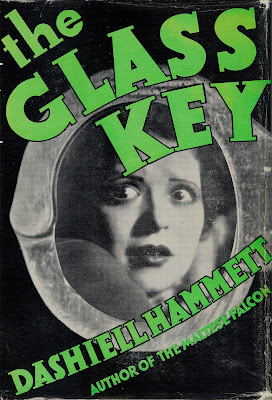 First up is The Glass Key, a hardboiled noir detective novel from Dashiell Hammett. I've heard of Hammett, of course, but haven't read him before; in fact, as I think about it I've come to realize that I probably haven't read any noir novels. That seems a bit surprising since I say that I like noir, but that's probably based on me really enjoying a tiny number of specific movies.

The Glass Key was an excellent read. A few things jumped out at me about it. First of all, all of the narration is very surface-level and completely focused on physical descriptions. The book tells us what a character says, how he walks, where he looks, when his breath grows labored, when his hand twitches. It never tells us what he's thinking. That doesn't mean that the character doesn't have an interior life or isn't mulling things over! But it means that we're always at least a step behind, trying to parse meaning out of behaviors and not only figure out what's going on but what the character thinks is going on.

Reading this book reminded me a lot of watching a movie. Of course, movies also are very focused on surface appearances and, bad voiceovers notwithstanding, tend to show what characters do and let us infer how they feel. This similarity extends down to the periodic phone calls, which put me in mind of a classic Bob Newhart routine: we only hear a single side of the conversation, with periodic ellipses elliding the other party's responses, and try to fill in the gaps ourselves.

The novel's protagonist is Ned Beaumont, a sort of antihero. I was never completely clear on exactly what his deal was, but he seems to have played a big but undefined part in assisting the rise of a corrupt political/criminal machine system run by Paul Madvig. The novel is set during Prohibition and Madvig oversees a network of speakeasies and crooked government contracts, backed up by bought-and-paid-for elected officials.

Very early on a murder occurs, with Ned finding the body, and I spent much of the novel wondering whether he was trying to solve the mystery or cover it up. Ned has a lot of history with Paul and other characters, so even when he's talking with them there's a lot that goes unsaid and is simply understood between them, but not to us the reader. Ned is really unusual: not a private detective or another "typical" noir role, but he does use his clout to obtain an official commission as an investigator for the DA's office... and then proceeds to use that commission to further his own private financial interests.

There's a pretty sizeable cast of characters: Ned is present in every scene, a few others like Paul and Jack appear fairly regularly, some play large roles for a short time, and a few make brief but memorable impressions before disappearing forever.

I mulled over the possible culprits quite a lot over the course of the book. One early favorite theory of mine was that Ned himself was the murderer: that scene starts with him standing over the corpse, and it seemed somewhat plausible that he had done the deed himself to protect Paul, with their subsequent vague conversations communicating this situation without saying it out loud. The nature of those conversations was actually more reversed, with Ned at least somewhat suspecting Paul of the crime. I did wonder if the senator had done it, or one of the women in Taylor's life. Ultimately we learn that the senator did it himself, but the revelation of his motivations was still pretty surprising to me.

The book ends on a somewhat brutal note, with Ned revealing to Paul that he isn't just leaving town and their relationship, but also leaving with Paul's crush Janet. As is usually the case in this sort of genre and era, I have a really hard time believing the romantic decisions of women; Ned seems like an old and beat-up and not particularly nice man, while Janet seems like she's about nineteen, beautiful, rich, smart and tenacious. (I recently re-watched Casablanca and have a similarly hard time picturing the young ingenue Ilsa falling for crusty old Rick; I do wonder if expectations and standards were very different back then, or if it's a sort of fantasy built into these stories or what.) The last few sentences are kind of crushing, ending the book as a whole on a decidedly melancholy note.

The Glass Key was a pretty perfect book for my renewed public transit commuting lifestyle: short, punchy, intriguing without being overly complex, vivid and exciting. I can see why Robert Kurvitz likes it so much: it isn't directly evocative of Disco Elysium, but you can see how some bits of its DNA made its way into parts of the game.