The Telltale Games version of The Walking Dead was my personal favorite game of the year, and I was encouraged to hear similarly positive things about The Wolf Among Us this year. Like TWD, TWAU is based on a popular and long-running comic book series, in this case Fables. I read much of Fables a few years ago and had generally positive but somewhat mixed feelings about it; given how much TWD exceeded the quality of its source material, though, I had high hopes that TWAU would similarly rise above the comics. 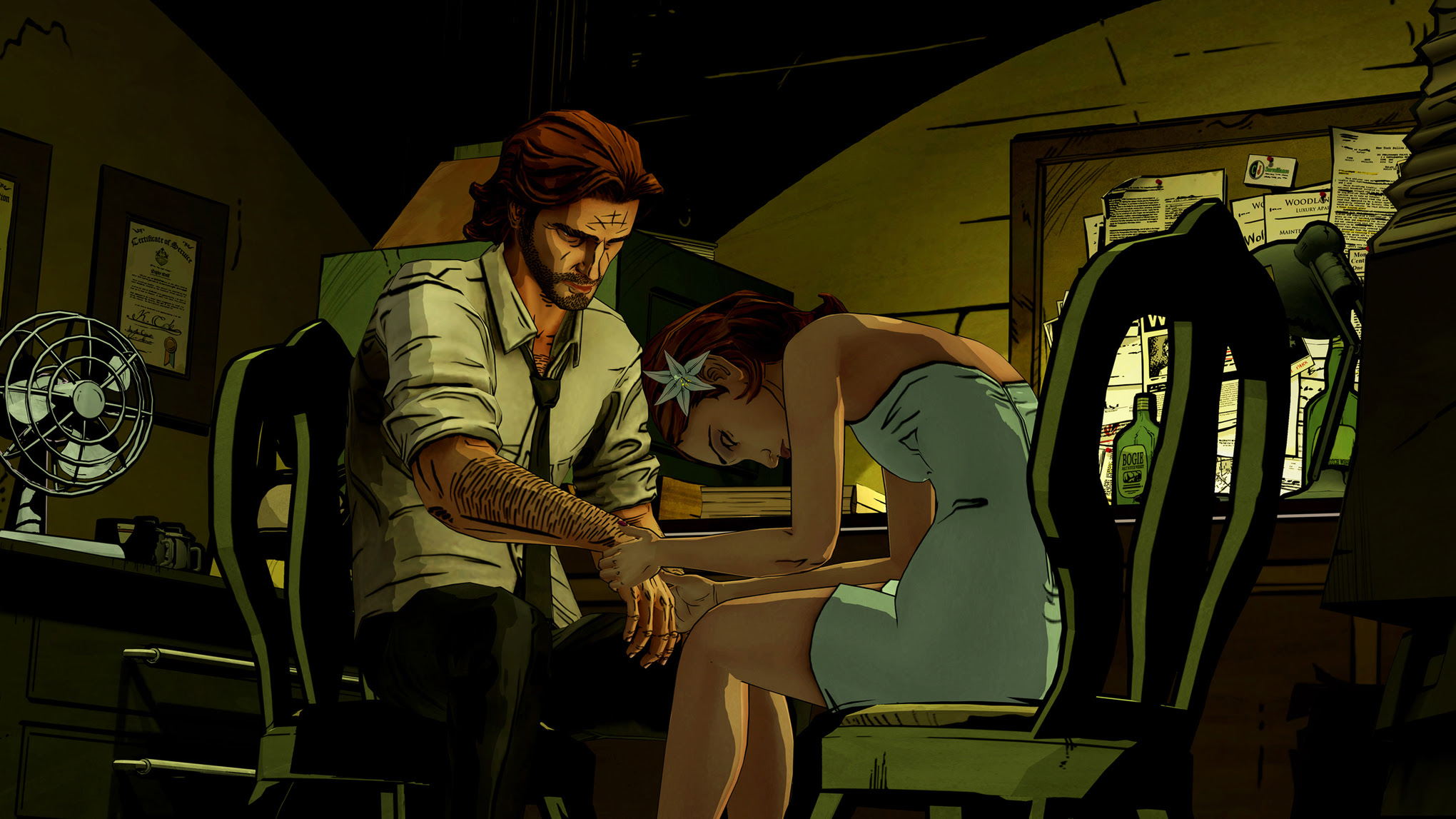 Fortunately, that proved to be true. For the most part, at least. Fables is a sprawling and epic series; as with many successful epics, it starts off with several arcs that have lower stakes and introduce you to the world and its characters, before blasting off into more universe-shaking storylines. TWAU is a prequel to the comics, and its structure and tone generally follows the mystery-story format of the early Fables books, in contrast to the more adventure-story-esque style of the superior middle sections. And, for what it's worth, I enjoyed the story of TWAU more than the corresponding mysteries in Fables. It's a fantastic full-on piece of noir, with a tight central plot, corruption, many shades of gray, and a fantastically faded, dingy, neon-tinged portrayal of 1980s New York City.

I was also impressed by how well TAWU differentiates itself from TWD, both in content and in gameplay. On the surface level, they appear rather similar. You control a single character, you occasionally move around by tapping on the screen, most of the gameplay consists of dialogues where you much select from four possible prompts before time runs out, you manage a small inventory, and complete action sequences through quick-time events that require tapping or sweeping on the correct parts of the screen. However, the feel of the gameplay turns out to be very different, which is very appropriate to the source material. TWD is ultimately a survival horror game, and you spend much of your time either fleeing from danger, recuperating with other survivors, or trying to shore up your defenses for the inevitable next assault. In contrast, TWAU is a noir mystery: you have a fair amount of power in your own right, and the focus is much more on investigating, convincing witnesses to open up to you, connecting the dots and drawing conclusions.

It also seems to be a bit easier than TWD, or maybe I'm just getting better at these games. In any given episode of TWD, I would often die once or twice during particularly gnarly zombie encounters; in TWAU, I don't think I lost the game a single time. Again, this fits well with the theme of the game: TWD should emphasize your helplessness, while TWAU tries to emphasize the consequences of your decisions.

The quick-time event format, which can be very annoying in some games, is used to great effect here. You only have a handful of fights throughout the whole season, but because each one is an individually-crafted and animated puzzle, the variety of your actions are far greater than what any fighting game could offer. You might grab an opponent's fist, then hit them in the shoulder, roll away while they attack, making them smash a table, then grab the now-loose table leg, beat them about the head with it, get tossed into the air, grab onto a rotating overhead fan, throw some debris in their eyes, and so on. It ends up being really exciting and cinematic, not at all game-y. (This was also true of TWD, but I can enjoy it more now that I'm less terrified of dying.)

As with its predecessor, you have a fantastic range of role-playing choices at your disposal. They extend beyond the expected "good cop" and "bad cop" portrayals, and you also get occasional options to express the motivation behind your actions: if you refrain from killing a mortally wounded man, is it because you wish him to suffer, or because you're unwilling to become a killer? If you lash out at a suspect, is it because they've enraged you, or because you're trying to make them spill some information? Only a few of your choices actually change the flow of the story, but most of them helped shape my personal concept of Bigby and his relationships with other characters.

TWAU includes a mixture of existing characters from the comics and new characters for the game. I liked both groups; the existing characters were very recognizable and felt continuous with their comics portrayal, while still feeling free to breathe and not totally tied to their precise look. (The difference in time probably helps this as well; Fables don't age, but they can change their style over the decades between the game and the comics.) The new characters also made a lot of sense, and in some cases I was a bit surprised that they hadn't already been included in the sprawling cast of the comics (why didn't it already include The Little Mermaid or Grendel or the Woodsman?).

In a few cases, I actually felt like the game might be even better for people who hadn't already read the comics. It fits better chronologically, since it takes place first. The game also includes several surprises and twists that, if you know what happens later; lose their impact. The most obvious example is probably Snow White's head being found on the doorstep at the end of Episode 2; that should be a shocking scene, but it was impossible for me to take seriously since I know that she can't be dead. I also sometimes felt like I had unfair information when conducting my investigation. For example, the portrayal of Bluebeard is excellent, giving the same sense as in the comics that he is up to something but not able to prove exactly what; but I knew that he couldn't be the villain, since that would have prevented him from holding the role he does at the start of the comics.

That said, the game as a whole felt very open: you know that several of the main characters will live, but not much else, including who the ultimate villain is, how the case will be resolved, how much death there will be along the way, etc. As is often the case for me, while I enjoyed the flexibility around combat and intimidation, my favorite parts of the game had more to do with political wrangling and social engineering. It felt fantastic to have a game that culminated in a (very tense!) courtroom drama scene, with careful marshaling of facts and counter-arguments, rather than in fisticuffs. I also really enjoyed your (potentially) more tender interactions with other characters; as with The Walking Dead, there aren't any full-blown BioWare-style romances, but the game does give you several choices in how you relate to other characters that nicely set the stage for affection or frigidity.

My timing is pretty great, since the final episode of Season 2 of The Walking Dead just came out, so I'll probably pick that up before too much longer. I've been waiting a long time to see what horrible things happen next in that grim saga, and I'm happy to have enjoyed a marginally more uplifting (and genuinely enjoyable, well-done) adventure before returning to the zombie apocalypse.
Posted by Christopher Charles Horatio Xavier King III, Esq. at 8:39 PM