I Made A Thing

Here’s my first-ever video, a gameplay demo reel of Antumbra Saga, set to the song “Protocol” by Invocation Array!


Here are some technical notes on how I put this together, surrounded by a long and rambling story on the project's progress.

As an opening disclaimer: I have no idea what I’m doing. This is literally the first time I’ve done any video editing, captured any in-game footage (other than screenshots), or worked with music in this way. The following steps worked for me, but a more seasoned hand could surely do something better.

I used Open Broadcaster Software (OBS) to do the capture. I tried out a bunch of other programs along the way before settling on this one. NVIDIA Shadowplay was close to perfect, but you can’t hide the mouse while capturing; I’ll probably switch to that if they ever add that feature. OBS was the most difficult to get running, but once it was configured properly, it did everything I needed it to. (If you plan on doing the same yourself, I followed the steps in this thread to get higher-quality video. The initial image was very washed out, so I enabled "Encode in Full Range", which helped a lot.) 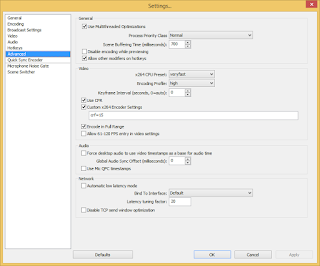 In Shadowrun Dragonfall, I ran the monitor resolution at 1920x1080, which was the same resolution I ultimately wanted to upload to YouTube. You could definitely get away with 720p here, and if you’re using a fixed bitrate, that might give you a better picture. 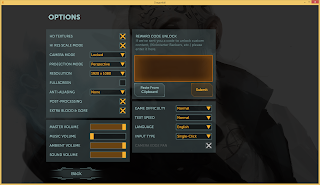 A few notes on other settings:

For video editing, I used (*shudder*) Microsoft Movie Maker. I know, I know. It was free, and already installed on the same gaming PC where I was capturing my footage. It’s definitely light in the feature department, but I didn’t want to do anything too fancy anyways for my first outing, so it worked out fine. 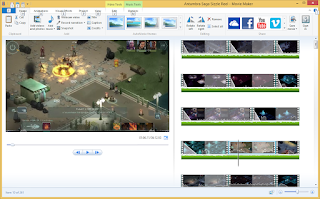 I actually switched strategies mid-stream when gathering footage for the video. My initial plan was to do a full run-through of the game and record the whole thing, with each scene saved to a different video file. Then, after doing a set of scenes, I would import them all into Movie Maker. I would take the large original files (which could be from 5 to 30 minutes long), scan through them for moments where something visually interesting happened, and cut those out into separate clips. Then, when assembling the actual video, I could search through those clips to find one that fit the tone, trim it down further to match the available time, and pull it in.

The big downside of this approach was that it took f-o-r-e-v-e-r. Actually playing through the game is about an 8-hour commitment, but it takes even more time to process the footage, and I was keenly aware that most of the result would be “wasted” (i.e., not included in the final video). On the plus side, I had built up a good-sized library of clips, so if I wanted to use, say, a shot of an explosion or a nightclub or a summoned spirit, I could find one quickly. I came to think of this as my “B-roll” collection.

This project as a whole was actually inspired by the music. I’ve been listening to A Color for Fiction a lot lately, and have been thinking about its digital humanist themes in relation to my various Shadowrun projects. I reached out to the band through their web site to see if they would be fine with me using their music in this way, and they very graciously gave me permission. Indie bands rule! I love all of their songs, but quickly zeroed in on “Protocol”: it has a terrific mix of dramatic and frenetic music that I thought would mesh very well with Antumbra’s legwork and combat.

As I started setting those clips to the music, I got a better idea of what I was doing. I broke the song down into its various parts (intro, verse, chorus, riff, verse, chorus, bridge, etc.), and identified a mood or energy level for each (ominous, high-energy vocal, high-energy instrumental, etc.). Then, I broke each of those parts down to its component pieces: for example, a verse might have 4 lines and a total of 8 feet. I measured the length of each of those to see how much time I had to work with; for this song, it was often around 4 seconds for a single foot in the verse and about 2.5 seconds for each cycle of the guitar after the chorus.

I had enough footage by this point to start filling in the video. After dragging in the source audio, I pulled in the opening clip of your runner running through the streets of Everett towards Club Antumbra, then trimmed it further so it ended on a natural cycle of the intro. From here I faded into another clip of running through The Mission District, and so on. Once the first verse started, I began cutting in clips of speaking with NPCs, hoping that the dialogue of speech would mesh with the vocals of song.

In some cases, I selected clips based on the lyrical content: when Cerys sings “My eyes I shield,” I bring in Hailey and her visor. On the line “Digital dust blowing over the battlefield”, you see Hailey decking in the matrix, hacking a data store node. More often, though, I just tried to match the energy of the music with the energy of the visuals. The more deliberate passages of the song got matched to legwork and puzzle-solving, while the explosive chorus is matched to combat encounters, and the heavy guitar riffs tend to play over gruesome deaths.

On the whole, I’m pretty happy with how it worked out, though I’m sure a more experienced producer (or, heck, someone with ANY experience) could have made some tighter cuts. One particular thing that took me a while to figure out was just how to get my transitions to line up properly. I would often listen to the song, find a beat where I wanted to transition, cut the clip to end on that, then bring in the following clip. When playing back, though, the transition would start earlier than I wanted. I eventually realized that, in Movie Maker, the time you set for the animation duration is applied to both clips equally: so, if your clip ends at 1:24, and you set up a 2-second transition, then it will start fading out at 1:22. (Apparently, other programs like Final Cut Pro give you more control over this so you can specify whether a timecode should be aligned to the start, end, or midpoint of a transition.)

On the same topic: this project was a huge education in a lot of ways, not least of which was figuring out what was meant by “cut” and “wipe” and “dissolve” and when each should be used. I did a lot of reading, watched a lot of music videos and video game trailers and movie trailers and stuff. It felt a little like I had taken the red pill: all sorts of essentially subliminal things that I have never really paid attention to before are now really obvious to me. I’m curious if that will continue in the future, or if I’ll be able to turn off that part of my brain while watching movies and TV shows.

Anyways: based on near-universal advice, I decided to keep things fairly simple. The final video only uses fades, dissolves, and cuts. I initially had a single wipe that hit exactly on the beat where Cerys’s vocals first appear; I kind of liked it, but chickened out and replaced it. I only use a couple of fades, each 1.5 seconds long, which play during the longer dramatic instrumental sections; I think they’re evocative of movie trailers. I generally use 1-second dissolves when switching between legwork scenes during the verses. These kind of subliminally signal that we’re moving to a new location and time. Finally, I used quick cuts between the combat scenes in the chorus and during the riffs: it’s a bit disorienting, but it’s meant to be disorienting, and feel like the violence is piling on.

By this point, I “understood” the song and video enough to get a vision for what the final product would look like. I listed out each “slot” available for a clip, each keyed to a short section of music. In some cases, I had already filled the clip; in others, I knew I had “B-Roll” footage that I could use for it. In the remaining cases, then, I would need to get new footage to cover it.

So, at this point, I shifted from a more documentary-esque process to something closer to a scripted film. For each remaining clip, I decided what scene I wanted to use (showcasing a variety of maps in the mod), then thought about what encounter in that scene would fit best. Now, instead of playing through the whole campaign in sequence, I could jump ahead to the part I was interested in and just record that one part.

Of course, since this is a game, there’s still a lot of variability: sometimes you miss your shot, sometimes you get a critical hit, sometimes the NPC makes an interesting choice. Once I had a scene setup, I would run through multiple takes until I got one that I liked. Not unlike what I imagine making a movie is like!

This second phase of the project went much quicker than the first, though it’s hard to tell how much of that is because it’s inherently faster and how much was due to my increasing “skill”. (I feel like I spent a single Karma point in the Video Editing Skill.) Each shot took a lot more preparation, but this was more than made up for by the elimination of unneeded segments and a faster time “editing”. I also had a lot more confidence here, since I could regularly play back the video as it progressed and see how things were coming together.

The outro of the song lasts for a while and is lower-energy, so instead of showing gameplay footage I did my “branding” here - a brief glimpse of my cover art and then a title splash. I was a bit hesitant about using the flashy Movie Maker animation here, but ultimately could not resist since it literally depicts an antumbra, visually contrasting it with the umbra and penumbra.

And, that was it! I didn’t have any post-processing or anything; I played through the video a few times to make sure I was happy with it, then uploaded it to YouTube. My initial motivation was to show the video as a trailer in Steam, so I hooked it in there, as well as through Nexus Mods.

So, yeah, that was the thing I made. It was a lot of fun! I’m far from an expert, and don’t think I’ll be making a lot more in the future, but I enjoyed learning something new. Working with music in this way was particularly great, a way for me to engage with it despite having no musical talent. All in all, this ended up being a really satisfying project, with a great little artifact at the end for me to keep and share with others.
Posted by Christopher Charles Horatio Xavier King III, Esq. at 10:01 PM