I just realized that I didn’t write up my experiences with the new Extended Edition of Shadowrun: Hong Kong! Let’s rectify that!

This is the promised mini-campaign sequel to the core game of Hong Kong, which was unlocked when the Kickstarter campaign reached its ambitious million-dollar stretch goal. The incentive was that all backers would get the mini-campaign for free. Harebrained Schemes ended up doing one better: they’ve updated the base game, replacing it with the Extended Edition at the same price, so everyone who bought Hong Kong got the new content for free. Pretty nice!

The visitor in Gobbet’s room


Length and pacing. The mini-campaign has 3 story missions and 2 side missions. That’s long enough to feel like a meaty chunk of story - I started playing Friday night and finished Sunday morning with a couple of breaks along the way. But it isn’t overwhelming. The ratio of story to side missions felt really good, and was a nice change of pace from Dragonfall and Hong Kong, which were both primarily side-missions. 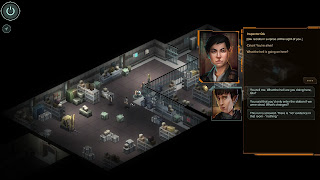 New content. There don’t seem to be any new abilities, but are some really nice new weapons. They verge on the overpowered, but since you get them so late in the game it felt appropriate.

Lore. I got a particular kick out of a chat with a CalFree expatriate and my investigation of a Shiawase bioweapon lab, both of which had nice loose ties to the world I’ve been building in my own CalFree campaigns. 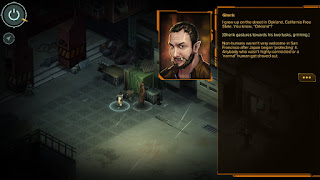 
No new animatics or music. I didn’t necessarily miss them, but they did make this feel more like a well-crafted user-generated campaign than a full official sequel.

Ending choices. (MEGA SPOILERS AHEAD.) It’s a tough choice, which is very Shadowrun-y, but also felt arbitrary and frustratingly limited. I had a very clear outcome in mind that I wanted: save the warehouse, turn it over to Mitsuhama, let Duncan clear his SIN, and have me and the rest of the old gang hired by Mitsuhama as a runner team. I liked Qiu more than Kindly, and it felt like this would be an optimal solution for everyone. It felt frustrating to have to choose between being a jerk to Duncan and staying with the rest of the team, especially when everyone owes me big favors and should be happy with that solution anyways.


As with every previous game in the series, there are a shocking number of typos in the initial release. I’m sure that these will be swiftly patched, but I’m kind of astonished that, after putting out four of these games, they still haven’t figured out a good proofreading/editing/playtesting system to catch these in advance.

No improvements for UGC. This is a selfish complaint, but I had been desperately hoping for a couple of fixes, particularly restoring the missing music and fixing a nasty bug with saved games and crew advancement. Neither was included, and the saved-game bug seems to have even metastasized and crossed over into the official content.


This was a fun expansion, and hey, it’s basically free. It’s a bit lower-stakes than the main Hong Kong campaign, but still an exciting story that helps wrap up the arcs of the various characters we’ve encountered. 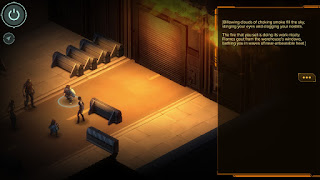 It’s also likely to be the last Shadowrun video game for the foreseeable future. Harebrained Schemes has said that they’ll be focusing on their other projects (notably Battletech and Necropolis) for the foreseeable future. They may come back to Shadowrun at some point in the future, but HKEE will almost certainly be the last game built on this technology: any future game would probably be rebuilt from the ground up, most likely with more modern production values.

That’s a bit of a shame - I’ve loved these games and have really enjoyed the entire journey, from the initial Kickstarter announcement back in 2012 through the final epilogue in the mini-campaign. This is a pretty good note to add it on… I really wish that the developer had cleaned up the editor offering more so there could be a more vibrant user-generated content scene during the interregnum between games, but on their own terms these are good games that will probably be remembered for their well-crafted stories and memorable characters.

EDIT: Here is my requisite album. It has spoilers.
Posted by Christopher Charles Horatio Xavier King III, Esq. at 6:59 PM