The works of China Mieville have been on my radar for many years. He’s often brought up when people discuss Fallen London, a gothic Victorian web-game that I’ve enjoyed playing. Fallen London is such an odd, unique, specific game that its fans have very few alternative sources to get more of the same; it isn’t like a fantasy role-playing game where you have your pick of many competing titles in the same genre. 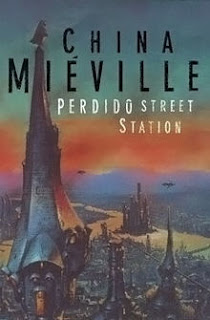 I picked up Perdido Street Station, the first of China’s books in the New Crobuzon series. It’s fantastic. Really dark, macabre, depressing, well-written, fully-realized. I should avoid comparing books to other books, but to me, it felt like the spawn of an unholy triple union between Cormac McCarthy’s Blood Meridian, the works of HP Lovecraft, and Terry Pratchett’s Ankh-Morpork books. It combines the relentless pessimism of the first book with the eldritch horror of the second author and a setting that feels like a nightmare vision of the third.

Much like Fallen London, it’s difficult to quickly summarize Perdido Street Station to others. I’ve fallen back on “Lovecraftian steampunk,” which sort of gets at it but isn’t quite right. The overall setting FEELS Victorian, but isn’t, really… this isn’t Earth, it’s another world, complete with both alien species (the bug-people Khepri, the lizard-people Vodyanoi, the bird-people Garuda, and the cactus-people Cacti) and different metaphysics. Magic isn’t just real, it’s the subject of study, centered in its own version of Unseen University. Parallel dimensions aren’t just theory, they’re well-established reality, and the source of frequent threats. The overall technology level does roughly parallel that of late 19th-century London, including trains, dirigibles, pistols, and daily newspapers, along with pneumatic tubes and political parties. There are some elements that do feel particularly steampunk, most notably Constructs, golem-like automatons driven by steam power who use mechanical systems of switches and flywheels as their on-board computers.

The adjective Lovecraftian doesn’t really get at the tone, either. The Slake-Moths do seem like Lovecraftian villains, and the focus on madness and the loss of the mind are very reminiscent of Lovecraft. But the writing styles themselves are very different. Lovecraft was all about absence, writing around topics that were too scary to directly address, building up a sense of horror at the unspeakable. Mieville is all about specificity, detail, lingering over every bubbling pustule and blood-stained tooth and writhing tentacle. It can feel overwhelming at times, and it is relentless.

His writing is very vivid and powerful, and before long the corrosive miasma of New Crobuzon settles over you, filled with decay and filth and corruption. It’s a very distinct vision of entropy that he presents here. Not the long and graceful decline of Tolkien’s Middle-earth, but a self-satisfied wallowing, a bureaucratic malaise. We don’t get the sense that New Crobuzon was a once-great city that has fallen. We get the sense that people have always been a little selfish, a little cruel, a little deceitful, and all of those small sins have accumulated over a millennium into the rotten edifice that they now inhabit.

My favorite example might be the weather machine. Centuries ago, in an effort to protect the city from reality-warping winds, they built a vast edifice that can control the weather. But it's fallen into disrepair now. Nobody has bothered to tear it down, so it still looms over the city, awkward and ugly and useless. It has its own bureaucracy, employing people who uselessly attend the inert machines. No-one knows how to fix it, or could operate it even if it was fixed. It's just one more thing for people to complain about, another pointless eyesore on the city's landscape.

One thing that surprised me was just how many strong parallels I found between this book and details in Fallen London. I don’t necessarily think that Failbetter directly adapted parts of this book, but both might be drawing from similar original sources, or have coincidentally stumbled on the same flavor. Anyways:

The Brass Embassy <==> The Ambassador from Hell

That said, while both works share a quasi-Victorian setting that’s literally quite dark, the overall feel is very different. FL is occasionally scary, but more often is delightfully weird, indulging in melodrama and humor as often as the macabre. It is kaleidoscopic where Perdido Street Station is relentlessly focused on maintaining a single discomforting mood.

Both settings do delight in unusual characters. Isaac is a fascinating choice for the protagonist of a story. He doesn’t fit the visual mold of the typical hero, being massively overweight. His background is unusual as well: he’s a disgraced academic, a lousy teacher who squandered his reputation by pursuing overly abstract research goals. He now ekes out a marginal existence, accepting occasional research gigs that give him an opportunity to pilfer laboratory equipment.

Over the whole arc of the book, though, Isaac reveals himself to be a very sympathetic character. Yes, he can be blustery and selfish, but he’s very self-aware of his own faults, and pushes himself to be better. He offers an appealing mixture of ethics and rationalism: he believes in doing the right thing even when it’s hard, and overcomes his fear with his dispassionate judgments of what must be done.

Isaac is a through-character, but up until the end I was never sure if he would last. The book surprised me again and again with the characters it killed off: people who had been built up to seem like crucial elements of the ongoing story would be brutally and/or casually knocked off, increasing the overall sense of hopelessness and shoving the story forward.

There are a ton of plot threads that arise and become prominent but are not resolved by the end of the book. Ordinarily that would annoy me, but in this case it feels like it’s being done in service of worldbuilding. A horrifying as the Slake-moths are, they’re just one of the many, many issues with which the world must grapple. I’m not sure if future books deal with Rudgutter and the Weaver and the Construct Council and Jack Half-a-Prayer, but even if they don’t, just the knowledge that they’re still lurking in the world makes things a little bit weirder, a little big more dangerous.

The biggest dangling thread of all might be the crisis engine itself. It was fascinating to realize that, among the most powerful forces behind New Crobuzon, this source of perpetual energy was a bigger threat than the moths. Money is more important than the lives and minds of the city’s citizens. That’s very dark, but also feels depressingly believable for any world in the multiverse where people are motivated by greed.

This was a great, horrifying book. I’ll probably try a palette cleanser before proceeding to The Scar, the next book in the series, but I’m sure I’ll reach it
Posted by Christopher Charles Horatio Xavier King III, Esq. at 9:25 PM