I've finally reached the point that I've dreaded for so long: exhausting my supply of David Mitchell novels. It's been a long and winding journey, grabbing individual novels as they become available at the library or as opportunity strikes, without much concern for publishing order. Semi-coincidentally, though, the last book I read is also the last one he wrote. Slade House is the most slender volume he's published yet, and is very good. 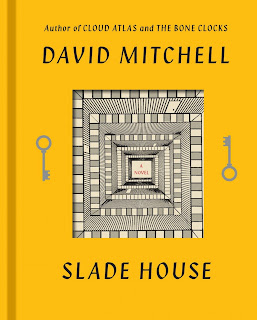 I often emphasize Mitchell's varied settings and writing styles: on their face, there's very little connecting Black Swan Green to The Thousand Autumns of Jacob de Zoet to number9dream. Slade House is a bit of an outlier in that regard since it ties so strongly to the story of the preceding novel, The Bone Clocks, to the point where it almost feels like a companion novel. Still, it's stylistically innovative, like many of his other books: more formal and constrained than I was expecting, but that formalism is put to very good use.

This ended up probably being the most frightening of all of his books. I don't necessarily think of his novels as being "scary," although he's very good at creating disquieting, vaguely sinister scenarios. There are a few times in the past when he's crossed over the line into full-on dread, like Enomoto's shrine in The Thousand Autumns or anything relating to the Blind Cather in The Bone Clocks. But both of those were smaller (albeit important) scenes in larger, adventurous, reflective novels. Slade House captures that feeling of despair and wickedness, and compresses it and repeats it, amplifying and resonating with itself, to the point where you're afraid to see what will happen next.

Even beyond the very obvious tie-ins to The Bone Clocks, Slade House has its own connections to other stories in Mitchell's shared universe. Enomoto himself is referenced, as an evil mentor to the Grayer twins. Rita Bishop seems to be a descendant of Vyvyan Ayrs. Much of the specific terminology of the Grayer’s system comes from The Bone Clocks, but I was reminded of the curious etymology of “Orison” to describe a virtual reality, and wondered again whether it has any connection to similar technologies referenced in Cloud Atlas and number9dream. It’s weird to think that a psychic power could somehow turn into a mass-market consumer good… but perhaps that will be shown in a future novel, or perhaps capitalists will create a technological counterpart that’s inspired by stories of this spiritual talent.

From the scene of Nathan’s demise onward, it’s very clear that we’re dealing with some Anchorite-ish situation; the details of the ritual are different from that of the Blind Cathar, but the deal with the chakra eye and the soul and such show that the essence is the same. We don’t get an explicit linking until several stories in, when Sally’s would-be boyfriend Todd starts dropping some very specific terminology: orisons, banjax, lacuna.

One thing that really confused me at the time, and that I still haven’t figured out, is whether Jonah was really playing Todd or not. On the one hand, he says that he was, and we know from the Freya chapter that he’s perfectly willing to share details of their operation with victims once they’re safely enmeshed. On the other hand, though, there doesn’t seem to be any reason for Jonah-as-Todd to say the things that he does say: he uses words without bothering to define them, and many of his actions seem to confuse her more than entice her. On the first hand, though, the most damning thing is that Norah DID point Sally towards the game room, where Todd was waiting. And the twins do seem to particularly enjoy toying with their prey, so they may have thought that it was too easy otherwise.

Still, part of me wants to believe that we were watching an attempt by a Horologist (or some other beneficent ally) to save Sally. After all, this is the one time in the book that someone is able to get back DOWN the stairs once they’ve been lured up, and a lot of the other details of their escape ring true. And even if Todd really was who he said he was, I can still imagine Jonah lying and saying that it was him: he says something to Norah like “We’ll need to tell her or else her spirit will taste funky.” So he crushes her dreams and hopes: not merely of escape, but of feeling loved. I dunno. I’m probably grasping at straws here, but that idea really tempts me.

Oh, as a side note, I almost wish that I was at that party since the music sounded AWESOME. They’re playing Bjork and Massive Attack and The Orb… so many of my favorite groups, all in one horrific haunted house!

Back to Todd - there are significant overlaps between him and Fred Pink. From Sally’s chapter onward, I’d thought that Fred Pink had always been Jonah in disguise, luring victims to the house. It seemed like way too big of a coincidence otherwise, that this one random guy would HAPPEN to draw people who just HAPPENED to be Engifted to their doom on the exact “right” day. During Freya’s chapter, I initially thought that Jonah was Fred, then thought that he wasn’t, then found out that he was after all. But! The way Jonah describes his impersonation makes it sound like this is a fairly recent development - he talks about finding Fred’s notes and research, which makes it sound like Fred was really on his own for a while.

I’m still not sure exactly what happened there. Maybe Fred really was who he said he was, though, again, that feels a little too convenient and coincidental. Although, I suppose that “coincidence” might actually be the Script at work. More likely, maybe Jonah occasionally suassioned him, in a subtle and limited enough way that he didn’t realize the role he was playing. Or maybe he DID later figure it out - I can imagine his horror at reading through the Grayer’s histories and realizing that he himself had been a pawn in their schemes, and wondering whether he was still doing their work.

That’s quite a nasty surprise at the end of Freya’s chapter. After being through the Slade House deception so many times, we as readers have been lulled into a false sense of security: this all seems like it’s taking place outside, perhaps in preparation for an assault on the dwelling. Once it’s revealed, though, it all makes sense and feels like fair game. The earlier victims have spent time in false environments outside the house, like Nathan in Rhodesia.

I was really curious how Mitchell was going to top that, and was astonished by the decision to have Norah narrate the final chapter herself. That was great as well, and also oddly satisfying: of course, we immediately recognize Dr. Marinus-Fenby, even if the Grayers do not, and know that they’ve signed up for more than they bargained. It’s a nice parallel to most chapters of the book, where we also know more than the narrators about the danger they’re about to face.

The ending proper is fantastic, firmly tying everything back in to The Bone Clocks while also casting it out into the broader world. Slade House has been so claustrophobic and inward-looking; now it is destroyed, but its evil is loosed upon the world. Scary stuff!

I, um, really liked this book. The Bone Clocks increasingly feels like the single most important key in deciphering David Mitchell’s various novels. Slade House is the simplest lock that it opens, and also helps illuminate its predecessor novel. Granted, it illuminates it with a sinister light, but hey, that definitely fits Mitchell’s overall philosophy. There is true evil in the world, along with a moral need to do good, and we must recognize the evil if we are to stop it.
Posted by Christopher Charles Horatio Xavier King III, Esq. at 8:36 PM