Witcher? I Barely Know Her!

After finally beating The Witcher 3 and both of its expansions, I can say that I’ve come around to it. Part of this is the result of me adapting to its quirks, and part is the ongoing improvement of the series itself. Like the best expansions, TW3 seems to identify its strengths and weaknesses, and improves on both fronts in its additions. 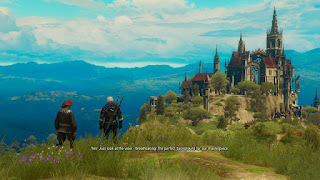 I can’t say that The Witcher is my favorite franchise; that crown is still held by Dragon Age. I CAN say that The Witcher 3 is the most beautiful video game I’ve played, and is tremendous fun in its own right. The level of craftsmanship on display is astonishing, and it can serve as a model for how open-world RPGs should work.

One of the best parts of the latter half of the game is Ciri. She isn't playable as often - maybe not even as often as she was in the flashback sequences of the first half - but she's present for much of the action, and adds a great energy and flavor to the story. 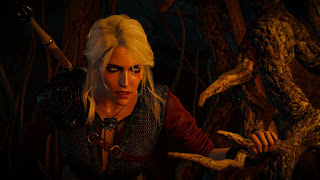 The women in general finally get a chance to shine in the last act. Ciri and all of the sorceresses are a big focus of the late game, and they're shown to be extremely talented. They're not always sympathetic, which is also good - the Lodge of Sorceresses schemes and jockeys for power, not necessarily good or evil but always interesting and useful. 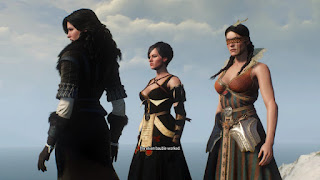 I find that I actually don’t have all that much to say about the conclusion of the main plot itself. It was good, but I think I missed out by not playing the earlier games and not being familiar with the source novels. It makes *sense*, and they do a good job at catching you up on previous plot elements and characters, but I think I just wasn’t as deeply invested in the Wild Hunt and the world in general as I would have been otherwise. 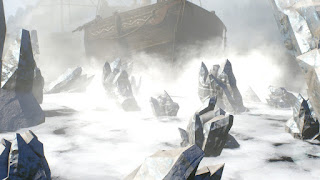 After chatting with my brother and poking around online, it looks like there are several elements of the ending that can vary. I’m mostly happy with how things turned out, with the major exception of having Radovid on the throne in the North. Apparently I missed the quest to depose him near the end of the game; as soon as I located Ciri, I became very focused on driving the story forward to its conclusion and so failed to revisit the various hubs that might have pointed me towards it. 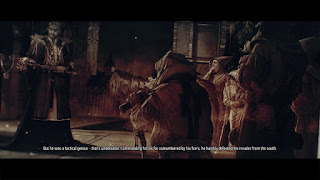 Otherwise, though, things turned out basically as I would have hoped. Cerys is a wise and talented ruler in Skellige. Ciri survived her ordeal and returned, becoming a renowned witcher in her own right. Geralt and Yennefer relax and enjoy one another’s company. Not too bad! 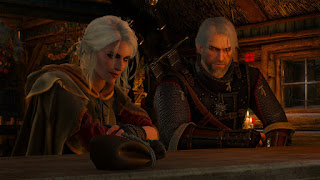 I did kind of love how Ciri’s story is treated near the end. As she’s heading off to face the White Frost, she says something like “This isn’t your story.” And I really liked that. We’ve been mostly playing as Geralt, but the world doesn’t revolve around him, and it doesn’t revolve around us as the player. By forcing us to step back and not participate in the narrative climax, the game becomes much broader: it feels more like a world in its own right, and not just a powerfulness simulator. (At the same time, it also made me wish that we could have played as Ciri, who is so much more interesting to me than Geralt.)

Hearts of Stone was a good, nicely focused expansion. There’s a single shortish side-quest, but pretty much everything is part of a long and well-constructed main plot line. There are several very well-drawn characters, a nice romance option, quite a few fun new non-combat activities, and some really creative new environments. 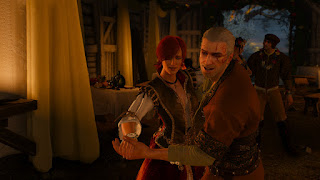 I didn’t like Olgierd; he was a victim of Gaunter’s manipulations, but was already a bad guy prior to that, leading a band of raiders and practicing black magic. Still, when it came to the end, I decided that Gaunter was worse and fought to get Olgierd back his soul. This led to an incredibly well-designed and nail-bitingly-tense sequence where you have to explore a huge dreamlike area while fighting monsters and solving puzzles before time runs out. I’m still processing the design of that mission, and think that there are elements I can steal for future content. 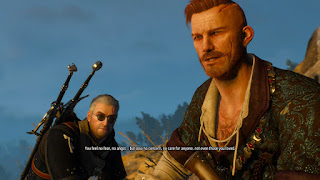 Blood and Wine was very different from Hearts of Stone: where HoS is narrow and focused, B&W is ridiculously expansive. Toissant, the new zone, is GORGEOUS. I already thought that The Witcher 3 was the most beautiful video game I’ve seen, and Toissant just blew it out of the water. Everything from the design of the landscape to the architecture to the color scheme was astonishing, like a storybook fairy tale. 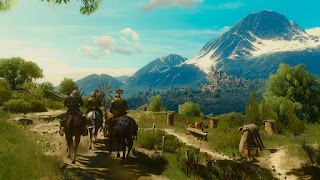 And that’s before you get to the literal storybook fairy tale, which somehow makes things EVEN MORE PRETTY and left me drooling on the floor. It feels almost unfair that the game is this well crafted. 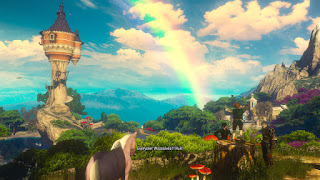 The world is so great that I wanted to just spend time in it, and so, for the first time since White Orchard, I actually took the time to ride around to random quest markers, clearing out bandit camps and finding hidden treasures. Once again, I was really impressed by how well they create a story for every little thing. It’s never “just” a bandit camp: you can piece together the story of how they became bandits, and who they robbed, and what they planned to do, and what they did with their treasure. Stuff that is mechanically ephemeral becomes narratively intertwined with the larger themes of life in Toissant: the five Virtues, the power of the Duchy, the refugees from other lands. 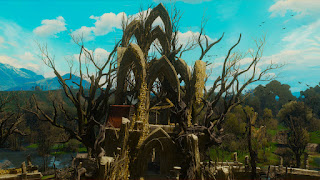 I was initially mostly impressed by the world-building, but the main plot is also terrific. Duchess Anna Henrietta adds yet another entry to my list of awesome characters in this game: she has much of the determination of Cerys, but acts as one trained from birth to rule, with a supreme confidence in her actions. 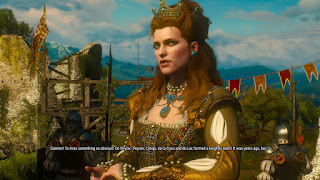 And then there’s Regis. I was surprised by how much I liked him, to the point where I started idly wondering why they hadn’t made Regis the main character of these games instead of Geralt. He has some of the same understated quality as Geralt, but I found him far more likeable. His voice acting is wry and generally good-natured, while still remaining healthily skeptical. 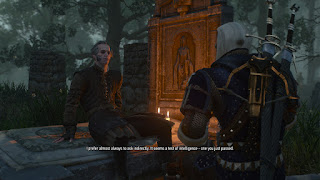 I keep harping on Geralt, and I’ll never love him as a protagonist, but as before I found myself becoming more and more fond of him as the game went on. Part of this may be Stockholm syndrome, but I think it’s also due to getting to see him in new situations and seeing his humanizing quirks. He really does love Gwent and is obsessed with playing it. He tells a group of children that the world isn’t fair, but that it’s still important to be good. He develops a minor interest in non-Witcherly topics like viniculture. And, while he continues to get paid for all of the various deeds he does, there are more and more opportunities to express some other motivation for doing them: because they’re right, or because he feels sympathy, or out of curiosity.

All that being said: As far as I know, there hasn’t been any announcement yet for The Witcher 4. I’d be happy to see it, but I’ll be even more happy if it switches to a new protagonist. Geralt has ended up more likeable than he started, but if CDPR can somehow combine the quest and environment design of TW3 with a hero who I like (or, better yet, a group of them), then they’ll have a great shot at claiming the top tier of my affection.

Okay, photos! Here are all my albums. During the course of this playthrough, Google shut down Picasa, my favored means of hosting these albums. I’m currently using Google Plus Photos instead, which I kind of hate but is the path of least resistance for now.
Part 1 (previously shared in my initial post)
Part 2 (was linked to in my previous post but may not have been viewable at the time)
Part 3 (end of the main campaign)
Hearts of Stone expansion
Blood & Wine expansion

All contain many spoilers! None contain nudity, but may have some NSFW images.
Posted by Christopher Charles Horatio Xavier King III, Esq. at 5:15 PM