So, um, yeah. The Cat Lady just might be the scariest, most disturbing video game I've played. It's kind of hard to evaluate entries in the genre; in much the same way it's tough to compare the fear generated by The Haunting to The Descent to Psycho, it's hard to compare System Shock 2 to Silent Hill 2 to The Cat Lady. But I'm pretty confident in saying that The Cat Lady probably has the most pernicious, sustained, permeating sense of dread. Every element of the game seems to be decaying, curdling, coming apart and revealing the horror that lies beneath. 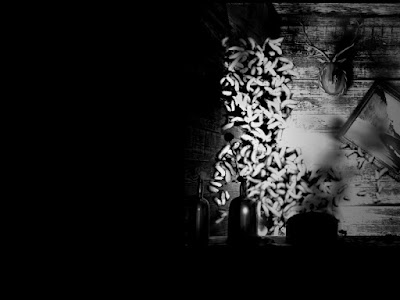 Some other horror games are more focused, tuning in on one particular type of experience: enemies creeping up on you from just outside your field of vision, or sudden onslaughts of violence, or frightening imagery. The Cat Lady, while on its surface a very simplistic presentation (two-dimensional images, one-dimensional movement, mostly black-and-white graphics), manages to draw on an amazing range of tools to disorient and disgust. Those simple backgrounds twist and fade and flicker, calling their own reality and the protagonist's sanity into question. Tiny bodies expel unearthly screeching. And blood! Blood spurting everywhere, or discovered as evidence of past traumas. 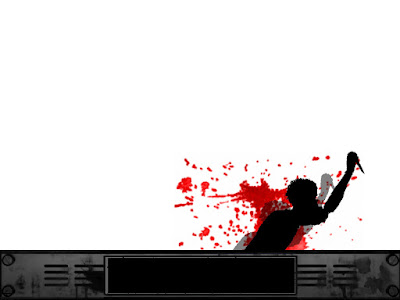 There's plenty of violence in this game, but it takes many forms. There's the threat of violence, dangled over characters, freezing them or alarming them. There's active violence, often abrupt and unexpected, but sometimes premeditated and sadistic. And above all there's the evidence of violence, the awful discovery of untold misery that has paved the way and ended or destroyed prior lives. Which, of course, sets up the threat of future violence to echo the past, continuing the cycle.

All of this is very convincingly sold through the simple-but-relatable character designs, married to some really fantastic voice acting. One of my few quibbles with the game is that, while the actors all have terrific vocal tones (English accents FTW!), the technical quality of recordings can vary quite a bit. This was a low-budget game, and I get the impression that many or most of the actors just used their laptop mikes to record, so you'll sometimes get a subtle background hum or popped P's. Still, the emotion behind the dialogue is so persuasive that it didn't interfere with my enjoyment at all.

The game starts with the protagonist committing suicide. Things rapidly get worse for her. 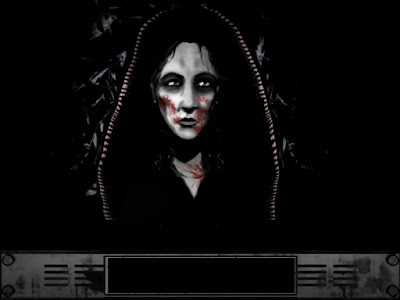 As is often the case for these sorts of games or movies, Susan's plight is inextricably tied to questions of her sanity; these become explicit in the second chapter, when she wakes up in a psychiatric hospital, under observation after her "failed" suicide attempt. The root question is: did she really meet "The Queen of Maggots", and is she really immortal? The answer, within the context of the game, seems to be a tentative "Yes": it's possible that her earlier experiences were just hallucinations as part of a near-death experience, but she really does seem to come back to life after her subsequent murder. I suppose it's possible that this entire sequence is a hallucination, but if so the entire game would seem to be suspect, and I don't think there's enough evidence to support that. (That said, it is really interesting to see Susan's movement and perception visibly alter while she's on medication; these effects are very similar to her death experiences, which is one small suggestion that they are a mental rather than a physical journey.) 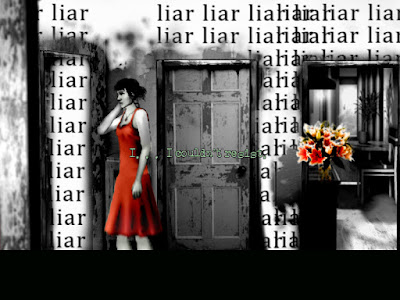 So far I've just been talking about the content of the game. The story and presentation is the main star, but the gameplay is sometimes used to great effect, immersing you in Susan's plight rather than just linking scenes together. I think the best example of this comes in Chapter 3. This is the one part of the game that directly deals with Susan's mental state. You receive two meters, one for her anxiety and one for her comfort. Anxiety ticks up whenever something happens to distress Susan: an object breaking, the lights going out, catching sight of an object with a troubled history. Any one of these can cause a large and abrupt jump in her distress. By contrast, every time Susan takes care of herself, her comfort meter rises just a sliver: paying her bills, cooking a hamburger, enjoying a cigarette. 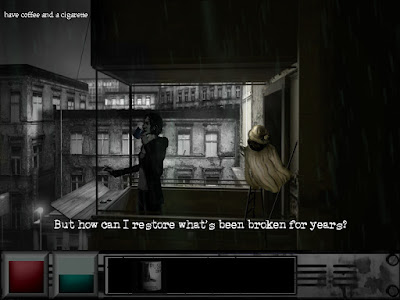 It's all so fragile. I already cared about Susan, but being responsible for her in this way increased my motivation tenfold. On my first attempt, her night ended poorly: after an argument with her neighbor, she fell into a spiral of despair, cutting herself and sobbing throughout the night. I took advantage of the fact that this was a video game and not real life: I reloaded, peeked on Google to see how to make things better, and played through it again. Things that don't even register to me in real life became quiet and significant victories: keeping the lights on, making a nice cup of tea.

I get the impression that some people will particularly enjoy The Cat Lady for how it presents and represents depression, treating it seriously and exploring it without sugarcoating it. In my case, the game has made me realize just how lucky I have it. I'm incredibly fortunate in my personal life, and the strong pillars of support I have underneath me allow me to just shrug off things that might send someone else into a tailspin of sadness. If I scorch my pan while cooking dinner, I'll sigh, laugh at myself, then order a new one online and grab something else from the fridge to eat. But someone who already has a negative self-narrative might see this as yet another chapter in "Chris Can Never Do Anything Right" and/or "The Universe Is Out To Get Chris," and might become non-functional while working through the sadness.

Ultimately, this section strongly motivated me to be kinder. We don't know how secure or insecure the strangers in our lives are, and even small gestures from us can have enormous impact. Even tiny things like keeping a seat open on the subway, or responding with a smile rather than a frown after someone bumps into you, might continue to reverberate for the other person long after I've forgotten it.

The "sanity meters" were a clever addition; I kind of wish that they'd been present in more of the game, although it would have been hard to maintain their effectiveness over a longer time. In general, The Cat Lady tends to play out as a traditional adventure game: you move around, collect items into your inventory, and figure out how to use them to solve puzzles. For the most part, these are pretty logical, and given enough time you can puzzle them out on their own. I think there were just two times that I needed to resort to Google to find a solution; in both cases I felt retroactively justified, as the solutions weren't very intuitive. (In one case, you need to turn on a hot water tap, then keep it running for a minute until it steams up the room to reveal letters written on a mirror. The physics make sense, but it's not an intuitive action to take.) I think I also spotted a couple of visual allusions to Maniac Mansion, which was pretty amazing. 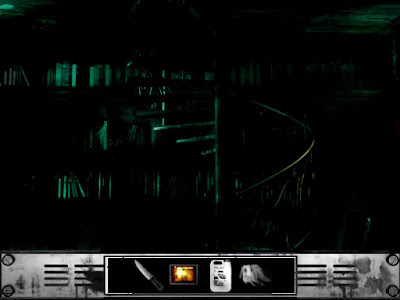 The game is divided into seven chapters. Each has a really good, strong focus: there's an overarching plot, but also very specific self-contained goals and mechanics within each sequence. I found myself wondering whether the creators had originally intended this as an episodic game, which seems to be the preferred way to distribute adventure games these days and would have lent itself rather well to this story.

They do a great job at gradually spinning out the plot over the course of the game. Some bombshells are dropped relatively early, which sort of lurk beneath the surface for a while, before finally being revealed and explained. These aren't exactly plot twists, more of an ongoing exploration and fleshing-out of a really sympathetic three-dimensional character.

I was slightly disappointed that they ultimately gave an explanation for Susan's depression. It honestly felt more compelling to me when it was mysterious and unexplained; I spent much of the game imagining that Susan had just slowly aged into her depression, which seemed more alarming and relatable to me than the eventual revelation that there was a Big Dark Secret Past responsible for her suffering. That said, though, given that they did give a background for her condition, I thought it was a great one: it was unique and unexpected, with a fantastic level of detail (that argument is agonizing) that makes it feel like a genuine core of the character and not a contrivance to place her into this situation.

I'm still mulling over Susan's epiphany that the Queen of Maggots is her own self-hate. That seems to call into question the reality of the QoM, which in turn appears to invalidate Susan's immortality. While playing I'd interpreted this as an internal mental conversation or hallucination of some sort. After considering it more, though, I'm leaning more towards the idea that the QoM is a "real" externalized entity that was created by Susan's despair. Maybe somewhat equivalent to the Guardian of Ultima IX, or gods as depicted in American Gods or Discworld: created through mental energy, but able to physically impact the world once created. 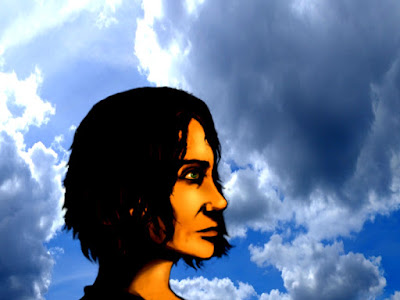 I was really surprised, and delighted, to have a genuinely happy ending. I was not expecting that at all! The whole game was relentlessly bleak and dark, with only a few moments with Mitzi breaking through with little sparks of light and grace. It felt incredibly earned, though: we ultimately see that this has been a long, hard journey that Susan has been on, and at the end she finds what she could never have hoped for: hope itself, and a reason to keep on living.

I'll have a hard time making any blanket recommendations for this game, thanks to its gory and disturbing content. Still, players who are able to stomach the dismal elements will be richly rewarded. Yes, the game is unremittingly bleak and dark; but that same darkness helps the brief flashes of light shine all the brighter. It treats forbidden topics of depression and suicide with such candor that it earns the right to show a path forward. Not with a saccharine assurance that everything will be okay, but with small acts of grace and bravery.

Albums! I'm increasingly frustrated with Google, whose legacy Picasa infrastructure is falling apart at the seams, and am actively looking for replacement photo-hosting services. In the meantime, here are a whole bunch of pictures from the game. WARNING!!! These contain a little nudity, and a lot of gore, and are absolutely not safe for work by any stretch of the imagination.
Chapter 1: House in the Woods
Chapter 2: Second First Breath
Chapter 3: River
Chapter 4: Bullet for Susan
Chapter 5: Some Flowers Never Bend Towards the Sun
Chapter 6: Legend of Cat Widow
Chapter 7: Don't Feed the Troll